‘I want to throw up’: Irish gelato parlour goes viral for creating a KETCHUP-flavoured ice cream that is dividing fans – so would you try it?

There used to be just three flavours of ice cream – chocolate, strawberry and vanilla – but these days, there are much more unusual options available.

The newest flavour to hit an Irish ice cream parlour is a bizarre ketchup-flavoured frozen treat, and the unusual savoury creation is dividing fans.

Thousands have blasted the light red gelato on social media, saying that the pictures make them want to be sick.

But despite the backlash, the parlour says the ice cream has proved so popular that it is struggling to make enough to keep up with demand. 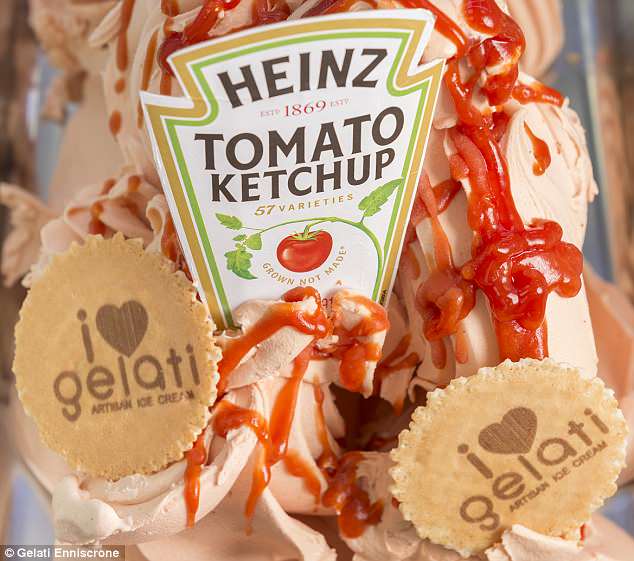 The unusual flavour is the brainchild of the owner of Gelati Enniscrone & Ballina in Irishcrone, Ireland: Micheal O’Dowd.

He was inspired to make the bizarre concoction by Ed Sheeran ahead of his Irish tour because of his love of red sauce.

The singer is so in love with ketchup that he even has a bottle of the condiment tattooed on one of his arms – but he’s yet to try the ice cream.

Mr O’Dowd told the Independent.ie: ‘The initial reaction people have before tasting the flavour isn’t good but after they taste it there is definitely a positive reaction. It’s a bit like spicy ice-cream.’ 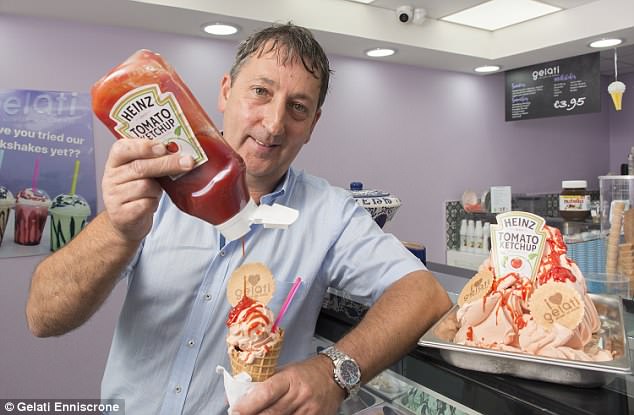 In a statement, he added: ‘We thought of the idea because Heinz Tomato Ketchup superfan, Ed Sheeran is currently performing in Ireland as part of his world tour, and so we thought it would be a bit of fun to create him and his fans a very special ketchup inspired ice cream to celebrate.

‘We didn’t think our gelato would get so much attention, but it is so popular that we are struggling to keep up with the demand.’

The new ice cream went viral after a video of it being made emerged on social media.

It has now been watched more than 2.5 million times.

Ashley White, UK marketing manager for Heinz Tomato Ketchup, said: ‘We love the idea of creating a special ice cream with the world’s number one tomato ketchup. What a perfect way to cool down on a long hot summer’s day.’

The ice cream is free for anyone who has a ticket to see Ed Sheeran live in Ireland, but you can also buy it.