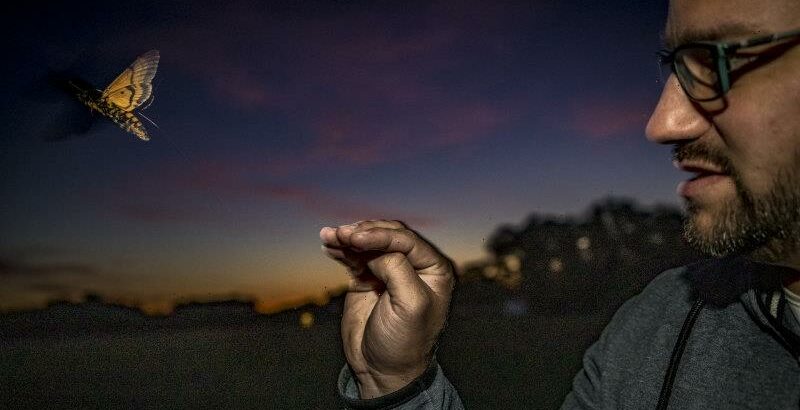 The number of insects that embark on global journeys dwarfs that of migrating mammals and birds, yet we understand little about the world-sweeping movements of tiny invertebrates.

That’s why James Cook zoologist Dr Myles Menz spent nights on end in a tiny Cessna light aircraft, flying over the foothills of the Swiss Alps, tracking the flight of a skull-patterned moth renowned throughout history as a harbinger of death. 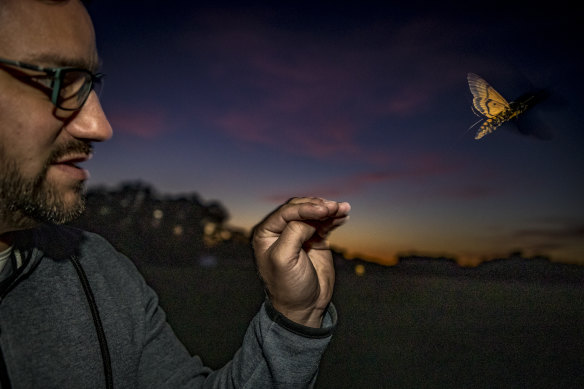 “There really is a pulse of insect movement across the planet,” Menz said. “We have species that are pollinators moving, there’s lots of crop pests that move, and [insect migration] also provides food for other animals.

“Understanding what insects do during migration, and how they respond to weather, is a last frontier in migration science.” 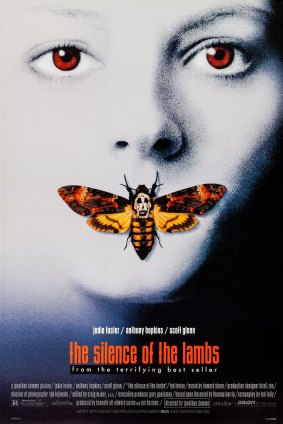 The moths gained notoriety from 90s thriller flick The Silence of the Lambs.

The movement of insects can be studied to some degree via observation and genetic analysis, but it’s a “formidable challenge” to track insects in any detail due to their tiny body size and highly mobile nature.

Menz’s study, with the Max Planck Institute of Animal Behaviour, was a world-first attempt at live-tracking a nocturnal insect by glueing a tiny tag to the bodies of death’s-head hawkmoths and following their movement – in real-time, and while airborne – across Germany.

The death’s-head hawkmoth was chosen for their study because they’re large and can handle the tracking tags, and its suspected they venture on an epic migration from Europe to Africa.

Thanks to the distinctive marking behind the moth’s head that resembles a black-eyed, hollow, human skull, the species has had a long association with the macabre.

In the 19th century the moth was denounced by an entomologist as a “device of evil spirits” that foretold war, disease, hunger and death. The genus hawkmoths fall under, Acherontia, is drawn from the “river of pain”, Acheron, in Greek mythology.

In modern times the moths haunted the cover art for 90s thriller flick The Silence of the Lambs. And they’re the boogeyman to the bees; the hawkmoths feed by creeping into bee hives and feasting on honey. (Some entomologists hypothesise the skull marking resembles a worker bee, and the moths emit an odour that disguises their presence in the hive.) 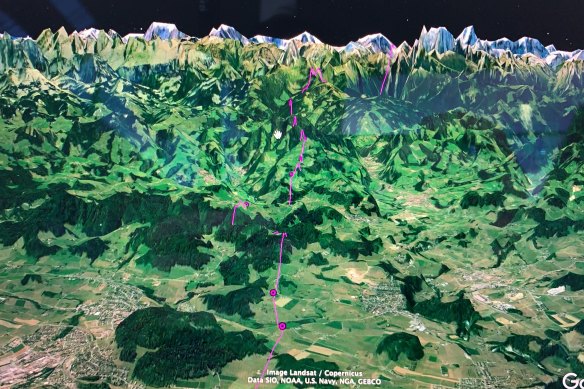 The flightpath of a death’s head hawkmoth towards the foothills of the Swiss Alps. Credit:Max Planck Institute of Animal Behaviour

They also emit an audible “scream” when prodded.

But Myles revealed another eerie aspect to the moths: even on gusty nights, they travel long distances in a dead-straight line.

“It is really quite incredible. They can hold these very straight tracks and actually maintain them over quite long distances. People [thought] insect migration was really very much just driven by winds.”

Myles said the navigation tactics of the moths were akin to birds. On a strong tailwind, the moths flew higher and slower, allowing the winds to propel them forward. On gusty nights they hugged the ground and fought back on crosswinds, maintaining a decisive direction from Germany across the lowlands, and then into the foothills of the Alps.

Myles tracked one moth that travelled an epic 80 kilometres over four hours. He said the moths must be navigating using external cues and an internal compass.

“We’ve seen from Bogong moths in Australia that they can detect the Earth’s magnetic field and can navigate by that field,” said Myles of their navigation, adding that to travel accurately they were probably using visual landmarks like mountaintops to aid their flight.

Now back in Australia, Myles is keen to track species of butterfly and hoverfly, and discern the movements of our own species of migratory hawkmoths.