Australia is on track to have a COVID-19 vaccination available for those who want it by the end of 2021, Health Minister Greg Hunt says, after preliminary data showed one of the four vaccine candidates was highly effective.

Immunology and infectious diseases experts said the news was promising but more information on its safety and ability to stop the spread of the virus was needed. 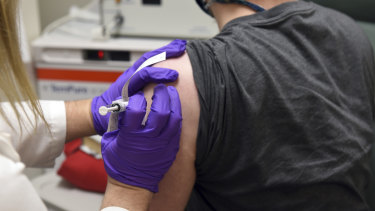 Pfizer and BioNTech said preliminary results showed the vaccine was 90 per cent effective.Credit:AP

In the first results released from a late-stage COVID-19 vaccine trial, Pfizer and BioNTech said their mRNA-based vaccine was 90 per cent effective. So far, there had been no serious safety concerns with the vaccine among the roughly 40,000 trial participants, they said.

Mr Hunt said the data on the vaccine candidates "continues to be positive".

"We will examine the evidence carefully but the latest results are heartening news," he said. "The goal and the expectation is that Australians who sought vaccination will be vaccinated within 2021."

Professor David Tscharke, head of the department of immunology and infectious disease at Australian National University, said the results were not yet published in a peer-reviewed study and all information about the trial was not yet available.

"It's important that people understand this isn't an overnight miracle but the results are coming out at the higher end of efficacy that we hoped," he said.

Professor Tscharke said it was difficult to judge the vaccine's effect on infection and infectiousness at this stage.

"There is inevitably going to be some impact on infection and transmission and that's the key thing we want to know: Will it protect people or will it stop the pandemic?"

There were also questions about how long protection from an mRNA vaccine would last, he said.

mRNA vaccines work by training the immune system to recognise part of a virus's genetic code and prompting an immune response.

Professor Robert Booy, a University of Sydney infectious diseases expert, said the Pfizer and BioNTech preliminary results were "very exciting" but some caution was needed.

"There's never been a mRMA vaccine licensed and used routinely in humans, therefore we have to retain some sense of caution around its introduction," he said.

Professor Booy said the candidate's safety would not be known for certain for a while as both predictable and unpredictable side effects could develop up to a few months after it was administered.

"As much as it's incredibly exciting, it also needs follow-up to allow people to be confident that it's well tolerated and doesn't cause side effects," he said.

Mr Hunt has previously said the vaccination program will be voluntary. Health and aged care workers as well as the elderly and the vulnerable would be the first to access the vaccine.

"Our flu vaccines were at record levels this year, so we're confident that we'll have a high take-up amongst the Australian population," Mr Hunt said. "Our job is to make sure that it's safe and effective and available."

Given a large amount of this type of vaccine had never been made or distributed before, Professor Booy said "there will inevitably be hiccups".

Professor Tscharkie said there was no existing global distribution for a vaccine of this type. While it was possible, it would be more expensive, he said.

"The critical thing is it requires ultra-refrigeration and that can be difficult to maintain," he said.

Late last week, Mr Hunt said Australia was capable of rolling out a COVID-19 vaccine, including preparing for temperature requirements ranging from 8 degrees to -70 for each of the vaccine candidates.