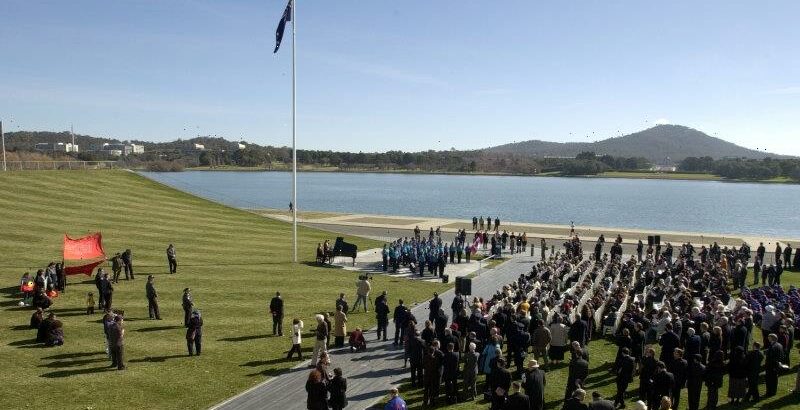 A new Indigenous cultural precinct will fill a void in the heart of the nation’s capital and tell the long story of traditional owners in Australia while offering a place for the repatriated remains of unknown Indigenous people.

The federal government will fund the $316.5 million institution in Canberra, to be named Ngurra meaning “home”, “country” or “place of belonging”, after a years-long campaign by the Australian Institute of Aboriginal and Torres Strait Islander Studies. 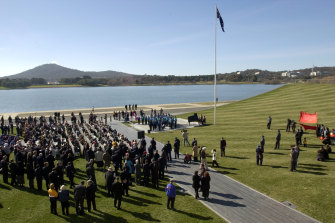 Ngurra will be built in Commonwealth Place, which was officially opened in 2002, on the southern shore of Lake Burley Griffin.Credit:Fairfax Media

It will be built in Commonwealth Place, on the southern shore of Lake Burley Griffin about halfway between Parliament House and the Australian War Memorial.

Craig Ritchie, the institute’s chief executive, said the parliamentary zone was the place where the story of the nation was told. Institutions there include the National Gallery, National Library, National Archives, National Portrait Gallery, High Court, and the Museum of Australian Democracy at Old Parliament House.

“The thing that’s been conspicuously absent, with the singular exception of the Tent Embassy, has been an institutional embodiment of the place that First Nations people have in the story of this country … which isn’t 250 years old, it’s 65,000 years old,” he told The Sydney Morning Herald and The Age.

“It seemed to us at AIATSIS that there was a real opportunity there … to fill that void in that institutional telling of our national story.”

The precinct would become a new home for AIATSIS, currently located on the lake’s west basin, giving it exhibition and education spaces for the first time along with modern collection management infrastructure.

“There are lots of national institutions in this city and around the country that do a really good job in addressing or telling First Nation stories, but we’re the only one that does within a framework of Indigenous governance and with Indigenous voices as central to what we do,” Mr Ritchie said.

Ngurra will also include a national resting place to care for Aboriginal and Torres Strait Islander ancestral remains. Mr Ritchie said this would not be somewhere to hold burials, with the strong preference still being that remains were returned to their traditional lands whenever possible.

However, he believed building the national resting place would give “significant impetus” to the return of remains from overseas, and it would host remains that were unable to be identified. 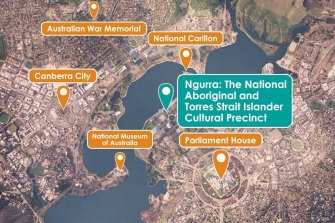 A design competition for the precinct is expected to begin within a month, although it is likely to be a lengthy process.

Minister for Indigenous Australians Ken Wyatt said the learning and engagement, exhibitions, research and curation that would occur at Ngurra would be significant acts of truth-telling.

He said in instances where the provenance of remains had been forgotten or erased, “they will be cared for in perpetuity with dignity and respect”.

“Ngurra will provide a new perspective on our shared history, as a significant moment for truth-telling, and a new place where the diversity of Indigenous Australia and one of the world’s oldest living cultures will be celebrated,” Mr Wyatt said.

Prime Minister Scott Morrison described it as a world-class facility that would contribute to Australia’s continuing journey of reconciliation.

‘It will be a national landmark of the highest order, standing proudly for us all to celebrate, educate, reflect and commemorate.’

“It will be a national landmark of the highest order, standing proudly for us all to celebrate, educate, reflect and commemorate,” he said.

Several proposals for an Indigenous institution and resting place in the parliamentary precinct have been put forward, most recently by Howard-era minister Brendan Nelson. Liberal backbencher Andrew Bragg has also discussed the idea and Labor backs the development of a resting place.

The AIATSIS proposal for Ngurra has been developed over several years. May’s federal budget included funding for a business case and now the government has committed to its construction.

A design competition for the precinct is expected to begin within a month, although it is likely to be a lengthy process. AIATSIS will also hold consultations, including with Indigenous people, about the scope and governance of Ngurra and what needs to be included.

The construction is likely to take three or four years.