Spoilers ahead! Avengers: Infinity War is upon us, and despite the title, the film doesn’t actually go on forever. Once those credits start to roll there’s only one question on fans’ minds: how many post-credit scenes does Infinity War have, and are they worth sticking around for?

Short answer: one, and absolutely. Unlike past films, including Guardians Of The Galaxy Part 2′s multiple mid-credit interruptions, Iron Man 3‘s peek into superheroes’ off-the-clock personal time, or The Avengers‘ winking post-action scene at the really great shawarma spot, Infinity War‘s final segment hearkens all the way back to the scene that set things in motion: the end of Iron Man.

You see, back in 2008, Marvel kicked off and set up the trend of post-credit scenes with a Sam Jackson Agent of S.H.I.E.L.D. character reveal that had fans’ heads exploding with excitement. Since then, the studio’s post-credits reveals have become so ubiquitous that fans know to stick around to catch them. Marvel’s even taken the opportunity to mess with expectations, like with the tongue-in-cheek capper at the end of Spider-Man: Homecoming. Fans waited until the bitter end of a verrrry long credit roll only to have Cap break the fourth wall and let them know that "sometimes patience is the key to victory. Sometimes it leads to very little, and it seems like it’s not worth it. And you wonder why you waited so long for something so disappointing." Boom, cut to black. 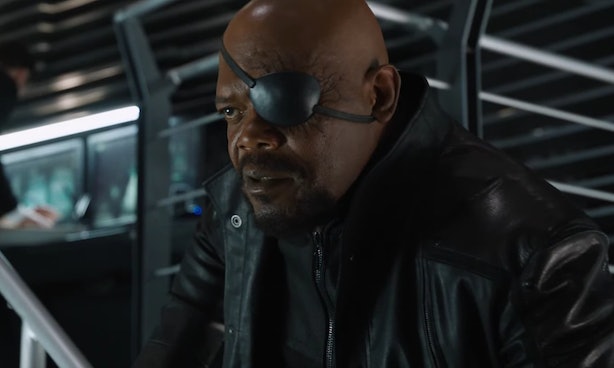 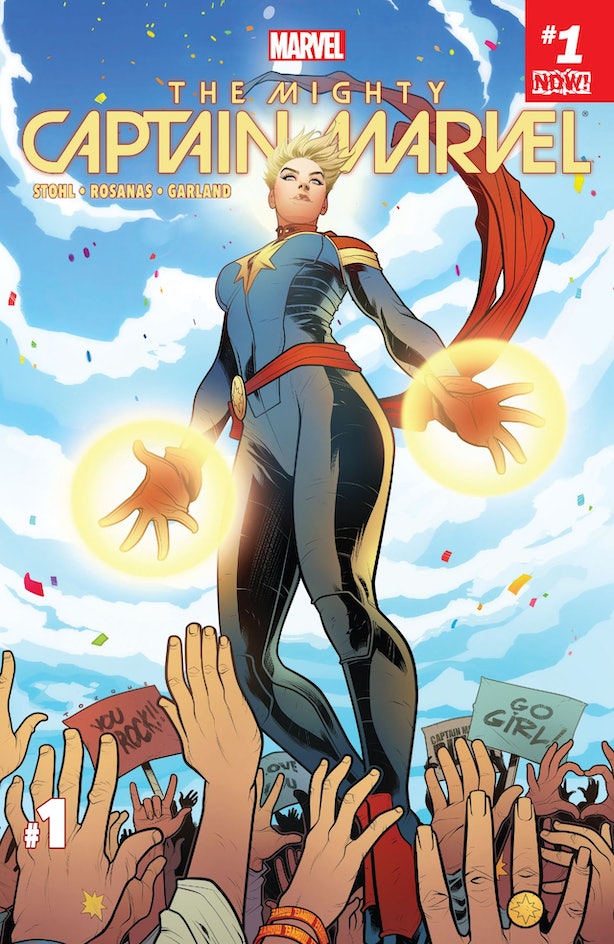 For those not shrieking with recognition already, Captain Marvel is an immensely powerful character in the Marvel universe, part Kree with the ability to fly (including through space unaided), superhuman strength, immunity to most poisons and toxins, and "cosmic awareness" that allows her to predict people’s next moves. She can absorb energy to increase her own strength, and blast photons from her hands as well. And excitingly, the Marvel Cinematic Universe will soon include a standalone Captin Marvel movie with Brie Larson as as Carol Danvers.

President and producer of Marvel Studios Kevin Feige is 100 percent on-board with the upcoming version of the character, telling Variety that with the Captain Marvel movie, “You’re going to get the most powerful superhero that we’ve ever introduced with, I think, one of the most unique and inspiring origin stories.” The film is currently slated for release in 2019, so fans will have to wait until then to see if Feige is exaggerating.

One question fans might immediately ask: if Captain Marvel’s so powerful, why did Fury wait until the last minute to call her in? It’s probably due to the hero’s time travel capabilities, which might help bring all those dead Avengers back to life in the next movie.

Interestingly, Captain Marvel was set to make an appearance in Infinity War; in 2017 IGN reported that Larson was shooting scenes, but later that year at San Diego Comic-Con directors Joe and Anthony Russo announced she wouldn’t make the cut.

The hero will likely make her second appearance in next year’s Avengers 4, with the first coming in her solo movie, an action-comedy set in the ’90s. For those still sore at Fury’s fatality, that film will apparently feature a pre-eyepatch Nick meeting Captain Marvel as his very first superhero encounter. That might explain the direct hotline beeper. For now, the small teaser at the end of Infinity War is all fans have to go on, but it promises a heck of a lot.