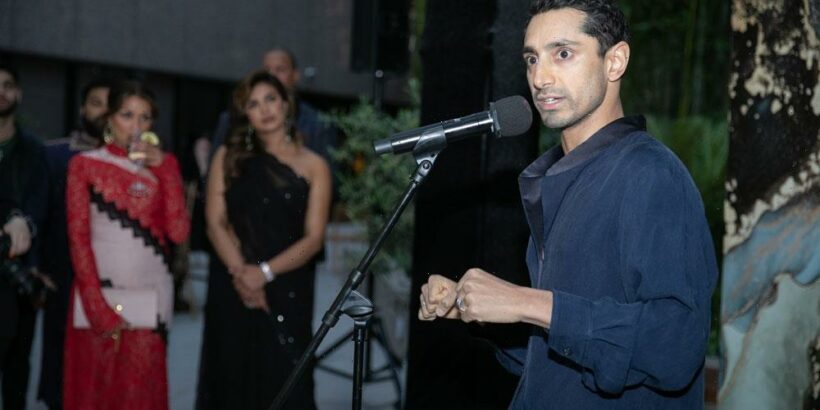 Hollywood is out and about Los Angeles in the days and nights leading up to the Oscars. Here, Variety reporters go inside the hottest parties and events.

Happy Birthday, Quentin Tarantino! W’s editor in chief Sara Moonves surprised the director with a birthday cake at about 9 p.m. While some of the star-studded crowd sang “Happy Birthday,” Tarantino quickly blew out the candles as his handler unsuccessfully tried to stop onlookers from taking photos and video of the celebration.

The magazine’s annual Best Performances party is usually held the Friday night before the Golden Globes at Chateau Marmont but was postponed to Oscar week due to the pandemic. It was also located to hotspot eatery Gigi’s — the party was outside adjacent to the restaurant — in the wake of Chateau owner André Balazs’ allegations of sexual misconduct and reports of treating his employees unfairly during the pandemic.

Austin Butler and Kaia Gerber kissed and posed for a photographer shortly after they arrived and before Butler made a beeline for Wilmer Valderrama.

Party co-host and Louis Vuitton creative director Nicolas Ghesquière, greeted guests as they entered the party via a dark walkway lit by the dizzying glimmer of a disco ball. Moonves introduced Ghesquière to Maya Rudolph and Paul Thomas Anderson, who was carrying a hardcover copy of Donald Knox’s 1973 book “The Magic Factory: How MGM Made An American in Paris.”

Guests had to show proof of full vaccination and a negative COVID test taken within 48 hours of the party. —Marc Malkin

The Ebell of Los Angeles, March 24

In spite of a venue switch due to the pandemic and a missing honoree due to COVID-19, the Oscar Wilde Awards still maintained its usual Irish charm as it kicked off at the Wilshire Ebell Theater instead of its usual hub at emcee JJ Abrams’ Bad Robot Productions in Santa Monica, Calif.

Before the awards ceremony began, guests, who were required to be vaccinated to attend (both shots and a booster) mixed and mingled, toasted Oscar WildeTini and Irish Gimlet cocktails, and noshed on a variety of eats, including fish and chips and vegan enchiladas.

“This is an incredibly formal [ceremony], very serious, and no one takes a risk,” the “Star Trek” director, who was dubbed an “Honorary Irishman” at the 2010 awards, joked about the vibe of the event before heading inside. “I think you can see it’s fun. And I think after a couple years of not being able to do this, a lot of people are feeling a relief to get to sort of hang out again and toss back some Jameson and Guinness and enjoy the night.”

Adam McKay, Jamie Dornan, Dónall Ó Héalai and Kenneth Branagh were all honored at the event. Branagh was recently diagnosed with COVID-19 and couldn’t attend, but did send in a video acceptance speech.

Dornan told Variety that he’s keeping his fingers crossed that his “Belfast” co-star will be able to attend the Oscars on Sunday.

“We’re all gunning for him and hope he can make it,” Dornan said. “He and Ciaran Hinds are both in the same situation. So hopefully, he will pass the fitness test and we have them with us. I can’t even imagine going on Sunday night without those guys.”

Inside the event, Dornan kept the crowd laughing as he accepted his award, even pulling out a pair of silver handcuffs, Christian Grey-style. “I’ll start with something you’re familiar with,” he quipped. He went on to take a more serious turn, getting emotional as he called working with Branagh in Belfast, “the greatest honor of my career.”

Mary Steenburgen introduced McKay and dished about their best moments working together on “Step Brothers,” praising the director, too.

“The fact that somebody can be so outrageously funny, and still have the heart and the passion to make films about the environment, about hypocrisy, who shine the light on the injustices in the world the fact that all of these things are in this man’s absolutely brilliant career makes him a rare, and Irish, and loud and sometimes obscene bird,” she said.

As Ó Héalai accepted his “Wilde Card” award, he recalled how he “nearly quit acting” and moved from New York City to Buffalo, N.Y. He was later sent the script for “Arracht,” which changed his life. “Buffalo taught me what can come into your life if you stop chasing things,” he told the crowd, later adding that an Irish proverb continues to ring true for him in his career. “It’s in each other’s shelter that we survive and thrive as people.”

Ironically, as “King Richard” director Reinaldo Marcus Green presented Ó Héalai with his award, he said the “Arracht” star helped him push forward when he was a struggling filmmaker in New York with a ton of student debt. He told Green to keep going and that he was “so close.” He was so right. —Brandi Fowler

The annual ceremony paid special homage to a quartet of stars — Aunjanue Ellis, Quinta Brunson, Nia Long and Chanté Adams — honored for their contributions to the “Black Cinematic Universe.” Those four joined the more than 50 women honored by the magazine over the last 15 years.

Among those previous honorees is Lena Waithe, who remarked to Variety on the red carpet that the event is essentially a family reunion. She explained, “It’s an amazing sorority that we all pledged. We’re sisters.”

“Snowfall” star Damson Idris, one of the few men in attendance, emceed the luncheon. “I thought they mistook me for Idris Elba,” he joked about booking the gig.

Four-time Oscar-nominee Will Smith dropped by to salute his “King Richard” queen and present her award.

“If there’s a central word that describes Aunjanue Ellis, it’s integrity,” he shared onstage. “What’s beautiful about being friends with Aunjanue is that she demands it of you in the most loving way.”

Ellis then delivered a near nine-minute barn-burner of a speech that galvanized the audience full of women already clapping, cheering and yelling the Delta Sigma Theta “Oo-oop!” call in her honor. Ellis meditated on the work she’s “done in the dark,” including those roles that have gone unseen or unheralded, particularly by white institutions.

“And yet I did it anyway,” she declared. “The work I did in the dark, fed and clothed and put roofs over the heads of people that I loved. My work sustained a movement to remove physical tools of segregation in my home state of Mississippi.”

Speaking to the crowd — which including Serena Williams and her “King Richard daughters” Saniyya Sidney, Demi Singleton, Mikayla Bartholomew, Layla Crawford and Daniele Lawson — Ellis noted that this glorious awards season run, this “moment of shine, of luminosity” will eventually pass. Her next job won’t be with Smith and it might not be loved, but she’ll continue to push on. Why?

“I have to because every day I wake up to fight against my certain annihilation,” she explained. “Those who would obliterate me as a Black American. Outside these doors right now, there is legislation all across this country that seeks to keep the names of [Civil Rights activists] Medgar Evers and Fannie Lou Hamer outside of curriculums, outside of the mouths of students and children.”

Adams and Brunson were next up, accepting their honors from “Roxanne Roxanne” producer Mimi Valdes and “Atlanta” creator and star Donald Glover, respectively. Long accepted her honor from “Love Jones” costar Larenz Tate.

It was an emotional afternoon for the legendary actor, who got so emotional on the red carpet that she had to take a break mid-interview when she began to tear up. Onstage, Long explained why she was overcome at being honored by Essence in “phase two” of her career.

“My kids are here; my mother’s here. I’m seeing this beautiful group of new young Black talent who are just taking over the world,” she said. “I’m seeing old friends; I’m seeing just us in all of our greatness. And so there are those moments in your life that take your breath away and I’m just gonna lean into the fact that I’m emotional.”

Hollywood’s South Asian powerhouses gathered in UTA’s courtyard to toast a historic milestone — this year’s Oscar hopefuls include 10 South Asian nominees. “I think it’s really important for us as a community to recognize that and celebrate it,” event co-host Priyanka Chopra Jonas told Variety. “I’m so proud to see that and honor excellence that I could only dream would happen when I came to work here. We’re making strides in that direction. We have 10 nominees this year, which is more than we’ve ever had.”

Speaking to the crowd, which included nominees Riz Ahmed, Fatima Mirza, Aneil Karia, Joseph Patel, Anurima Bharghava, Pawo Choyning Dorji and Gulistan and Elizabeth Mirzaei, Chopra Jonas choked up with emotion. “We’re creating a sense of community for each other,” she said. “We’re creating a community that not just celebrates each other, but offers shoulders to stand on.”

She added, “I haven’t been stepping out anywhere. But I had to come here tonight, just to say this, that I am highly proud to be rubbing shoulders with all of you, to be encouraging you, to be offering a sense of help [and] support.”

Ahmed, nominated this year as a producer for live action short for “The Long Goodbye,” also offered remarks. “This has been a beautiful community over the years of people just trying to help each other, support one another,” he said. “We’ve been meeting often in private to try and encourage one another. It’s really emboldening when you’re surrounded by people who share your experience because you realize you’re not alone. You feel less afraid to share that experience and get out there.”

Kal Penn looked out at the crowd and recalled his start in the business. “Certainly 20 years ago when I moved to Los Angeles I didn’t think I’d be coming to something like this,” he told Variety. “I could only imagine 20 years from now and what that will look like.”

“Climate change can be solved” was the over-arching message, if agriculture moves away from animal production and embraces biotech. Payne invests in psychedelic medicine, while Questlove, who backs innovative food companies such as NotCo, was too busy promoting “Summer of Soul” to join. Celebrity vegan chef Matthew Kenny served ravioli made with Perfect Day’s non-dairy ricotta and tacos with Abbot’s Butcher meatless chorizo, while cocktails were served with bourbon from Wesley’s Brother’s Bond Whiskey, which he blends with actor Ian Somerhalder. “We drank bourbon often while we were shooting the show,” Wesley said. “One of our missions is to give back a percentage of all of our sales to regenerative agriculture. I’m a vegan and animal rights activist. I think (these products) could be the end of animal products being one of the leading contributors to climate change.” —Pat Saperstein