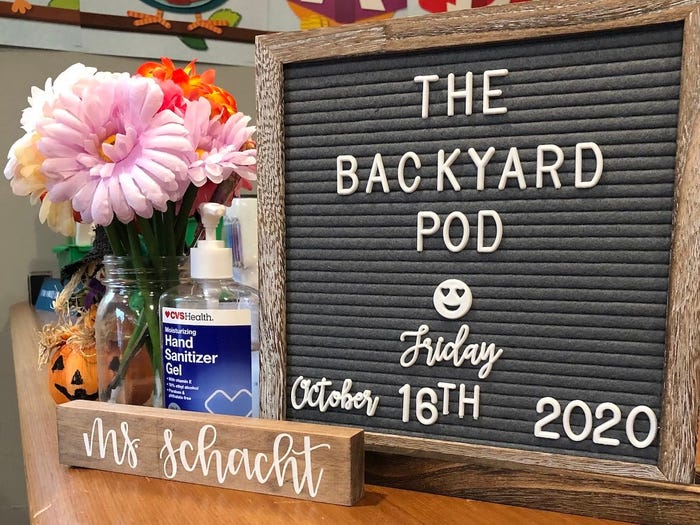 Around 8:15 a.m. each morning, seven first-graders arrive at their schoolhouse.

It's not the bustling elementary school they're familiar with, and it's also not their living rooms, kitchen tables, or playrooms where they spent spring learning virtually.

Their schoolhouse is a light blue shed that sits in the backyard of a home outside of Boston, Massachusetts.

Inside are colorful chairs, school supplies, and classroom decorations.

The group calls themselves "The Backyard Pod."

Maggie Schacht is their teacher. This year, instead of teaching in a school system, she's employed by parents while teaching their seven first-graders.

The pods, which can range in size and grade levels, are small groups of students learning together. Families across the country have established pods as a middle ground between in-person and full virtual learning.

Facebook groups have sprung up with tens of thousands of members, and tutoring and babysitting sites have seen drastic increases in requests this school year.

Schacht shared with Insider what it's like to be a pod teacher, and how she and a group of parents transformed a backyard shed into a schoolhouse fit for students.

Out of work and out of options, Schacht welcomed an unusual job proposal

Last school year was Schacht's first year of teaching. She was a kindergarten teacher for a class full of students.

Together, the class faced the challenges of the novel coronavirus. Their classroom had been moved online, and Schacht learned to quickly adapt.

But Schacht faced another challenge at the end of the school year, school budget cuts led to her being laid off.

Without the stability of a job, Schacht spent the summer tutoring some of her former kindergarten students.

Through conversations with parents, Schacht saw the tough decision families were having to make for the upcoming school year.

"They were not comfortable with the knowledge that they would have about how clean the spaces were, what steps the district was taking," Schacht told Insider. "It was a matter of trust and control."

The families considered their options and settled on a pod-style learning approach. They asked Schacht if she was willing to be their teacher.

Schacht told Insider that searching for a teaching role during the pandemic was challenging.

Schools were unsure of what fall would look like, and therefore permanent roles were hard to find. Schacht said she likely would've become a long-term substitute teacher, which wasn't what she had wanted to do.

So, she agreed to lead the pod.

Mapping the logistics of your own schoolhouse

The families and Schacht had lengthy discussions about every aspect of the pod: safety, location, and curriculum.

Initially, Schacht thought she would design her own curriculum for the class, but that would be costly and timely, she explained.

The families' school district gave parents the option between hybrid and virtual classes. The group settled on enrolling in the virtual-only model, with Schacht serving for in-person support — thus creating their version of a hybrid learning model.

All seven students are in the same online, first-grade class. By staying enrolled in the school district, they'll have a smoother transition back to in-person classes next year.

Since Schacht isn't their primary teacher, she helps the children with their virtual classes and supplements where it's necessary. In between online lessons, Schacht leads her own activities.

"I've found time and space in our schedule to put my own spark in there and give them an activity that I think they would like," she said.

One example is a Halloween science lesson she designed. Schacht brought in a pumpkin so the students could make observations, use their senses to study the gourd, and engage in a hands-on activity — all impossible too do through a computer screen.

Safety, communication, and trust are the top priorities in the pod

Safety was the families' main motivator to start an education pod.

The families wanted a group of people they could trust, and communication is their top priority.

Schacht said the group has agreed to limit their exposure, and they decided to avoid all activities that aren't necessary.

The need to limit exposure and keep the classroom clean has created some unforeseen pressures of being a teacher, but Schacht said overall, it's gone smoothly.

"I feel a lot safer that we're all on the same page," she said. "I think in a [regular] classroom, there are a lot more variables that you don't have control of."

She sanitizes the classroom each morning and afternoon. Each student has their own set of supplies, and they wear masks throughout the day.

"I was nervous about how we would all work together, but the families have all been positive and super helpful with everything," she said.

Schacht told Insider that she makes the equivalent of a public school teacher salary.

The families set up a payroll account, so Schacht receives payments like a traditional paycheck, with taxes already taken out.

Schacht said her group realizes the privilege they have to offer their children this school model. Learning pods can cost anywhere from $200 to $700 per child, per week — something many US households couldn't afford.

Insider's Nadine Jolie Courtney reported that these pods could further the divide between high-income and low-income students. Other critics point to concerns about reducing the available resources for marginalized children.

Schacht said the parents recognized many of those concerns. Earlier in the year, they hosted a school supply drive. By staying enrolled in schools, the families also won't affect the district's funding.

"They feel very grateful and happy that they're able to have this situation and be able to do this for these kids," she said.

Initially, Schacht and the families had planned to rotate between homes. Every couple of weeks, the group would move to a new living room, basement, or kitchen for the children to learn.

But one of the families had an empty, unfinished shed in their backyard that would make for an ideal classroom, Schacht said.

The husband was a contractor, so he quickly transformed the skeleton of a building into a colorful classroom.

He added drywall, cabinets, and flooring to the building. The other families searched Facebook Marketplace and garage sales to find the desks, tables, and chairs that now fill the bright room.

The building wasn't finished in time for the start of fall classes, so the group learned in a basement for a few weeks.

Schacht said her students struggled to stay focused in the basement. It was hard to differentiate between a home environment and a learning environment, so Schacht said the students weren't as engaged.

When they moved into the schoolhouse, Schacht said she saw major improvements.

"I've definitely seen a change in their work ethic since working in the basement to coming to the schoolhouse," she said. "This creates the sense that this is school, this is our meeting place."

It's also given the students autonomy over their learning and learning environment.

Before the schoolhouse was complete, the kids were asked what they wanted this school year.

Schacht said they were eager to celebrate holidays, like Halloween and Thanksgiving. They insisted on listening to Christmas music in the winter, wanted pajama day, and wanted to hang their artwork around the room.

"It's just becoming our own little happy place," Schacht said.

Schacht said it's unlikely that the pod will continue after this school year. Likely, they'll all go back to their elementary school to start second grade, but for now, this style works for the group.

"Most kids would be dragging their feet, but they've really transitioned so well," she said. "They're just so happy to come here every day."

If you're a teacher, student, or parent who wants to share their story on what it's like to go back to school right now, get in touch at [email protected].