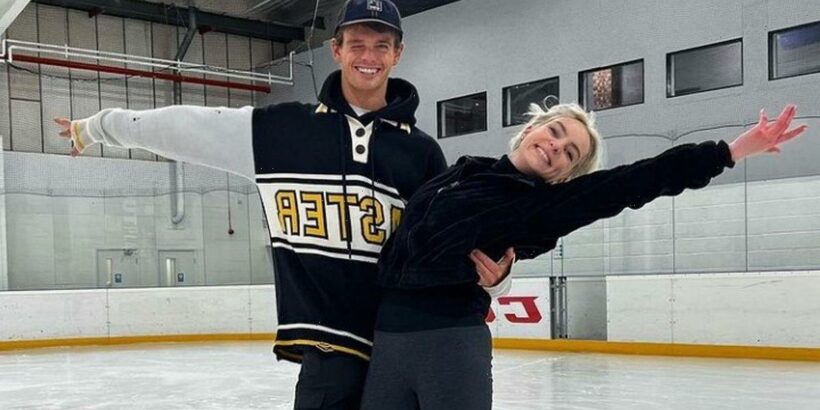 Regan Gascoigne has quickly become a firm fan favourite to take theDancing On Ice trophy this year thanks to his skilled footwork, faultless lifts and ease when on the ice.

But off of the ice, Regan has had a diverse career in showbiz and has worked as a dancer, singer and an actor.

And through it all, the 25 year old has been supported by his father, England football iconPaul ‘Gazza’ Gascoigne.

In fact,his proud dad was brought to tears after Regan topped the Dancing On Ice leaderboard.

However, their relationship hasn’t been plain sailing and the pair have experienced their fair share of ups and downs throughout the years.

Paul, 54, infamously battled with mental health issues as well as an addiction to alcohol and drugs and nearly died due to his health battle.

In 1998, Paul also separated from Regan’s mum, and in 2009 the dancer expressed his dismay for his father in a documentary.

“He’s probably going to die soon. I don’t want to waste all my tears on him. I feel bad and sorry for him but it’s not our fault,” he said.

But since then, the pair have rebuilt their relationship and the father and son have remained close over recent years.

Speaking to Heat magazine, the proud dad said: “I just make sure I’m there for him whenever he needs us, and luckily enough, he’s strong enough to look after himself now.”

A source added: “Regan and Paul are very close and have a great father/son relationship.”

In fact,speaking to The Sun, the duo revealed that they’d been able to bond over the fact that they both have obsessive compulsive disorder (OCD).

Paul said: “I’ve got OCD and he’s got it too. When I used to go and see him, if he wound us up I’d open all the cupboard doors to annoy him, because I knew he’d have to go round shutting them.”

He added: “When we get together we just feel like we’ve never been away from each other. Now we hang out as mates.

And when Regan came out as bisexual, he told Lorraine that his dad was proud of his ability to acknowledge his true self.

His footballer father said: “I still love you no matter what.”

For all the latest interviews with this year's Dancing on Ice stars, sign up to our daily OK! Newsletter. Dancing on Ice continues on Sunday evenings ITV.