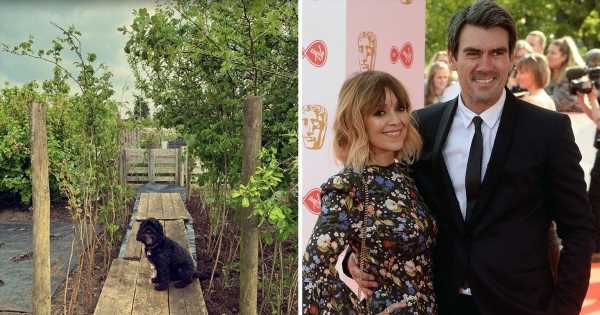 During lockdown, soap fans had the rare opportunity to have a nosey in the homes of their favourite on-screen characters as Zoom became the new norm, and one of the stars taking to the video platform was Emmerdale star Jeff Hordley.

Jeff, 51, who plays the infamous Cain Dingle in the ITV soap, has been a stalwart part of Emmerdale since his debut in the Yorkshire village in the year 2000.

And, on the show, he acts alongside his lovely wife Zoe Henry, 47, who plays Rhona Goskirk in Emmerdale.

The sweet pair, who own a gorgeous family home in the Yorkshire Dales, may work together but they actually met when they were back in college, before getting married in 2003. Adorable!

Zoe jumped into her role as Rhona in 2001 and 2002, before reprising her role in 2010. And the star doesn’t struggle with having hubby Jeff so close by, both at home and work.

“It’s important to have a laugh in-between takes so upsetting stories don’t get you down too much. Working on the same show as Jeff, who plays Cain Dingle, also helps because if one of us is having a bad day then the other will completely understand," Zoe told The Sun.

And it looks like home life is just as fun as set life for the couple, who while away their hours in a stunning countryside abode.

Taking a trip to this luxury home would see you feast your eyes on a huge garden abuzz with foliage, and a very well-kept allotment.

The star told The Sun’s Fabulous Magazine last year: "We have an allotment and it’s so therapeutic to have your hands in the earth.

"We’re mindful of what we eat, but watching our diet isn’t about being on TV, it’s more about general well-being, as Jeff has Crohn’s disease."

The pair, evidently keen to grow their own fresh produce, own an adorable pooch who looks like he laps up days exploring the vast garden.

Soap stars in the news

Zoe and Jeff also have two beautiful children named Violet, 14, and Stan, 10, and we’re sure the garden is the perfect play area for the pair.

A peruse of the couple’s home would also have you stumbling across a delightful minimalist room with log burner and plush green sofa.

During a recent Zoom interview on This Morning, fans found themselves impressed by the amazing room, equipped with modern scatter cushions and sliding doors.

The kitchen in the couple’s home is as vibrant as their kitchen garden, and boasts playful tiles and a blue oven.

And the jazzy blue oven isn’t the only colour pop in the home, with brightly coloured portraits of Henry VIII and Elizabeth I by artist Victoria Crossman sitting proudly on the walls, illuminated by red fairy lights.

The eclectic home oozes vibrancy and reflects the playful nature of both Jeff and Zoe.