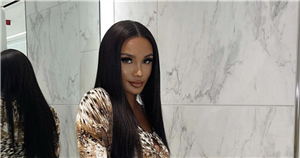 Former WAG Clarisse Juliette has been shaking things up, as one of the new bombshells to enter Casa Amor in ITV2's hit dating series, Love Island.

And it has been reported that the beauty has amassed an impressive net worth too.

Clarisse is a business owner, and is believed to already be a millionaire. Here’s a peek at her impressive net worth…

What is Clarisse Juliette’s net worth?

It’s unlikely Clarisse has entered the Casa Amor villa for money, with the stunning bombshell already rumoured to be a millionaire, according to Daily Star.

Chaleur sells all sorts of products, from stylish rings and necklaces to statement sunglasses.

As well as her successful jewellery business, Clarisse also boasts an impressive following on social media.

On Instagram, she already has a whopping 254,000 followers and she can be found posting about her business, as well as sharing snaps inside her very glamorous home.

The model was previously dating professional footballer Alex Iwobi, who has a whopping net worth of £7.4 million, earning £2,600,000 per year after signing with Everton F.C.

Clarisse is signed to Bold Management, and her Instagram following is sure to skyrocket following her appearance on hit show Love Island.

Clarisse is also no stranger to hitting the headlines as American rapper Swae Lee's then-girlfriend Marliesia Ortiz publicly accused her of having an affair with him in 2019.

Speaking of the half French and half Guyanese stunner, a source told The Sun: "Clarisse is almost like another Molly-Mae Hague in that she already has a huge following.

"First of all she's stunning. But she's really gained some fans on social media, mainly Instagram. She's also got a blog and a popular YouTube channel.

"But Clarisse isn't just looks. She's incredibly smart and has her own jewellery business," it was added.

Love Island continues tonight at 9pm on ITV2 and ITV Hub. Episodes are available the following morning on BritBox.

For all your Love Island news, sign up for OK! 's daily newsletter here.