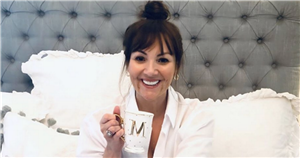 Martine McCutcheon has given a glimpse inside her stunning home.

The ex-EastEnders star, who recently opened up about her diet and exercise routine, gave fans a sneak peek into her lavish pad when she appeared on Channel 4's Celebrity Snoop Dogs in 2020.

The soap favourite took part in the programme, which enlists the help of the pets of celebrities to wander through their homes and give a tour through their eyes, thanks to the cameras attached to their bodies.

But away from the show, the 45 year old regularly shows off her enviable taste in interiors over on Instagram.

Inside her lush Surrey mansion, fans have been given a look at her all-white living room, an incredible recording studio filled with musical instruments, as well as a peek at the actress's bedroom she shares with her husband Jack McManus.

Get exclusive celebrity stories and fabulous photoshoots straight to your inbox with OK!'s daily newsletter.

Martine has also revealed that she has been updating her modern home which now has a chic white theme running throughout.

The fresh kitchen features an island with a Party sign, and Martine definitely got the memo as she poured herself a cocktail!

Sharing a post of the gorgeous dining room on Instagram, Martine wrote: "The Dining room is finally taking shape! More work to do but I love it! We haven’t been in this house long – And despite lockdown, we’ve had lots of requests to do work linked with the house! Typical!

"So! Ive been painting, fixing, scrubbing, measuring, and have generally been buried in cardboard boxes! I didn’t realise just how much stuff I had.

"We still have kitchens and bathrooms from 1984 but hey ho we are getting there and I love making things look beautiful – I’ve always felt a home should be a place to feel comfort and inspiration and it’s always lovely if you can get it to reflect who you are. We are getting there… slowly! Loads of love to you all!"

While on the Channel 4 programme, the dining room was lit with candles and decorated with fresh cream flowers in a huge vase, with a vintage gold framed mirror leaning against the wall.

Martine said she loved the "cosy feeling" of her home. Another fireplace was adorned with family photos, flowers and candles, giving just the vibe she's after.

Her two dogs, Freddie, named after her favourite performer Freddie Mercury, and Harry, after Prince Harry because of the colour of his coat, were filmed enjoying three plates of spaghetti and meatballs at the table.

Elsewhere the dogs roamed around her property taking viewers into her cosy living room, which boasts a white love seat and a rocking horse for her five year old son Rafferty.

There's also a beautifully decorated white fireplace with a large round black framed mirror hanging above it and Martine's NTA Awards for Best Actress she won in 1997 playing the iconic Tiffany Butcher in EastEnders before she was killed off.

That's not the only award Martine has collected, for she won a coveted Olivier Award in 2002 for her role as Eliza Doolitle in the theatre production of My Fair Lady.

It takes pride of place on a wooden set of drawers next to some more fresh flowers and some crystals.

Freddie and Harry are also allowed to wander up to Martine's bedroom which we've seen a peek of before on her Instagram.

She's posed on the plush super king bed which has a grey quilted frame in a recent post, where she was wearing her hair up in a messy bun and just a white shirt.

"Came back to bed for a cuppa! #naughtybutnice," she wrote in the caption.

She also recently set pulses racing when she snapped a gorgeous looking mirror selfie after doing her makeup in her bedroom.

On the TV show we got to see more of the all-white room, which featured designer handbags hanging on the wardrobe doors, pink ballet shoes tied round the door handle, and a decorative chandelier as the light feature.

Martine and Jack share their home with their adorable seven-year-old son Rafferty, who ensures there are no ghosts lurking in the house!

The youngster is clearly allowed to add his own touches to mum's interior design, balancing one of his toy cars on a stack of Fortnum & Mason wicker picnic hampers. Storage solutions have never looked so stylish!

Instead of a normal garage which holds a car collection, musician Martine has transformed it into a recording studio.

It's a room that proves perfect for the singer and her husband Jack, 37, who is a BRIT School-educated singer-songwriter. Jack, who has been marred to Martine since 2012, is the ideal man for a duet.

And equally extravagant is the sprawling gardens attached to the home, with an enormous space for Martine and her family to enjoy the sunny weather in.

There's another area that also has outdoor furniture set up to eat breakfast al fresco as well as plenty of grass for their two dogs to run around in.

Martine shared what she loved about her home on the television programme: "What I love about my home is there is just a real cosy feeling to it.

"I love interior design. I love things looking beautiful. And the Taurean in me, I’m a Taurus, the comfort and cosiness just seems to override all that in the end. I need to be comfy and I think the house has got a really relaxed atmosphere to it."

For all the latest celebrity news, sign up to our daily newsletter here.