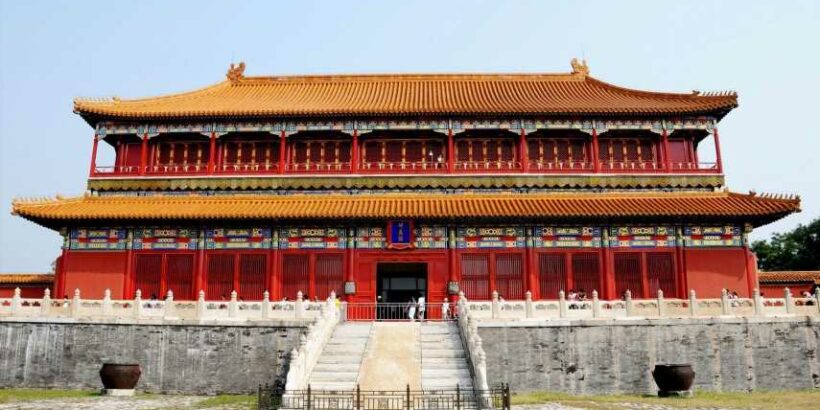 The Forbidden City is an everlasting structure. As China bulldozed its way through the 20th century as well as the 21st, becoming a worldwide superpower in the process, a significant portion of its history was obliterated. As Mao’s ideology of Communist China started to take root after World War II, the country went on a drastic modernization process, which resulted in millions of fatalities due to famine and a maniacal desire to destroy everything that had come before.

Unfortunately, hundreds of buildings were demolished to make space for modernization, despite the fact that China’s rich legacy was sometimes viewed as nothing more than a sideshow. Historical districts in Beijing were demolished and replaced with massive grey creatures. The Forbidden City, however, stayed unchanged for the past 600 years despite the country’s drastic transformation. Here is an amazing look inside the $70 billion Forbidden City in China.

An Unprecedented Tour Of The Forbidden City

The world’s largest palace complex is located smack dab in the middle of Beijing’s mayhem. With 980 buildings and 8,728 rooms, it is larger than Disneyland in California and priced at $70 billion, making it not just the world’s most valuable palace but also the most valuable piece of real estate. In 2019, the Forbidden City was visited by 19 million people from all over the world, yet for centuries a large portion of it was restricted to a privileged few, and even today, only sixty percent of the massive complex is accessible to the general public.

It was the residence of 24 different Chinese Emperors between 1420 and 1912, and UNESCO describes it as the biggest collection of surviving antique wooden structures. The Forbidden City is a large and astonishing structure in a rectangular shape spanning 961 meters (3,153 feet) by 753 meters (2,470 feet) and is surrounded by a 7.9-meter-high wall and a 6-meter-deep by 52-meter-wide moat. The Meridian Gate, the Gate of Divine Might, the West Glorious Gate, and the East Glorious Gate lead into the city. Approximately ninety percent of the rooftops in the Forbidden City are yellow, the color of the Emperor.

The two major exclusions are the Pavilion of Literary Sublimity, which has black tiles representing water and hence fire protection, and the residences of the Crown Prince, which have green tiles indicating wood and growth. Regarding roofs, there is a peculiarity here. The rooftops of the Forbidden City are designed to keep birds from settling on them and, no doubt, defecating on them. This was accomplished by making each roof’s pitch steeper and its spine wider than the distance between a bird’s claws. The tiles are also coated, which makes them slippery, making it nearly impossible for birds to land on the structure.

RELATED: The Billionaires’ Delight: How Dubai Became One Of The Richest Cities In The World

The Remarkable Construction Of The City

When Zhu Di became the Yongle Emperor and relocated the capital from Nanjing to Beijing in 1406, the building of the Forbidden City began. The construction work was a massive undertaking that reputedly required 14 years, 100,000 of the greatest craftsmen, and one million laborers to accomplish. The highly regarded Phoebe Zhennan wood was taken from the jungles of southwestern China (this wood is still worth approximately $10,000 per cubic meter, 35 cubic feet). Marble and other stones were sourced from quarries adjacent to the city.

The city was completed in 1420 and served as the capital of the Ming dynasty until 1644, when a peasant revolt led by Li Zicheng deposed the reigning emperor. In 1639, an epidemic spread over the region, exacerbating the discontent of the peasantry, which was the source of the insurrection. But there was yet another tremendous incident that really shook the Forbidden City to its roots. On May 30, 1626, a devastating explosion occurred at the Wanggongchang Armory, located approximately 3 kilometers (1.9 miles) southwest of the Forbidden City.

The Forbidden City, a construction marvel, was undergoing renovations at the time, with thousands of individuals working on the old wooden rooftops. At least 2,000 individuals perished as they were hurled off the city’s sloped roofs. All of this led to persistent unrest, and in 1644, a rebel army of 30,000 men ultimately captured the Forbidden City, but their reign was brief. After a year, the Ming dynasty retaliated, and Li Zicheng departed the Forbidden City after setting fire to several structures.

RELATED: The Story Of The Jeddah Tower: The To-Be Tallest Building In The World

In 1987, the Forbidden City was designated a UNESCO World Heritage Destination, and it is currently the most visited site in China. As previously indicated, not all of the building is available to the public, but the Chinese government has stated that after additional restoration work, as much as 80% will be accessible to the general public. The complex currently contains the Palace Museum, widely recognized as the world’s finest collection of Chinese relics. When the Japanese invaded China in 1933, much of the artwork was removed, and some of it ended up in Taiwan, adding to the issue.

At the time, the island was an integral component of the Chinese Republic, but obviously, times have changed, and Taiwan is now a sovereign nation — just don’t tell the Chinese. Some of these irreplaceable relics are currently on display in the National Palace Museum in Taipei, which is a huge hit with the Chinese. As mentioned at the very beginning of the article, the Forbidden House is a survivor. A magnificent location that just celebrated its 600th birthday and has survived insurrections, invasions, explosions, natural fires, and the Cultural Revolution’s horror. In the past few decades, few places have altered as drastically as China, particularly Beijing. But despite it all, the Forbidden City has stayed firm.

READ NEXT: These Are The 10 Most Expensive Purchases Of Elvis Presley