Even after hearing she’d won US$165,000 ($234,000) in the Windham-Campbell Prize for drama, playwright Patricia Cornelius worried maybe they had the wrong person.

The news came completely out of the blue, when she woke up to an email asking her to contact Michael Kelleher at Yale University.

Administered by the Beinecke Rare Book and Manuscript Library at the Ivy League institution, each year the prize asks for 60 nominations of writers across the globe from all genres. To this day Cornelius is not sure who put her name forward, beyond them being "somebody wonderful". 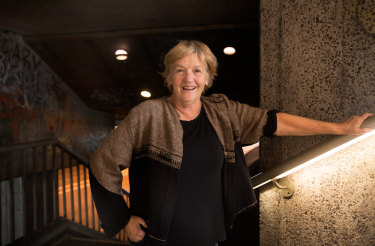 Patricia Cornelius is determined to address the issue of class and gender in her works.Credit:Simon Schluter

Her works include more than two dozen plays, which address issues such as class and gender. They are brave and confrontational – as their titles suggest in Slut and Do Not Go Gentle, which deals with death and dementia – as well as the collaborative drama Who's Afraid of the Working Class.

Two of her plays Shit and Love, directed by long-time collaborator Susie Dee, will be the first Australian works to be staged at the Venice Biennale in July. "We couldn’t believe that one either for a while."

A co-founder of the Melbourne Workers Theatre in 1987, confrontation is the essence of theatre, Cornelius says, and her aim is "to be quite seductive in the way you go there".

"[The award is] incredibly affirming for me because I’m not a mainstream writer and it works both ways, they don’t want me and I haven’t really wanted them," she says. "But you pay a price to be able to talk about your own country in the works in a really truthful and brutal way. A lot of people don’t want to hear that." 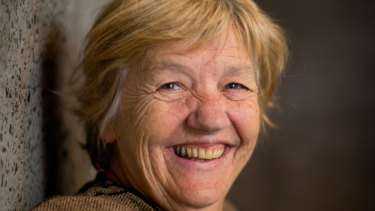 The prize money will allow Cornelius to live without financial pressures for a while.
Credit:Simon Schluter

Having written about gender issues since the 1970s, her work pre-dates the #MeToo movement by decades. "I feel that we’re back with a bit more physical clout now. There’s an anger, and rightfully so, that’s terrific."

"But the thing that also shits me to death is that we still don’t concern ourselves with class. We don’t see that the rich are f—ing rich and the poor are poorer and more miserable than ever. And what, that’s passe? That’s not got grit any more? Rubbish. That’s fabulous theatre to me."

But the thing that also shits me to death is that we still don’t concern ourselves with class. We don’t see that the rich are f—ing rich and the poor are poorer and more miserable than ever.

Cornelius chose to write plays by default and says she is "absolutely a failed actor".

Though sick of people talking about the cringe factor, Cornelius sees it in action in Australia. "We import work and I think it’s important to see work from across the globe, but you also have to tell your own stories. What the hell – as if we haven’t got them, miserable and exultant! We need to invest in them.”

For the moment though, the Windham Prize has invested in her, which means Cornelius has some time to write without any pressure around money.

"It’s fabulous. I don’t have anything highfalutin’ planned, except to live."