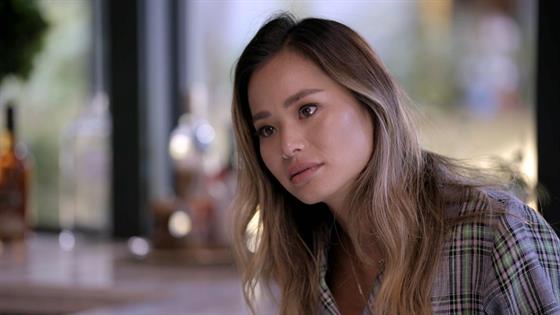 Tyler Henry foresees motherhood in Jamie Chung‘s future, no question. As for how and when, exactly?

Those facets of the actor’s future parenting journey might be a little bit more complicated, as the kindhearted clairvoyant explains in this clip from Thursday’s season finale of Hollywood Medium With Tyler Henry. Still though, he assures her even they won’t prevent her from eventually seeing this vision through, if she decides she wants to.

“I’ve been trying to kind of figure out whether to say this…but they’re bringing me to baby stuff,” Tyler tells her first. And right from the start, it’s obvious Jamie has been thinking quite a bit about “baby stuff” herself lately, too.

“It’s really hot in here,” she half-jokes, tugging on the collar of her blouse.

According to Tyler, one of the Gifted star’s “big purposes” in this lifetime will indisputably involve becoming a “mother figure” to a child at one point or another. That said, he does go on to warn her about some temporary roadblocks that might pop up along the way.

“We’re gonna go through some hurdles to get there is the way I would describe it,” he explains “It’s nothing to worry about, but if there are alternative forms of fertility that have to be done, or if it takes a little while, or if there’s something unique with a pregnancy…just be very conscientious in the event that [having children] is something you do.”

His client admits that the question of when to start having kids, or whether to have them at all, is on her mind pretty much 24/7.

See Tyler’s final words of advice—and Jamie’s takeaways from their conversation too—in the clip above!

Watch the season finale of Hollywood Medium With Tyler Henry Thursday at 8 p.m., only on E!