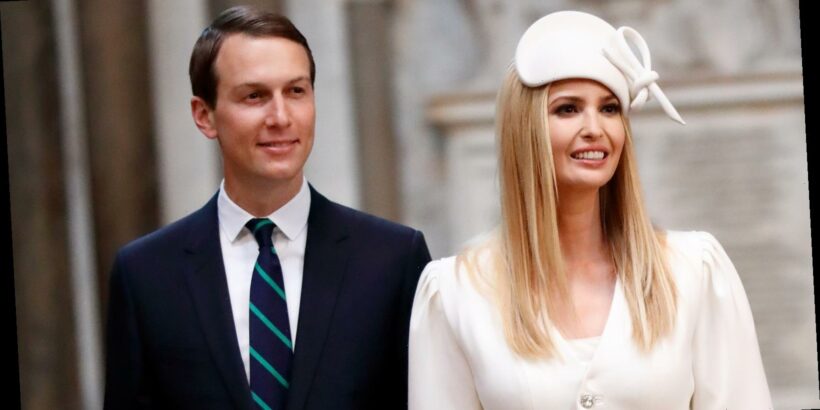 When you gotta go, you gotta go… even if you’re tasked with guarding the safety of a presidential family member. A report in The Washington Post reveals that for the last four years, the Secret Service detail assigned to protect Ivanka Trump and husband Jared Kushner has been renting a small studio near the couple’s home because it’s the one place they can conveniently use a bathroom. The studio — in a basement of a house in the Kushners’ super-posh DC neighborhood — rents for a gasp-inducing $3,000 a month, which essentially means the government has spent more than $100,000 on a toilet.

The Kushners have opted for Secret Service protection since the beginning of her father’s administration. (Per the agency’s website, a president’s immediate family members are entitled to the service, although they are not required to accept it.) The agents accompany them wherever they go and stand guard outside their home. As the Post story explains, in most cases the Secret Service’s clients live in estates with a separate space — say, a guest cottage or pool cabana — where the agents can take a break or use the facilities. Ivanka and Jared’s six-bedroom home has no such outbuilding.

Inside sources told the paper that the Kushners refused to let their protective detail use any of the six bathrooms inside their house, an accusation that both the White House and Secret Service deny. A spokesperson for the agency asserted, “Secret Service personnel do not request access to the facilities of private residences” to protect the residents’ privacy.

Secret Service agents once had to use a porta-potty

Anonymous law enforcement officials told the Post that Ivanka and Jared’s detail had to travel to former president Barack Obama’s Washington home or to Vice President Mike Pence’s house to answer the call of nature. When those were unavailable — the agents were barred from the Obamas’ place after leaving “an unpleasant mess”) — they resorted to using the toilets at local restaurants.

At one point, the agency arranged for a porta-potty to be placed on the sidewalk outside the Kushners’ house. A neighbor of theirs told Cosmopolitan at the time, “[W]e weren’t allowed to walk on the sidewalk. You just thought, ‘Are you really that important?’ And now they’ve just put a tacky Johnny on the Spot out on the sidewalk of our neighborhood. I guess it’s for the Secret Service. I’m like, ‘Ewww, really?'” Other neighbors raised such a stink over the eyesore that the idea went down the drain and the latrine was removed.

Faced with four years of this dilemma, the Secret Service finally approached the owner of a house across the street from Ivanka and Jared and asked about renting the basement space there. She happily agreed, and the First Daughter’s protectors have been doing their business there ever since. Once President Trump’s term in office officially ends on January 20, rumor has it that the Kushners will be moving to the Trump Doral estate property in Miami (via OK!). The federal government will still be footing the bill for bathroom service for a while, though; the lease on the basement studio won’t expire until September.