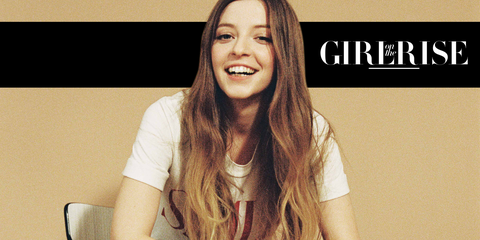 British singer-songwriter Jade Bird rocks out with projections of herself in the new video for her song, “Uh Huh.” The gritty, electric track shows a rougher, louder side to the guitar-wielding 20-year-old musician, and the accompanying visuals are just as vibrant as her sound.

Surprisingly, however, the inspiration behind the Kate Moross-directed video was not so much about color. “It’s more how to achieve a presence,” Bird explains to BAZAAR.com. “To put me in a three-sided box with a hundred Jades felt like the right thing to do, I guess.”

“Uh Huh,” which released earlier this month, is the latest of Bird’s three recent singles (including “Lottery,” a sweet pop tune, and “Furious,” a mellow ballad), and it’s her boldest song yet. “I’m little, I’m 5’3, but I always sound very fussy. And I really wanted to show this more fiery side,” she explains.

The “alternative banger,” as she calls it, is reminiscent of sounds from Alanis Morissette to Elle King; a departure from the folksy Americana of her breakout 2017 EP Something American, which earned praise from critics and put her on the map of music’s up-and-coming landscape. (Listen to the track “Cathedral” and you’ll understand the hype.)

Despite her EP’s title, Bird was raised in Hexham, U.K. She was raised mostly by her mother and grandmother before she moved down to London with her mom to pursue music. But her musical roots go back even further: she was gigging at pubs at 13 and 14 years old, she started writing songs and playing guitar at 12, and she learned piano at eight.

“I couldn’t imagine myself doing anything else,” she tells BAZAAR.com. “There’s a sense that you feel like you’re born to do something, and that’s why you work so hard to make it happen.”

Ahead, you can catch Bird on her U.S. tour, which runs through September. (She’s already sold out shows in LA and Austin.) She’s also working on a full-length debut album, which was hinted by her newest singles. “It’s the next phase of who I am,” she says.

Here, Bird tells BAZAAR.com more about her writing process and being influenced by female musicians.

Jade wrote “Uh Huh” and “Lottery” on the same day last year. She recorded them in upstate New York with producer Simon Phillips, who’s worked with Mick Jagger, The Who, Beck, and other rockstars.

I remember I wrote “Lottery” first, and I always describe it more about the air. Then “Uh Huh” came after because I wanted to write a more punchy, more gritty one. And that day was really the start of a new sound. It was quite symbolic in a way, I felt like was the step towards my album as I want it to sound. It’s representing all my influences, like Alanis Morissette, which I always cite as being a huge one, but I’m also super into this kind of new psychedelia, like Cherry Glazerr, Kurt Vile, Tame Impala. I really love that kind of rock-y, guitar-y edge to it.

She says her upcoming album (which includes a couple of piano-led songs), show three different shades of the spectrum of her life.

I’ve really been trying to explore those three facets of myself. You’ve got the classic ballads, the pop elements, and the alternative elements. I’m trying to pursue my own sound. That’s the one thing “Uh Huh” might just be, a little bit different than anything else right now.

There’s a noticeable evolution between Jade’s EP and her newest tracks. The sound is fuller and more mature.

I feel like it’s the one thing that keeps me up all night, how to evolve. I always feel like the one indicator of the classics is how they evolve. You can always reference Bowie for that. He’s someone that just constantly, every album, changed who he is, changed the music. It’s such a brave decision. That’s my main goal. I never want people to be like, “Oh, that’s another Something American, or that’s another ‘Cathedral.’” I want it to be new for them.

I think the importance comes from the importance of having strong females in my life, full stop. I was pretty much brought up by mom and grandma, who were both single parents. My mum was always listening to the diva of the time, you know, Avril Lavigne, Pink, etcetera. I think she just inspired this mentality that I am good enough than any other male, just quite a strong feminist sentiment.

I’m attracted to strong women doing their craft, be it in that amazing person, Kate Moross, who I work with, or Alanis Morissette, or Phoebe Bridgers. I’m attracted to that non-apologetic kind of “I’m going to do my thing because I just think it’s a very unique thing.” I want to inspire girls who don’t want to hide behind their guitars and write sad songs. You’ve kind of got to be out there, a bit more confident, a little bit. I’d love to inspire young girls to feel like that.

She wrote the “Something American” title track when the country was in a different place.

It’s so funny that I wrote the track before a lot of the stuff in America kind of kicked off. America is a very different country now from when I wrote that song. It just shows how songs can either last or not, how the times change. But, I wrote that about always wanting more, and always choosing the “grass is always greener” kind of thing. I felt the whole EP was based on that betrayal and love in general. It also felt appropriate, and there was a lot of Americana influence in that phase of my songwriting. I’ve moved on from that now. It just felt like the perfect title to kind of call that phase.

She wants to elicit emotions from her listeners.

In the moment when music could be assumed to be more disposable because there’s so much of it, I think if anybody feels anything really real in relation to your music or is moved by it, or it associates with a time in their life, it’s a win for you. It’s a success. It means you’re doing it for a reason.

This interview was edited and condensed for clarity.