Jaime King took to Twitter on Tuesday to share that she’d been arrested after participating in a peaceful protest in Los Angeles. “Writing in handcuffs in back of bus,” the 41-year-old actress tweeted. “EVERYONE WAS PEACEFUL—Jaime and the rest of my sisters on this bus. 77th precinct.”

King then detailed the experience.

“Currently still on the bus for over 4 hours,” she continued. “Took us from 77th precinct to San Pedro. Women w/ no access to vital meds, bathrooms, bleeding through their pants. They are laughing at us. #BlackLivesMattter.”

Earlier in the day, King was protesting outside of the home of Los Angeles mayor Eric Garcetti. She wore a shirt that read “I am a voter,” as well as a mask amid the global coronavirus pandemic. King was one of thousands of protesters to attend the rally and call for justice.

Floyd, a 46-year-old black Minnesota resident, died on May 25 after a white police officer, Derek Chauvin, pinned him to the ground by kneeling on his neck during an arrest. 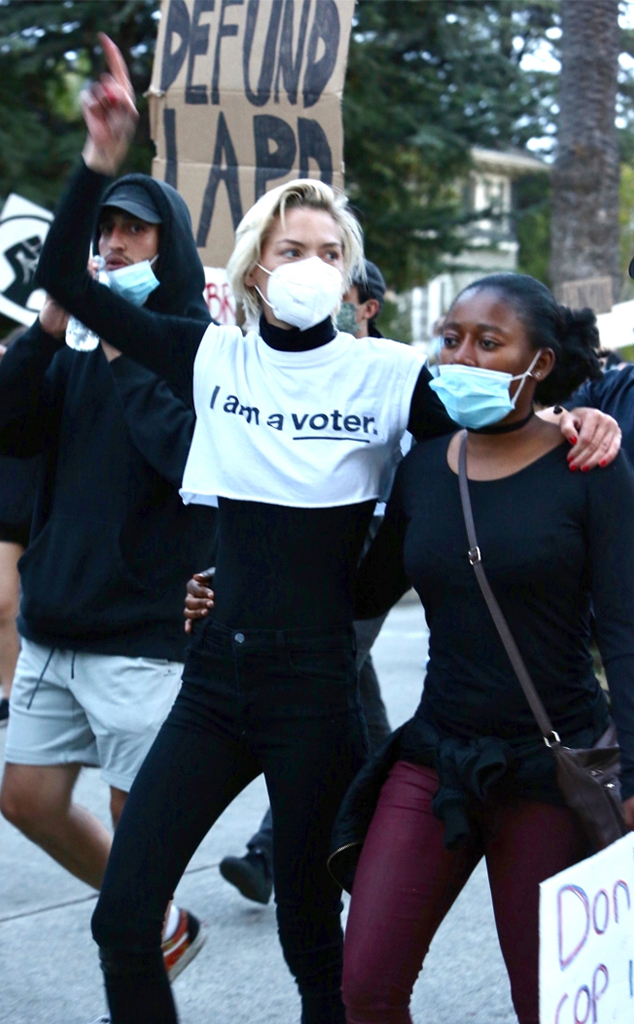 Chauvin was later fired from the Minneapolis Police Department and charged with third-degree murder and second-degree manslaughter. In an autopsy report, the Hennepin County Medical Examiner listed the manner of death as a homicide and the cause of death as “cardiopulmonary arrest complicating law enforcement subdual, restraint, and neck compression.”

According to NBC News, a memorial service for Floyd will be held at Minneapolis’ Trask Word and Worship Center at North Central University on Thursday. Al Sharpton is expected to deliver the eulogy. The news organization also reported that a second a memorial will be held in North Carolina on Saturday. In addition, NBC News reported that a viewing of Floyd’s body will be held at the Fountain of Grace Church in Houston on Monday followed by a funeral service on Tuesday.

“E! stands in solidarity with the black community against systemic racism and oppression experienced every day in America,” the network said in a statement on May 31. “We owe it to our black staff, talent, production partners and viewers to demand change and accountability. To be silent is to be complicit. #BlackLivesMatter.”