Unexpected item in the hand-bagging area. On an official visit to mark the 150th anniversary of Sainsbury’s, The Queen was fascinated by self-service checkouts in one of their pop-up shops. Her questioning was keen, focused.

She wanted to know if shoplifting was possible, if there was an opportunity to leave without paying for one’s digestives, could one slip a triangle of one’s favourite brie up the sleeve of one’s matching coat/dress combo and climb into the Daimler without anyone having, as you commoners say, clocked it?

‘And you can’t trick it? You can’t cheat then?’ she asked when a manager demonstrated how customers used a till. 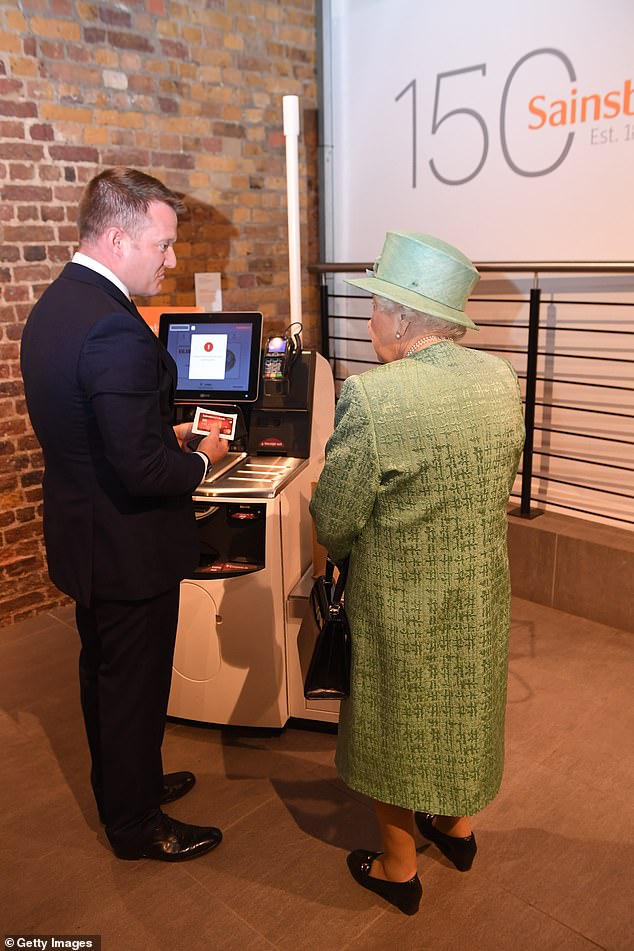 On an official visit to mark the 150th anniversary of Sainsbury’s, The Queen was fascinated by self-service checkouts in one of their pop-up shops, writes Jan Moir

You could, he told her, but the weighing scales should prevent certain items from being undetected.

It was a marvellous scene, a revealing glimpse of how the everyday experiences of ordinary citizens are a mystery to Her Maj; a woman who has never voted, never sat her driving test, never missed an Amazon delivery and never been stuck in a Bank Holiday jam.

She can have no idea of what gritty life is like for the rest of us; no notion of the annoyance of noisy neighbours, the enraging infrequency of council bin collections, the difference between builder’s tea and builder’s bum, and why firms who automatically renew our subscriptions after we have cancelled them make us weep in despair.

Sometimes I think it is no wonder she and Prince Philip have lived for so long and aged so well; they have never been held in a queue while ‘your call is important to us’, or been delayed at Didcot Parkway for a fortnight.

Here we are, fretting in the death throes of Theresa May’s reign, but what would happen if there was also a putsch at the Palace? And our dear Queen was booted on to the streets to fend for herself? Fear not, kind lady. Here is my Royal Guide To Modern Living to help you along . . .

More from Jan Moir for the Daily Mail…

Try the ones in different High Street supermarkets, Ma’am. They are not all weight-sensitive, wink wink knoworrimean?

HAVING A DINNER PARTY

Sooner or later you are going to have the family around for a dining event which you must cater for yourself. Ma’am, there are many difficulties ahead. It’s not like the old days, when chef prepared boiled peacock and everyone just got stuck in or starved. You must have a vegan option. You must check if your guests have allergies — and merely being averse to Princess Michael of Kent doesn’t count.

No cocktails in jam jars, please; no vaping indoors; no Instagram posting, no double dipping, no selfies and you have no idea of what I’m talking about, do you? Uh oh, here comes Meghan.

‘Are there eggs in this omelette?’ she will ask shrilly, while casting lustful glances at your tiara.

The whole thing is a nightmare.

GOING TO THE DOCTOR

This might come as a shock, Ma’am, but you have to wait in an area called a ‘waiting room’. A place in which the magazines will be out of date and the receptionist will be out of order.

BUYING A BRA IN M&S

With custom-built underpinnings no longer being supplied by your personal corsetiere, you will have to go to M&S for a BF (bra fitting) like the rest of us. Your Maj should proceed to the draughty plywood changing rooms and await a harassed assistant with a tape measure in her mouth. ‘Jumper off, lovey,’ she will say, before placing her cold hands around the royal ribcage.

Tips: Ma’am, ‘cup size’ does not refer to the magnitude of the racing trophy won at Ascot, so on no account ask: ‘Is the going firm?’ If the assistant asks; ‘Balcony or padded,’ she is not talking about your preferred seats at the Royal Variety Show.

Beware. Digital etiquette is fraught with pitfalls for the older texter. A snowflake can mean cocaine, applause hands can mean spanking and an aubergine is not always representative of a fondness for ratatouille. Ma’am, stick to smiley face and sad face.

Please repair with footwear to a branch of Timpson immediately, where you can also get a key cut and buy a small trophy, a padlock, a telescopic umbrella, rain hat, get something engraved and stock up on watch batteries. No, we don’t know why either. That smell Ma’am? It is glue. Some of your subjects use it for affixing purposes, while others . . . well, never mind. You wouldn’t believe it anyway.

Ma’am is perhaps used to servers only speaking when they are spoken to? And only then to murmur: ‘Shot at Balmoral, Ma’am.’ Meaning the roast venison, not Fergie’s hopes of royal forgiveness.

Beware that in restaurants, impertinent servers will introduce themselves by name, they will ask ‘have you dined with us before’ and they will introduce you to their ‘concept’ which will invariably involve the multi-ordering of small plates or ‘a nursery tea’ as you know it.

They will also regularly interrupt you by asking: ‘Is everything all right?’ yet they will be nowhere to be found when everything isn’t. When you ask for something, they will say: ‘that should be OK’ which means it won’t be.

The nation is gripped by decluttering and recycling fever. Our guru is a woman called Marie Kondo who appears to do very little except visit other peoples’ homes and fold jumpers, just like some of the younger royal ladies we could mention, Ma’am.

From now on, you must spend time giving your junk to charity shops then buying it back from car boot sales and eBay like millions of your citizens.

In other news, plastic was good but now it is bad, ditto Emma Thompson whom you dame-ed, for heaven’s sake.

The large oval receptacle in the middle of the bathroom? That is called ‘the bath,’ Ma’am. It might surprise you to learn it does not come pre-drawn, bubbling with lavender salts and filled to the correct depth and temperature.

In the same vein, toothbrushes are not pre-loaded with toothpaste and loo rolls do not fold into ‘points’ by themselves. In what might be the biggest shock of all, bathrooms do not always smell of fresh paint. Good luck in your new life. Inbox me with any problems!

Rihanna has lived in London for the past year, and no one has noticed.

She bought a house in St John’s Wood, she shops at Sainsbury’s (she’s got a bag for life, bless her) and she walks around all the time, while no one bats an eyelid.

‘I try to keep it a little incognito,’ she says.

It just goes to show if you really don’t want to be noticed, no one notices.

That’s the exact opposite of walking through an airport in a burka, Madonna. Just saying. 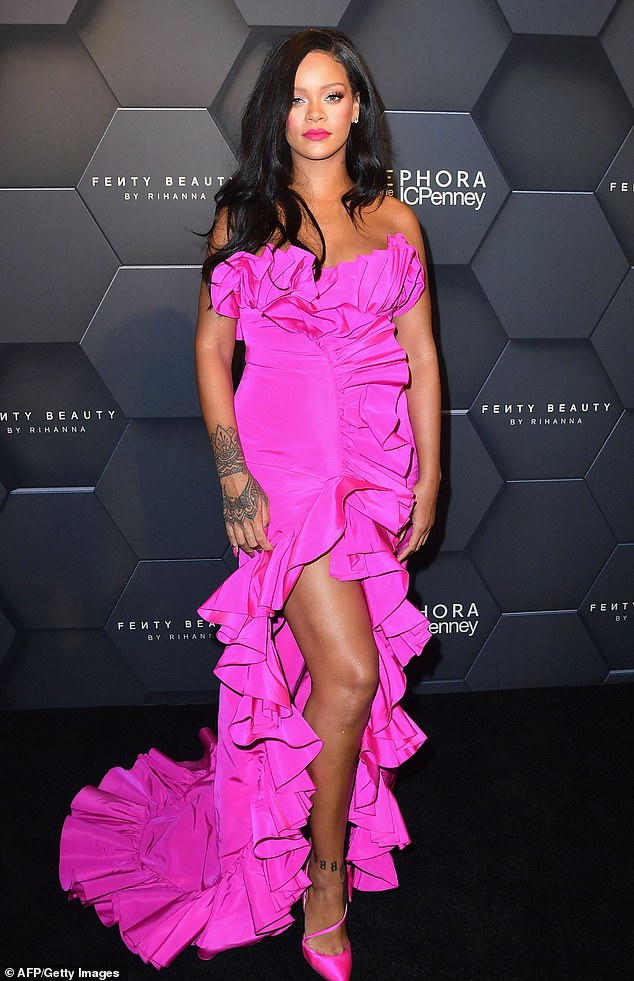 Rihanna has lived in London for the past year, and no one has noticed. She bought a house in St John’s Wood, she shops at Sainsbury’s (she’s got a bag for life, bless her) and she walks around all the time, while no one bats an eyelid, writes Jan Moir

Leadsom made it black and white…in turquoise

The political resignation letter is an art form of its own. Authors know it is probably going to be the most-read thing they will ever write, so the pressure is on to be statesmanlike yet endearing, an impossible task.

It purports to be for the Prime Minister, but it is really for the hearts and minds of the electorate — and a silent plea for history to bear witness to their greatness and noble sacrifice.

However, you don’t have to look too hard to see what lurks beneath the words; passion, tristesse, fury and thwart. Andrea Leadsom’s resignation letter was unexpected by No 10, therefore ragingly hostile. It was also loaded with passive aggression — but signed in girlish turquoise ink from a gel pen.

She had ‘great regret’ and ‘a heavy heart’ while noting ‘uncomfortable compromises’ and — ouch — a ‘complete breakdown of collective responsibility’. Now she is urging Mrs May to ‘make the right decisions’ and we all know what she means.

In 1990, Geoffrey Howe managed to be a little more civil in his resignation letter to Margaret Thatcher.

He was ‘deeply anxious that the mood you have struck’ and also ‘very sad’ about the ‘growing difference which has emerged between us on the increasingly important issue of Britain’s role in Europe’.

Sadly for the Conservatives, some things never change. And whatever your circumstances, if you feel yourself reaching for the turquoise pen to resign, please do it with good grace, or not at all.

Romance that was news to Natalie

Peter Crouch, married to model Abbey Clancy, was once asked what he would be if he had not become a football star. ‘A virgin,’ he replied.

Perhaps the same could be applied to chrome dome musician Moby, if he hadn’t become rich and famous?

In his new autobiography Then It Fell Apart he details a sexual liaison with actress Christina Ricci, pursuing pop star Lana Del Ray and dating 18-year-old Natalie Portman when he was 35. 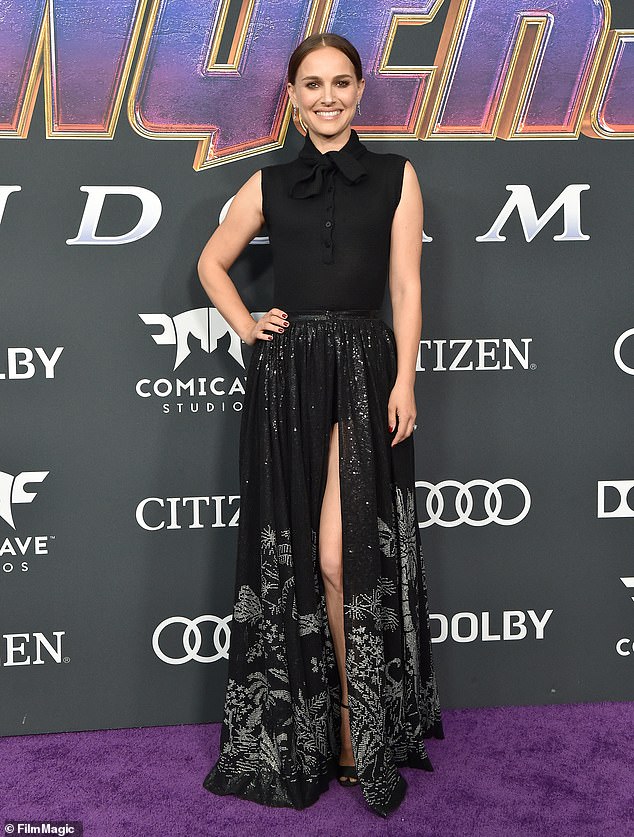 Football star Peter Crouch has written in his autobiography that he once dated 18-year-old Natalie Portman when he was 35. Portman was apparently unaware of their relationship

News to her! ‘My recollection is a much older man being creepy with me when I just had graduated high school,’ she said this week. They met at one of his shows and he said ‘let’s be friends’.

On subsequent dates they kissed. Only later did she ‘realise’ ‘this was an older man who was interested in me in a way that felt inappropriate’.

Neither of them come out of this well. When Moby was a star, Natalie was happy to be with him. Now she doesn’t want to be associated with him. ‘I don’t blame her,’ he said this week. ‘But it happened.’

In other news, Johnny Depp blames ex-wife Amber Heard for his severed finger. And they say true (celebrity) romance is dead!

Chernobyl is already being hailed as one of the most incredible television programmes ever made.

The five-part thriller launched on Sky Atlantic earlier this month.

We are only half way through, but the efforts by Russian officials in 1986 to hide the truth of what had happened at Chernobyl is appalling and plumbs the depths of human behaviour.

It makes me furious that officialdom and politicians here in the UK behaved no better — in some cases, even worse — in trying to hide the haemophiliac blood disaster.

What were they thinking? That it would save money and these lives didn’t matter? No right-thinking British citizens would have wanted to save a few quid off our taxes.

It is shaming to think millions of us are fractionally better off while the dead, the dying, the bereaved and their stricken families had to battle so hard for such little help.