Mr Pothole! JANE FRYER meets the local hero every town needs (though, needless to say, the council wants to STOP his one man crusade to fix the roads) 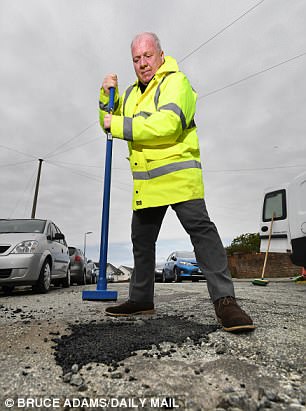 Roy Owen has achieved fame in Caernarfon, North Wales, for his one man campaign to fix potholes

The town of Caernarfon in North Wales has been having a bit of a rough time lately. The council is £16 million in debt, unemployment among the 9,615-strong population is depressingly high and the roads are in a dreadful condition — pitted, potted, bumpy, and among the worst in the nation.

Even so, there are reasons to be happy. There’s the exquisite coastline, topped off by Caernarfon Castle, a medieval extravaganza of crenellations and fortified walls. And the recent announcement that the streets will soon be brightened up by 300 hanging baskets.

But, what is most impressing locals are the exploits of Councillor Roy Owen. Known as ‘Mister Pothole’, he is being cheered from the top of the castle to the bottom of the lowest gutter for his one-man campaign to mend the town’s roads.

Roy, 60, is a giant bear of a man with vast freckly paws, enormous thighs and pink fleshy cheeks.

He is a great-grandfather, retired member of the RAF, former road worker, sign painter, youth football scout for several Premiership teams and, for the past 13 years, local councillor for the Seiont ward, in Caernarfon.

Most notably, he has single-handedly been solving the area’s pothole problem. And thank goodness. The roads are so pocked that motorists are forced to weave and wind as they drive — desperately trying to avoid the holes in the road which smash under-carriages and damage tyres.

Inevitably, the council seems to have failed in its duty. Apparently, policy dictates it won’t fill a hole until it’s at least four inches deep. Indeed, road resurfacing seems to be a thing of the past. 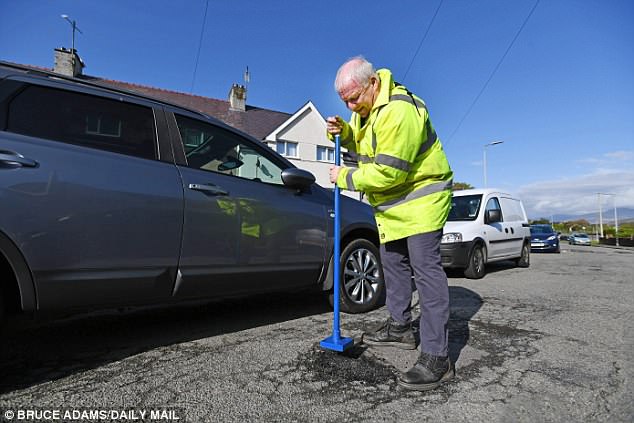 So, armed with a shovel, an ever-ready bag of asphalt, a blow torch and the commitment of a saint, Roy spends his spare time hand-filling hundreds of potholes.

‘I got sick of sitting in useless council meetings where people just drank coffee and did nothing about the complaints that were coming through in waves.

So now, he skips council meetings (‘Such a relief’) and does the work himself with such a happy glow it would warm the hardest health and safety-obsessed heart.

He is also, as I discover when I join him for a day’s potholing, extremely proud of his work.

‘That’s one of mine! And that one. And that!’ he cries, pointing to a series of smooth, grey blots on the wrecked roads as we bump about in his little white van.

‘I never forget one of the holes I’ve filled and can recognise my work anywhere,’ he says.

Suddenly, he looks at one section of the road. ‘THAT is not mine — look at it! Just look at the ridge. The edge! That’s council work and they’ve used far too much tar!’

Even to the untrained eye, the council-filled potholes are a mess. Great splattery cowpats of black tar, not compacted, not nearly as good as Roy’s. 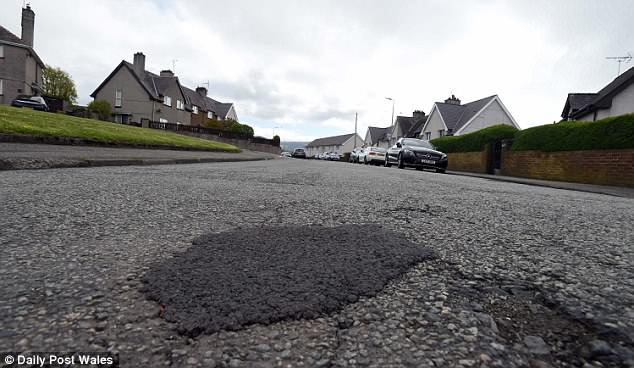 ‘That’s one of mine!’ Roy is extremely proud of his work, which he says is superior to the council’s 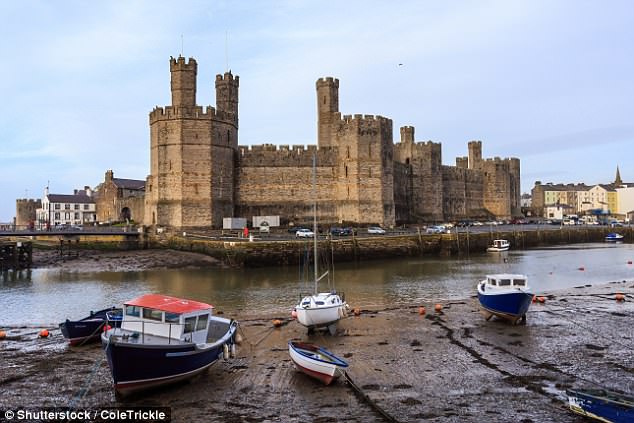 Despite the exquisite coastline, topped off by Caernarfon Castle, the council is £16 million in debt, unemployment among the 9,615-strong population is depressingly high

‘They aren’t properly trained like me, so the work doesn’t last,’ he says as he prods it in disgust with a broom. ‘If you do a job, you should do it properly!’

Roy has never been the sort just to dip a toe in.

He rises most days at 6am, works from 8am until six or seven in the evening and, even then, can often be found well into the night brushing, scraping, gluing, tarring, melting (with his hand-held blow torch) and bashing roads smooth with his compactor (a heavy mallet on a stick).

Needless to say, jobsworth council officials have ordered him to stop for health and safety reasons, stressing that road repairs should be carried out only by the highways authority.

But Roy, in an admirable spirit of defiance, is having none of it. ‘I’ve got my own liability insurance! I know what I’m doing. I’m fully trained. I’ve got a hi-viz jacket, cones and even a “roadworks ahead” sign, all paid for by me.’

It isn’t just potholes. While he’s out, he trims hedges, lops off low-hanging branches and litter-picks at least twice a week.

When the council’s grass-mowing budget was reduced last year, Roy bought a large petrol-mower and added grass verges to his to-do list. He fixed home-made dispensers to lampposts around his ward for people to collect their dog poo in, raised funds to install 44 security cameras to help reduce crime, and spread dozens of bags of salt across the icy roads throughout the winter. 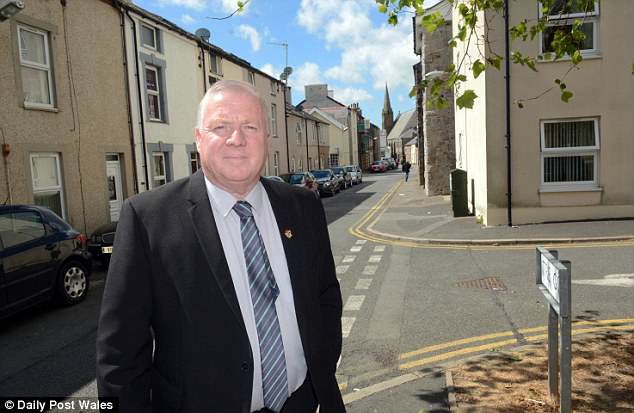 Roy has  been mayor, chairman of the local school, community councillor, town councillor and is now an independent member on the Plaid Cymru-led Gwynedd Council. 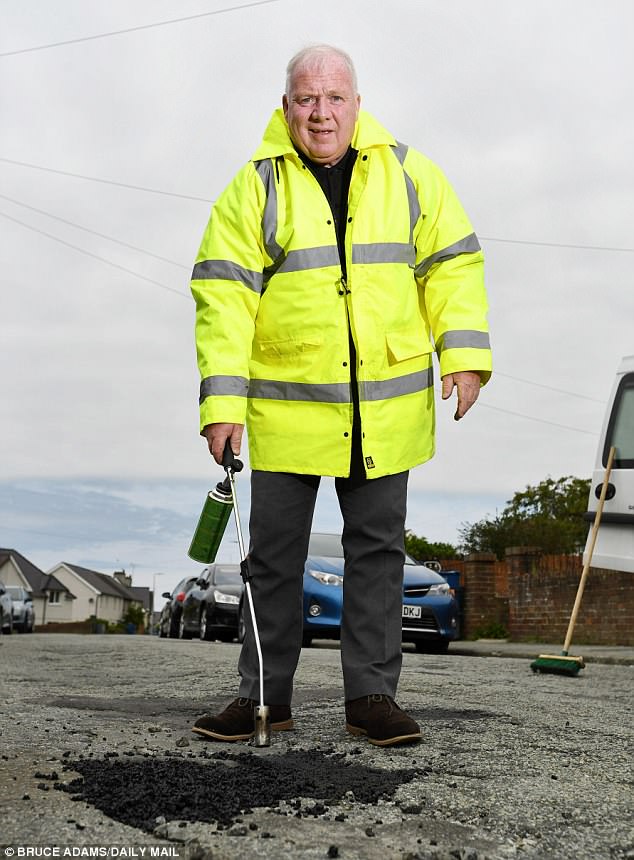 He can often be found well into the night brushing, scraping, gluing, tarring, melting and bashing roads smooth with his heavy mallet

When the local rubbish collections were reduced to once every three weeks and the blight of fly-tipping became unbearable, he started his own collections.

Now, he spends two full days a week collecting unwanted mattresses, furniture and bikes, (he was once given a hospital body bag but was relieved to discover it just contained rubbish) and lugging it all to recycling centres.

For many years, he’s also painstakingly tidied up after drug addicts — picking up and disposing of needles and other paraphernalia. On three tragic occasions, he came across the dead bodies of people who had overdosed.

‘People complain they pay their council tax but get little in exchange, so I try to add a bit of value — putting a smile on their faces,’ he explains.

For all his extraordinary drive, I can’t help wondering whether life as the patron saint of Caernarfon might sometimes be a bit much.

Particularly for Margaret, 70, his partner of more than three decades. ‘He never stops,’ she says.

‘He doesn’t know how to! It is in his nature to be busy — though I worry when he’s out late with his chainsaw.’ Margaret says their telephone never stops ringing. ‘Someone always wants something done and Roy volunteers to do it. I’m very proud of him, he’s a good man, if a bit frustrating at times . . .’

Fittingly for a local hero, Roy is Caernarfon born and bred.

As a boy, he dreamed of joining the police but didn’t do the entrance exam after his friends said it wasn’t cool.

Instead, aged 16, he joined the RAF. But after three years he returned home and started working for the local authority highways department. 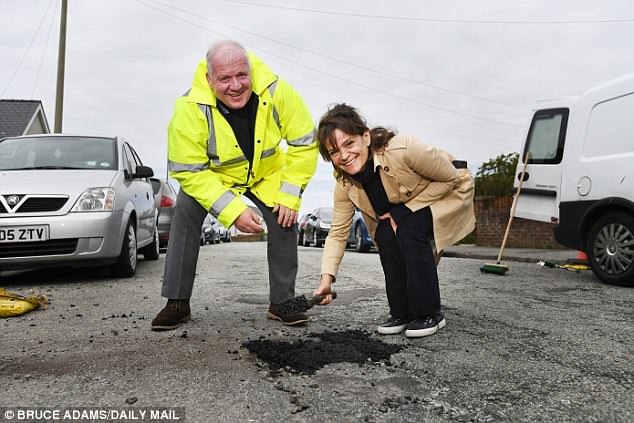 Jane Fryer with Mr Owen. Criticism that his work is a publicity stunt doesn’t stack up

‘My dad worked on the roads before me,’ he says, so road-mending was always in his blood.

When the lure of asphalt finally palled, he had a 15-year stint as a football talent scout, touring Wales youth matches.

Eventually, though, the travel was too much and he turned his attention back to his beloved home town. He has been involved in the local community ever since.

So far he’s been mayor, chairman of the local school, community councillor, town councillor and is now an independent member on the Plaid Cymru-led Gwynedd Council. He was instrumental in raising £11.5 million for a primary school recently built in his ward.

Not surprisingly, all this hard work has been rewarded at the ballot box. At the last local elections, he won more than 75 per cent of the vote. That was despite doing no canvassing — ‘I didn’t have time. I was busy working!’

Perhaps inevitably, there have been rumblings that his pothole heroism is a publicity stunt to keep him in his £13,600-a-year post as councillor. Having met him, such criticism doesn’t stack up.

He’s been doing it for years now and at considerable personal cost. He even swapped his much-loved Fiesta for a white van so he could keep all his kit with him. Needless to say, being the local patron saint of DIY has its repercussions. Whenever he and Margaret pop out, they are often cornered by someone with a list of jobs that need doing.

‘Once, a woman called me crying: “My husband’s beating me up. Can you come over here and sort him out?”’ Did he go? ‘Of course not! That was a job for the police,’ he says. It’s good to know he draws the line somewhere.

He is given bottles of wine as thank-yous — all of which he donates to local charity raffles. ‘It wouldn’t seem right to keep it’, he says. Just this week though, the local Travis Perkins builders’ yard offered to sponsor him and he was delighted to accept. ‘Tarmac, tools, anything I want, they’ve said they’ll pay for it,’ he beams.

Meanwhile, back on the bumpy streets he gives me chapter and verse on how to fill a pothole.

First, brush the pebble and dust out of the hole. Line it with glue. Let it dry. Shovel in the asphalt.

To Roy, it’s his civic duty. ‘It’s just a few potholes. Why all the fuss? Filling a hole in the road isn’t brain surgery,’ he says. Lucky Caernarfon. Every struggling town is in need of a Roy Owen.