Any time Janet Jackson is onstage is a treat, and such was the case on Sunday night. Janet Jackson’s 2018 Billboard Music Awards performance was accompanied by an inspiring speech while receiving the Billboard Icon Award in which she spoke out in support of women fighting against discrimination and abuse.

Jackson used her speech as an opportunity to echo the sentiments of the #MeToo movement. "I’m deeply humbled and grateful for this award. I believe that for all the challenges, for all our challenges, we live in a glorious moment in history," Jackson said following her performance as she accepted the award from Bruno Mars. "It’s a moment when at long last women have made it clear that we will no longer be controlled, manipulated, or abused. I stand with those women, and those men, equally outraged … who support us in heart and mind."

She also used the opportunity to talk about her faith, and how that helps her succeed amid the stresses of everyday life. "This is also a moment when our public discourse is loud and harsh," she continued. "My prayer is that … we turn back to the source of all calmness. That source, that source is God. Everything we lack, God has in abundance. Compassion, sensitivity, patience, and the boundless love."

All of this came after a performance that truly knocked the socks off everyone watching. Jackson took the stage in a sparkling gold ensemble, armed with a sprawling group of backup dancers, and the elaborate set lent itself to an extremely dynamic show. The lights, the crowd, and the dancers behind Jackson had her entirely in her element, and she looked as confident as ever. Stars like Chrissy Metz, Tyra Banks, Ciara, and Mila Kunis were seen dancing along in the audience.

Social media wasn’t blind to Jackson’s enduring talent, either, and plenty of fans took to Twitter to express their excitement for the singer.

According to Billboard, this was Jackson’s first televised performance in nine years. She was also at the ceremony to receive Billboard’s Icon Award, previously handed out to other huge names like Celine Dion, Cher, Stevie Wonder, and Prince. And, as Mars noted while he introduced her, Jackson is the first black woman to take home this award. At 52, Jackson’s performances are still as tight as ever, and she shows no signs of stopping, either — her most recent album, Unbreakable, came out in 2015, and according to another Billboard article, she’s got big plans for the future. 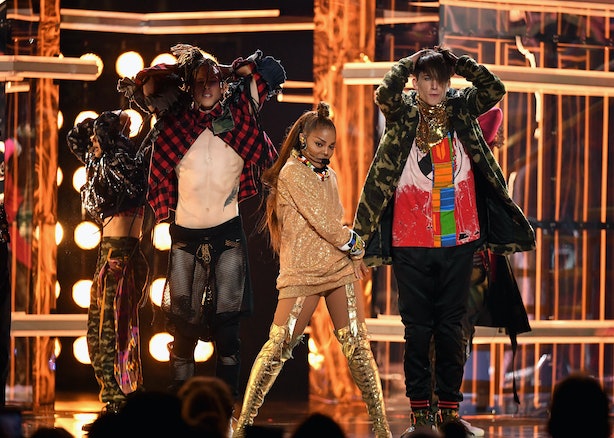 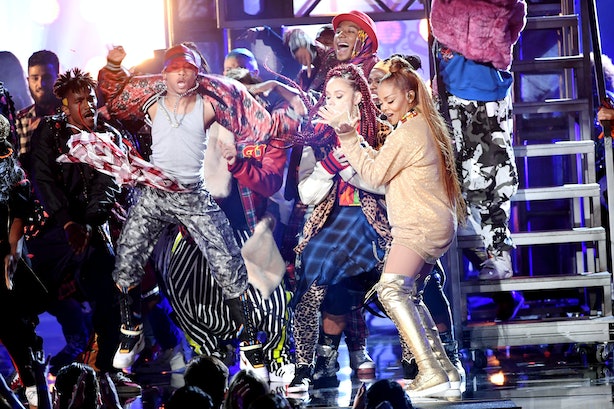 Jackson’s performance is a reminder that she seems to only get better at what she does with age, and the new mother’s knack for churning out bops is pretty much unparalleled. She’s killing it in every way possible, and that makes it incredibly fitting that Billboard chose tonight to honor her with the Icon Award.