JANET STREET-PORTER: Gwyneth is an overpriced sextoy-peddling nutcase but there’s one thing she’s got right; if you want to stay together, it’s best to live apart

Gwyneth Paltrow, the controversial poster girl for ‘vaginal steaming’, has been interviewed at length in the latest Wall Street Journal magazine about her lifestyle website Goop.

Posing in a selection of expensive swimsuits, at 46, she looks fantastic, a great advertisement for the brand.

According to Gwynnie, Goop is hugely successful – although the company does not disclose revenue or profits. We know she has raised over $50million from investors, and claims to personally road-test every product on offer. 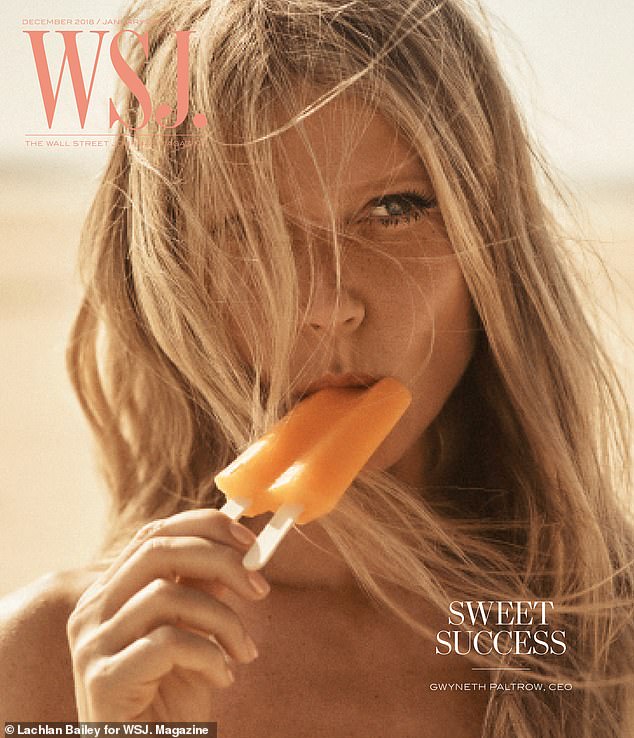 It must be very exhausting popping those rose quartz eggs up your front bottom and measuring if they have improved your sex life. By the way, don’t you wonder how their efficiency is measured?

Goop isn’t like any other website, it flogs a wonderful world where vitamins and supplement (at $90 a month) promise Goop devotees loads more energy and a better menopause.

On the surface, Gwyneth and I have nothing in common. I chucked all my supplements down the toilet, after a super-powerful probiotic totally disrupted my digestion.

I’m 71 and-three-quarters – and without the benefit of over priced Goop products I am fit, positive thinking, and perky. I don’t need a stone egg or a vaginal steamer to get through my busy day.

Nevertheless, the business is expanding, shops have opened in London, New York and Los Angeles and more are planned. Since 2014, Gwynnie has been dating Brad Falchuk, and they married last September. They are pictured on Tuesday in Hollywood

Gwyneth seeks world domination for her combination of mumbo jumbo pseudo-science, spiritual claptrap and focus on the ‘inner being’.

Thousands of fans seem ready and willing to believe her claims, even though the company recently had to pay hefty fines following a court case in which the benefits of three products (including the crystal yoni eggs – which Goop billed as an aid to sexual health) were judged to have been falsely promoted.

The interview with Gwyneth has caused outrage in some quarters, mainly because (as a result of her cripplingly large ego, which makes Madonna look positively chilled and normal) she couldn’t resist claiming all the credit for popularising yoga.

According to Paltrow, when a young woman at a yoga studio asked her recently if it was her first time, the lifestyle guru grumpily replied ‘you have this job because I’ve done yoga before’… and tells the interviewer ‘when I started doing yoga, people were like ‘what is yoga? She’s a witch. She’s a freak.’

On social media, critics have pointed out that ‘yoga was dreamt up by brown people thousands of years ago’, calling her remarks ‘Peak White Nonsense’.

Someone even posted a picture of the musician and composer Quincy Jones at a yoga class in Los Angeles in the 1970’s – observing that ‘a five year old Gwyneth was probably his instructor’.

For all her ludicrous claims, I’ll grudgingly admit Gwyneth wins my admiration in one department – relationships. 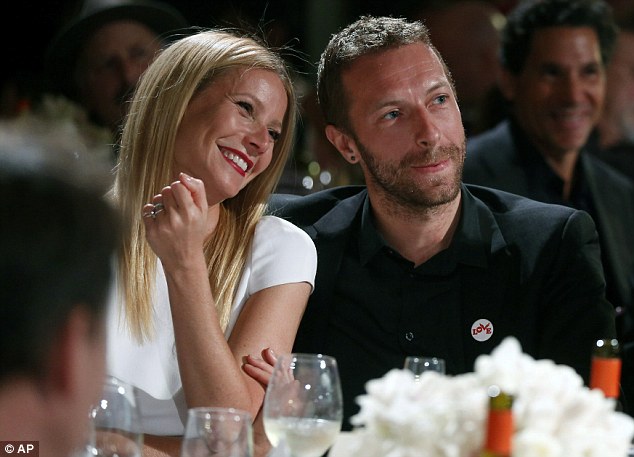 We mocked when Gwyneth told the world that her first marriage to Coldplay star Chris Martin (above, in 2014 in Beverly Hills) was ending, describing the process as ‘conscious uncoupling’

We mocked when she told the world that her first marriage to Coldplay star Chris Martin was ending, describing the process as ‘conscious uncoupling’.

Now, she says she was trying to come up with a way of describing remaining friends for the sake of the children.

In this respect she has been extraordinarily successful. She lives with her two children (Apple, 14, and Moses, 12) in Los Angeles and drives them to school every day, but their father collects them afterwards. They frequently go on family holidays and eat Sunday lunch together. When she has to go away on tour to promote Goop, Martin stays in her house, where he has his own room.

You can sneer, or you can say well done. This isn’t creepy or weird, but worthy of praise.

Since 2014, Gwynnie has been dating writer Brad Falchuk, and they finally married last September, after a huge number of expensive parties – one for the engagement last April, a star-studded hen do in Mexico and then a glamorous rehearsal dinner just before the wedding hosted by Jerry Seinfeld.

After all that, the couple took just two days off on honeymoon, and then went back to work. Gwyneth has revealed they don’t live together, because Falchuk has two teenage children and, according to Gwyneth ‘it’s pretty intense, the teenage thing. I’ve never been a stepmother before. I don’t know how to do it’.

Being a full-on couple but living apart is a recipe for success.

Gwyneth says she is better equipped to choose a life partner half way through her life – and she’s right. I know from personal experience (and four divorces) that you make a lot of mistakes through selfishness early on. I also had to manage two stepchildren, a nightmare.

Finally, after a relationship that lasted 18 years (no wedding), my partner and I split up, neither of us able to tolerate the other.

But now, I’ve found the perfect solution. I only see him at the weekends. He lives in his house and I live in mine. I don’t have to listen to his awful choice in music, deal with his whining dog, or eat at 9pm when I want to dine at 7.

When we meet on a Friday evening, there’s stuff to discuss, and a weekend of relaxation and cooking to plan.

And the very moment I start to get fed up of the dog, the background radio noise and the battle over the heating thermostat, he’s packed up his car and gone back to his man cave. Bliss!

Gwyneth is right – for a relationship to last, it’s best to ration your time together.