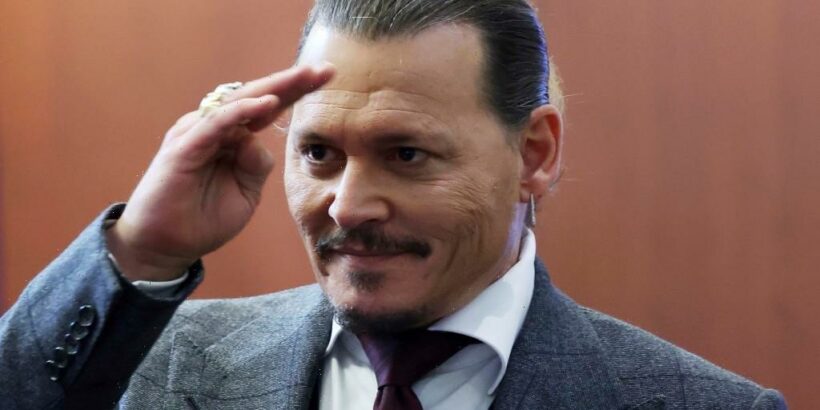 From his office window, attorney Jon Katz has a direct view of the Fairfax County Courthouse in Virginia, and for the past several weeks, he has watched fans gathering outside to catch a glimpse of Johnny Depp.

The trial pitting the “Pirates of the Caribbean” star against his ex-wife, Amber Heard, is the biggest case Katz can recall in 20 years of practicing criminal defense in the area. He also does free-speech work — clients have included strip clubs, adult toy shops and the Westboro Baptist Church — so he has a professional stake in the outcome.

“I want a verdict against both of them,” he says.

Depp and Heard are suing each other for defamation. Depp alleges that Heard destroyed his career when she accused him of domestic violence. She is countersuing over his claim that her allegations are a hoax.

The trial has become a digital media spectacle. At one point during Heard’s May 4 testimony, 587,285 people were watching the Law & Crime livestream. The video coverage has been a boon to the field of amateur forensics, as clips parsing Heard and Depp’s testimonies have been remixed as TikToks and Reels.

But the case is not that interesting to First Amendment scholars. It is unlikely to set any precedents or become a landmark in the history of defamation law, say several experts.

“It seems like a pretty basic libel claim,” says UCLA law professor Eugene Volokh. “It’s all about the facts. I haven’t seen anything that would actually affect the law.”

Heard published an op-ed in The Washington Post in 2018 in which she alluded to domestic abuse allegations she had leveled against Depp during their divorce two years earlier. She did not name Depp or restate any of the allegations. But she did align her experience with the #MeToo movement.

Depp’s lawsuit was allowed to proceed on the doctrine of defamation by implication, which holds that seemingly neutral and accurate statements can still make a defamatory insinuation. Heard’s claim that she “felt the full force of our culture’s wrath for women who speak out” was taken to imply that Depp had in fact abused her, though she did not quite say that.

Defamation by implication dates back at least to novelist James Fenimore Cooper, who — tracing a downward arc from literary celebrity to litigious crank — sued a series of newspaper editors in the 1840s. One responded that he would have to bring his suit to trial somewhere.

“He will not like to bring it in New York, for we are known here, nor in Otsego for he is known there,” wrote the editor, Horace Greeley.

The remark was taken to imply that Cooper’s bad reputation in his hometown was deserved — and that was held by a New York court to be defamation by implication.

In 2019, the Virginia Press Assn. asked permission to file a brief in the Depp-Heard case, warning the court against expanding the doctrine.

“Broad applications of the defamation by implication doctrine can chill the free press as it would require publishers to consider every potential defamatory implication that could possibly extend from otherwise accurate statements,” wrote Jennifer Nelson, the VPA’s attorney, adding that the risks could be particularly acute with celebrity plaintiffs.

Whatever the jury decides, the case does not worry Jack Browning, an attorney at Davis Wright Tremaine LLP who represents media clients including the New York Post and “Last Week Tonight With John Oliver.” He sees the Depp-Heard case as sui generis, and without a lot of bigger lessons.

“Will this case be broadly applicable to clients in the media?” he says. “It’s not obvious that it will.”

The trial has touched on the #MeToo movement, intimate partner violence and the decadence of celebrity. At bottom, it amounts to a couple re-litigating their divorce in public.

“This lawsuit was brought for Johnny to win the court of public opinion,” says entertainment lawyer Mitra Ahouraian, who has watched every minute of the proceedings. “He’s using the courts as a platform to have his side heard.”

But will it work?

“Neither side is going to win,” she says.