Labor has vowed to crack down on providers overcharging for services claimed on the National Disability Insurance Scheme as well as clear the backlog of thousands of legal appeals for funding, while delivering COVID-19 booster shots to people with disability.

NDIS Minister Bill Shorten said he is disturbed by the “twin-pricing system” for services to people with disabilities and says restoring trust between scheme participants and the senior bureaucrats is vital. 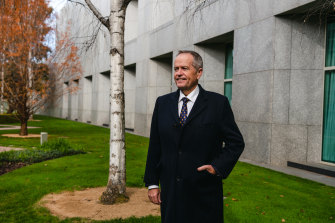 The National Disability Insurance Agency has come under fire for cutting the funding packages for disabled people as it faces rapidly rising costs to the budget.

In an exclusive interview, Shorten said it was an obscenity that there were some 5000 appeals of NDIS packages before the Administrative Appeals Tribunal.

“Maybe some of the cases are justified but I’ve got to just blitz that waiting list, got to bomb it, we’ve got to make sure that it’s reduced,” Shorten said.

“Under the last regime, we’re spending more money on the process of fighting people for amounts which are less than the amount we’re spending in the fight. How did we end up in that parallel universe?” 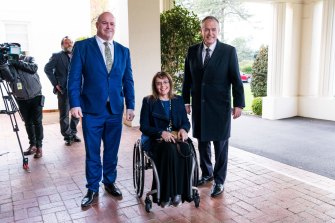 The number of appeals to NDIA decisions that make it to the tribunal has more than doubled over the past year and legal costs are running at tens of millions of dollars.

Shorten invited NDIS participant Cheryl Crilly and her husband Jose as his guests to the ministerial swearing-in ceremony on Wednesday, saying they had been “seriously mucked around” by the agency and having them there reminded him of the task ahead.

The NDIS will cost almost $36 billion in 2022-23 and is forecast to keep increasing. The Parliamentary Budget Office said last year if the number of people in the scheme continued to grow as expected, by 2032 it will cost between $59 billion and $75 billion a year.

Shorten acknowledges the need to tackle the pricing of services charged to NDIS packages too, saying it seems to be a “black box” where providers come up with fees but “you don’t know the magic of how they’re coming to it”.

“I’m disturbed at the twin-rate system or the dual system where if you don’t have a package, you pay X dollars, if you do have an NDIS package, you get charged X plus $100. The scheme can’t cross-subsidise everyone else,” he said.

Making sure people with disabilities – both NDIS participants and those on disability support pensions – have quick access to their third and fourth COVID boosters is also a top priority for the new minister.

He notes the pandemic is not over yet – more than 2100 scheme participants and more than 3000 disability workers have COVID-19 right now – and a bad flu season is upon us. Yet, the vaccination rollout was too slow and initially “people with disability just were forgotten”, putting them on a lagging timetable for boosters.

Shorten’s longer-term goals are to work with the states to improve support in schools, community mental health services, housing and bed block in hospitals as a way of tamping down NDIS costs.

But he said he was wary of any approach to the rising NDIS costs that suggested people with disability were the problem.

“I think there’s been a level of incompetence and wastage. I think there’s a breakdown in trust. I do wonder at what the level of fraud is. There are also systemic factors,” he said.

“I think trust is broken between the senior echelons of the agency and people with disability. At this moment right now in Australia, or at least prior to the federal election, there are two types of participants on the scheme: ones who’ve had their funding cut, and ones who are worried about having their funding cut.”

He wants state governments to come on board with more funding for education and community mental health services.

If those supports aren’t available, it leaves the NDIS as the only place to turn for people needing help.

“If the NDIS is the only lifeboat in the ocean, that’s what people will swim to,” Shorten said.

“But of course … the lifeboat can’t take everyone, there should be other boats, you know, other supports out there.”