Justin Bieber and Hailey Baldwin don’t kiss and tell. Or do they?

Bieber posted a black-and-white Instagram photo on Saturday of the two of them locking lips and looking all too lovey-dovey. “Hunny buns punkin,” he captioned it.

Is this his secret pet name for Baldwin?

In the photo, he also showed off his new shaved head look after cutting off his golden locks right before Halloween.

The “Sorry” singer and the 21-year-old model have never shied away from their public displays of affection. In September, the two of them were spotted kissing in London during London Fashion Week. “They couldn’t keep their hands off each other and spent more time being affectionate than they did shopping,” an eyewitness told E! News at the time. 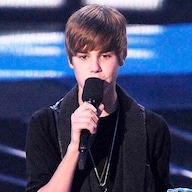 A History of Justin Bieber’s Hair Changes: The Dreads, the Dye Jobs and the Mustache

On Oct. 14, the couple enjoyed a lunch date with Baldwin’s father, Stephen Baldwin, in Toluca Lake, Calif. as Bieber was getting to spend more time with his future father-in-law.

Bieber and Baldwin got engaged in July after a whirlwind romance and have since sparked some marriage speculation in September when they were seen inside a New York City courthouse. Baldwin assured followers on Twitter that she was not married, although she did trademark her future name, Hailey Baldwin, for a clothing line.

Alec Baldwin, Hailey’s uncle, made a brief comment about the nuptials during an interview with Access Hollywood at the Emmys. “They just went off and got married. They went ahead and did it without listening to anyone,” he said.