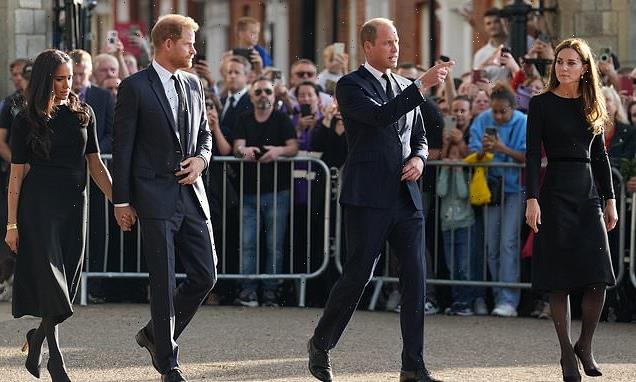 How the feuding couples came together at Windsor: Kate and William keep their distance from Prince Harry and Meghan during walkabout – while Princess of Wales and Duchess appeared to avoid eye contact

Prince William and Kate Middleton appeared to keep their distance from Prince Harry and Meghan Markle this afternoon as they made their first joint appearance together since 2020.

The Prince and Princess of Wales, 40, took to Windsor to inspect the sea of floral tributes laid outside the gates of the Berkshire estate in tribute to the late Queen, who died in Balmoral on Thursday, aged 96.

During the engagement, they were joined by Prince Harry, 37, and Meghan Markle, 41, marking the first time that the two couples have all appeared in public since Commonwealth Day on March 9, 2020, just weeks before the Covid lockdown.

The royals, once dubbed the ‘fab four’, were greeted by applause as they walked along the gates of Windsor Castle together.

However, all did not appear to be completely well among the feuding couples, who at times appeared uneasy in each other’s company.

As they walked along the gates of Windsor Castle together, temporarily putting aside the differences sparked by the Sussexes’ departure, they appeared to maintain a significant distance from each other.

The couples only came together briefly at the start and end of the engagement, when they appeared to enter and exit the same vehicle with one another.

Throughout the rest of the walkabout, which is believed to have lasted some 30 minutes, Prince William and Kate, and Meghan and Harry, appeared to stick to their two couples – perhaps instructed to by their aides – and barely interacted during the sombre occasion. 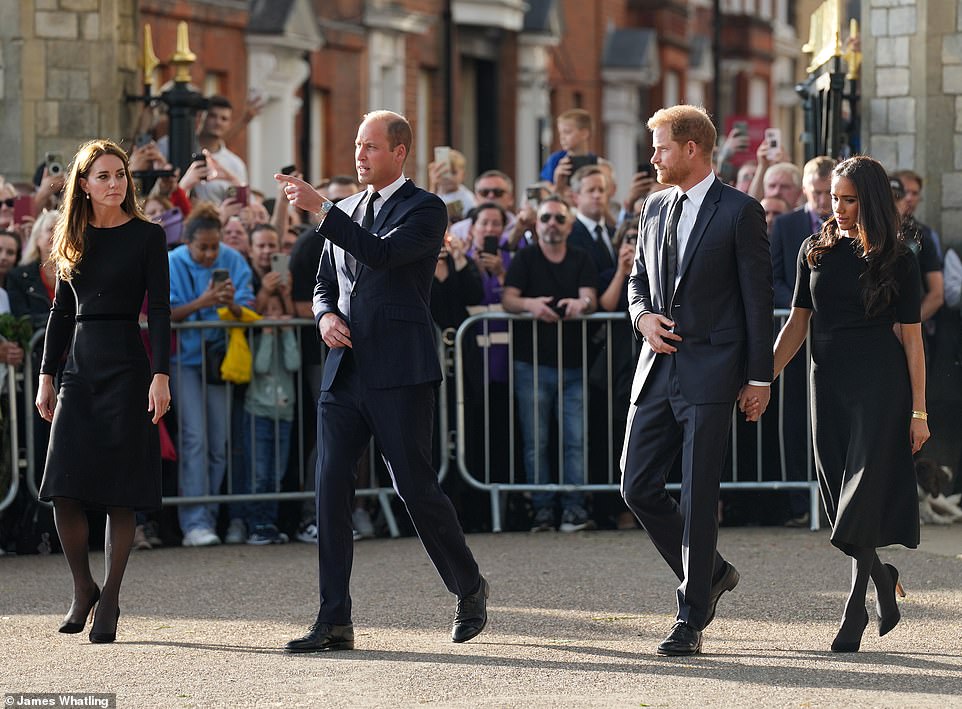 The two couples, who have not been seen together in an official capacity since March 2020, appeared to maintain their distance from each other (pictured L-R: the Princess and Prince of Wales, and the Duke and Duchess of Sussex) 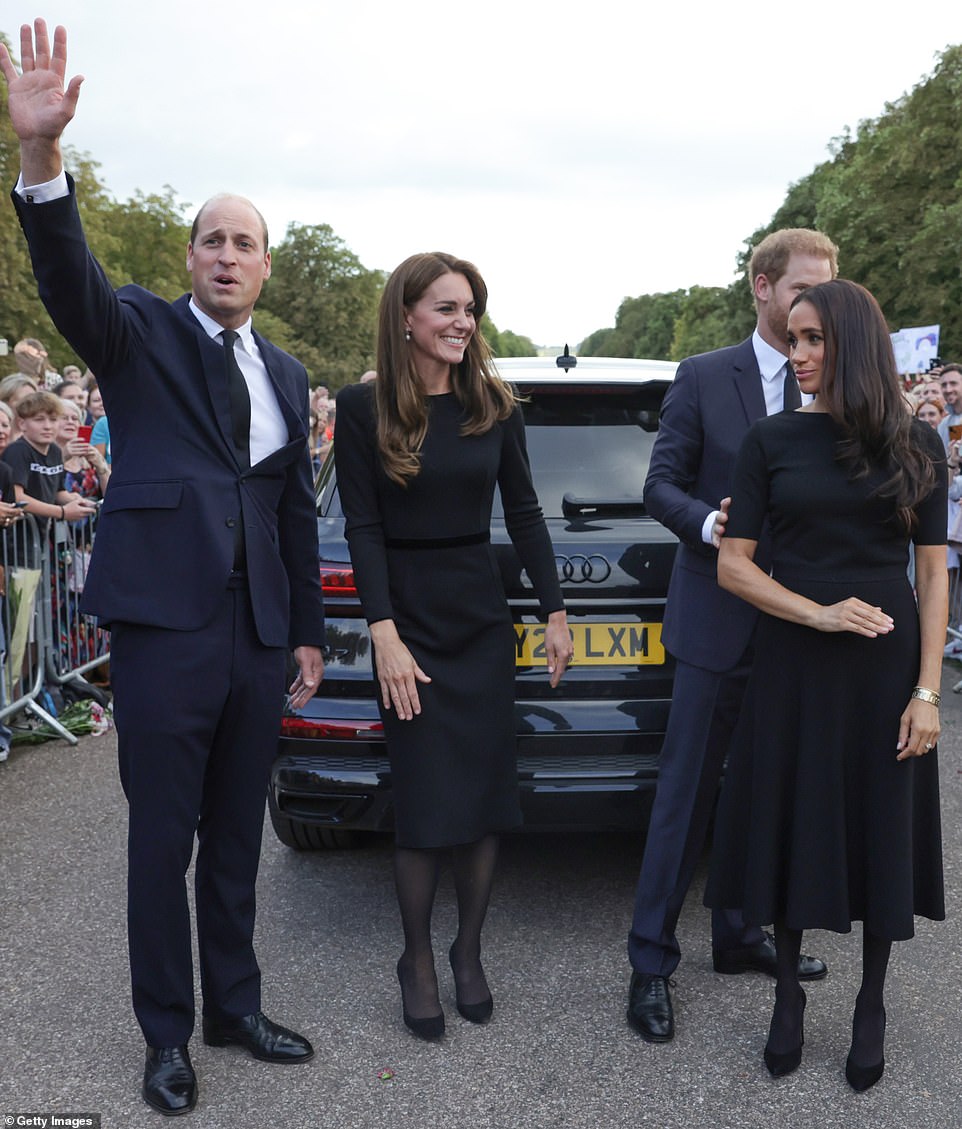 After speaking to the crowds, the couples made their way to their separate vehicles. At one point, the two Duchesses appeared to be avoiding making eye contact (pictured) 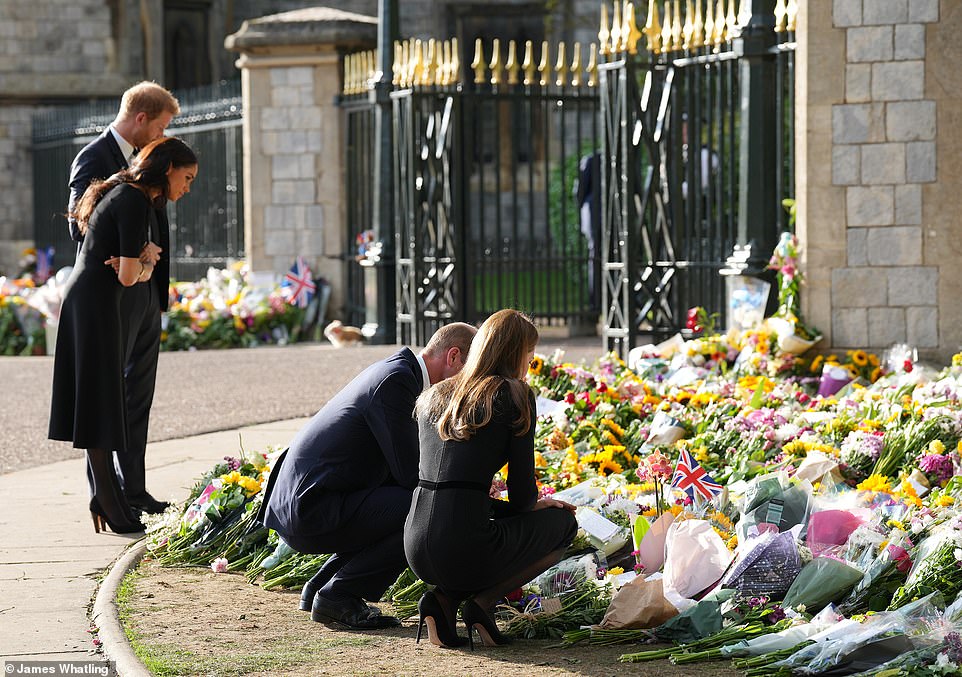 During the walkabout today, the royals inspected the sea of floral tributes laid outside the gates of the Berkshire estate in tribute to the late Queen

As the four emerged from their vehicle, the couple did not appear to interact with each other.

While Kate and William spoke to an unidentified man, thought to be an aide, Harry stepped back towards Meghan, and the pair listened while locked in an embrace, with the Duke’s arm around his wife’s waist.

As they started walking, with the two men standing next to each other, while their respective wives flanked them on the outside, William and Harry appeared to engage in a brief chat, as Kate and Meghan looked straight ahead. 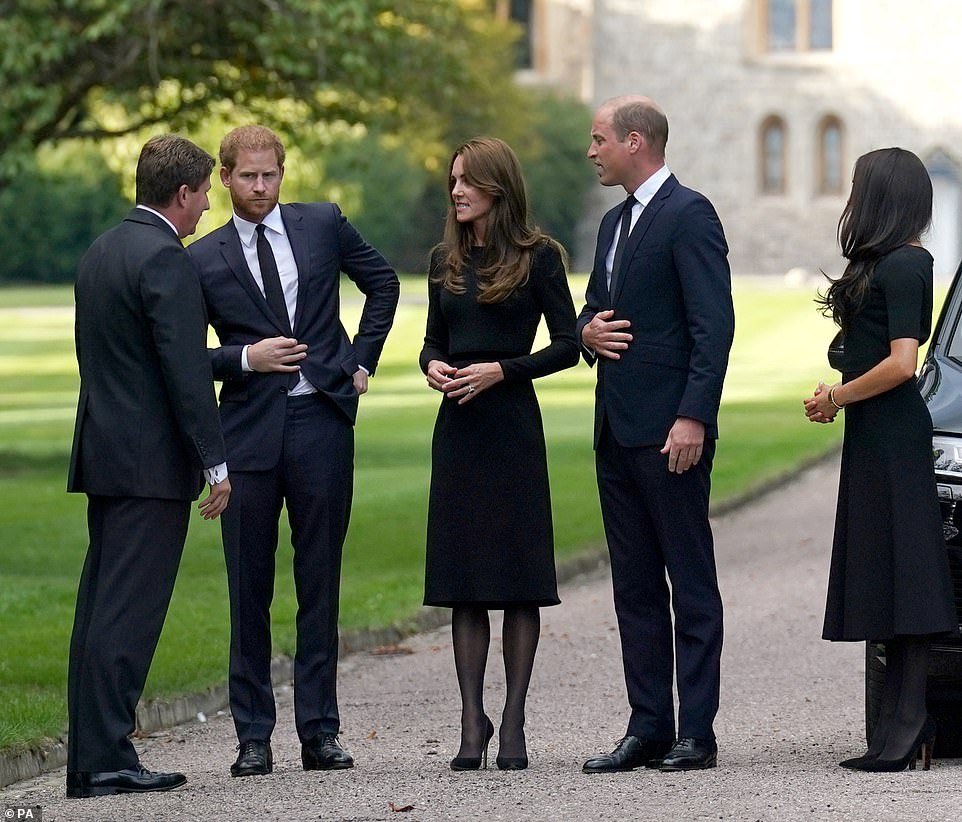 Before setting off on the walkabout, the couples spoke to an unidentified man (far left), with William and Kate appearing to do most of the talking, as Meghan hung back 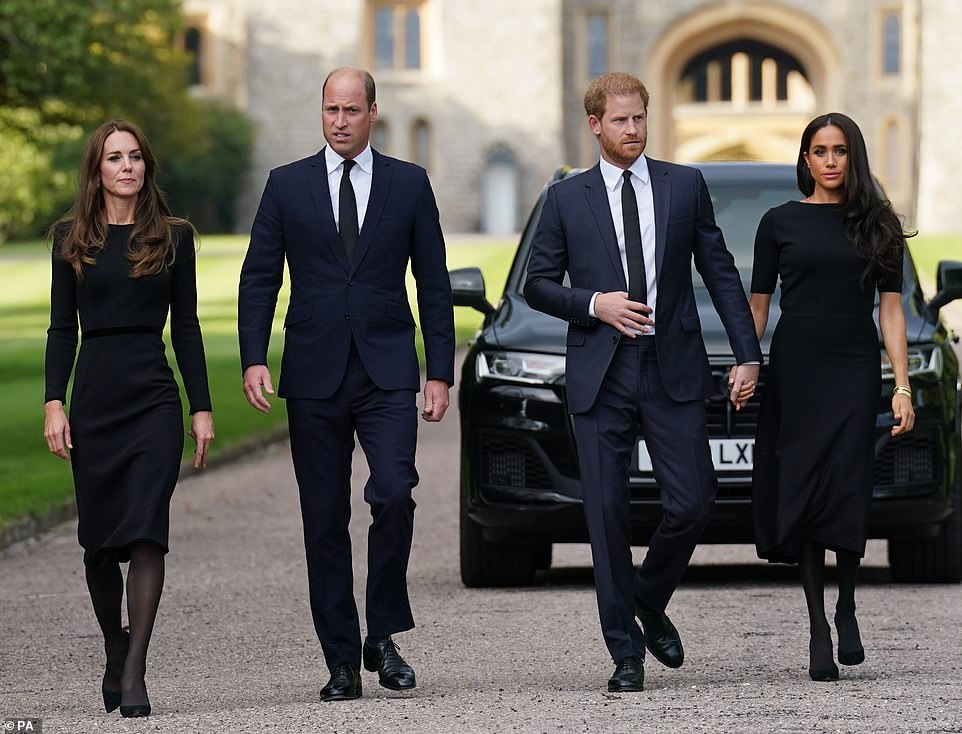 As they emerged from their vehicle, the two couples did not appear to be engaging with each other, and looked straight ahead 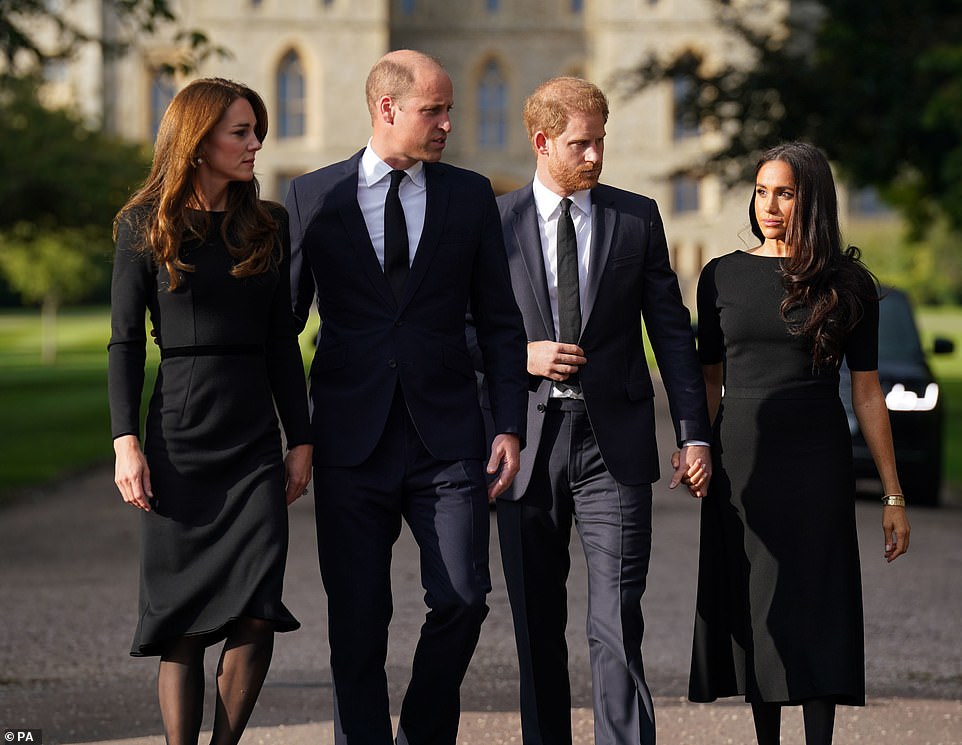 While making their way towards the floral tributes, Kate and William mainly walked separately, occasionally reaching out and touching. Meanwhile, Harry and Meghan maintained contact most of the time, often holding hands 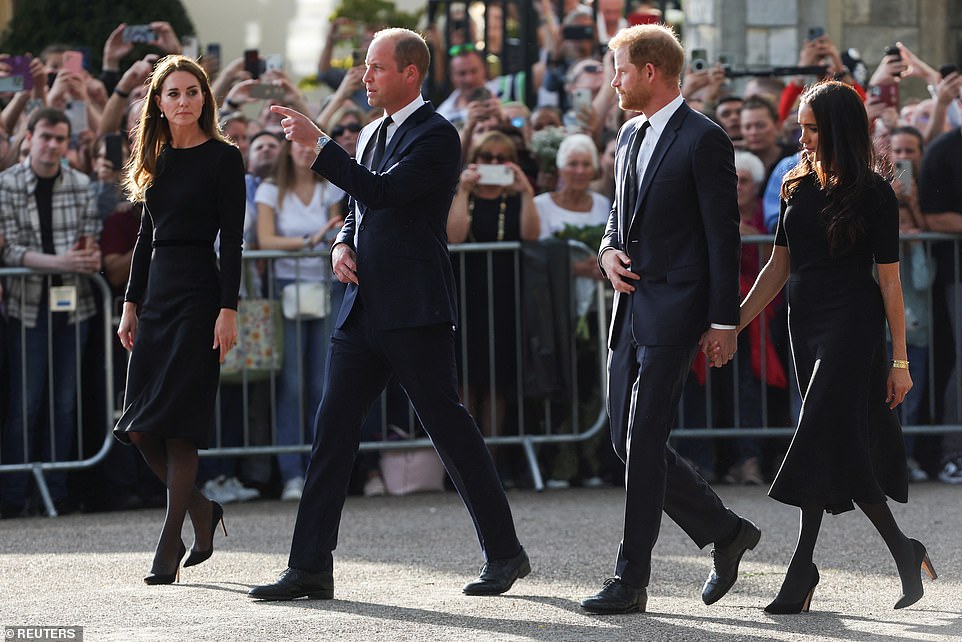 During the walkabout, the Prince and Princess of Wales appeared to walk slightly ahead of the Duke and Duchess of Sussex

As they reached the gates, the two couples stopped to look at some of the floral tributes left by well-wishes.

Harry and Meghan stayed close together, and often if they were separated, were seen reaching for each other to hold hands.

As the royals started the long walk to Windsor Castle, they split up, each attending to one side of the crowd, which was heard cheering of both the couples.

Once they finished meeting the public, the four reconvened in front of their vehicles, where they had a brief chat, before getting into their respective cars. 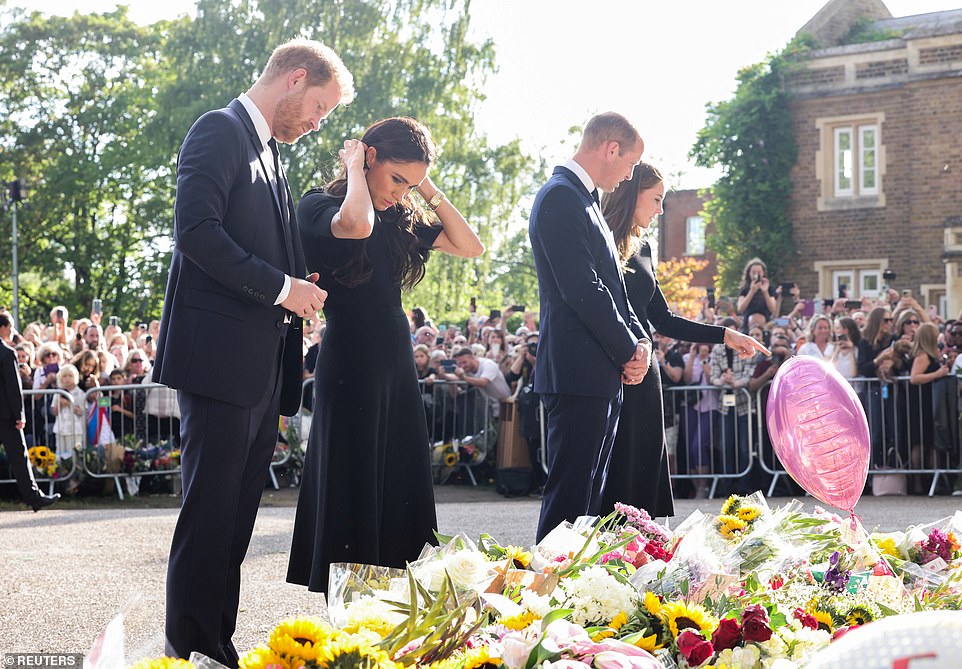 The two couples seemed to engage very little with each other, instead staying separate 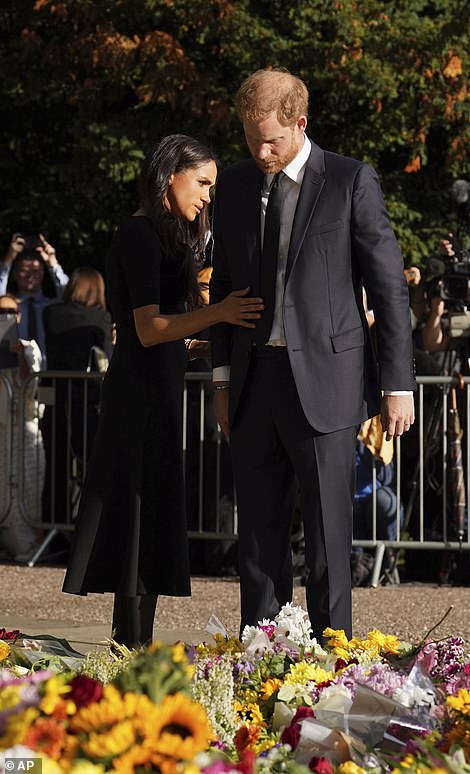 A Kensington Palace source said that the Prince of Wales invited the Sussexes to join him and the Princess of Wales earlier today.

One well-wisher who spoke to Harry and Meghan told MailOnline:’It’s lovely to see them both together. Maybe they can get back to a proper relationship. Lovely ripple went through the crowd as they approached. Hopefully the healing between Harry and his brother can start now. I’m just so excited to have seen them both together. It’s lovely.’

Today’s appearance by the couple followed Prince William sharing a public statement regarding the death of his grandmother.

In the post, which he shared on Instagram, the royal wrote: ‘On Thursday, the world lost an extraordinary leader, whose commitment to the country, the Realms and the Commonwealth was absolute. So much will be said in the days ahead about the meaning of her historic reign.

‘I, however, have lost a grandmother. And while I will grieve her loss, I also feel incredibly grateful. I have had the benefit of The Queen’s wisdom and reassurance into my fifth decade. My wife has had 20 years of her guidance and support. My three children have got to spend holidays with her and create memories that will last their whole lives.

‘She was by my side at my happiest moments. And she was by my side during the saddest days of my life. I knew this day would come, but it will be some time before the reality of life without Grannie will truly feel real.

‘I thank her for the kindness she showed my family and me. And I thank her on behalf of my generation for providing an example of service and dignity in public life that was from a different age, but always relevant to us all.

‘My grandmother famously said that grief was the price we pay for love. All of the sadness we will feel in the coming weeks will be testament to the love we felt for our extraordinary Queen.

‘I will honour her memory by supporting my father, The King, in every way I can.’ 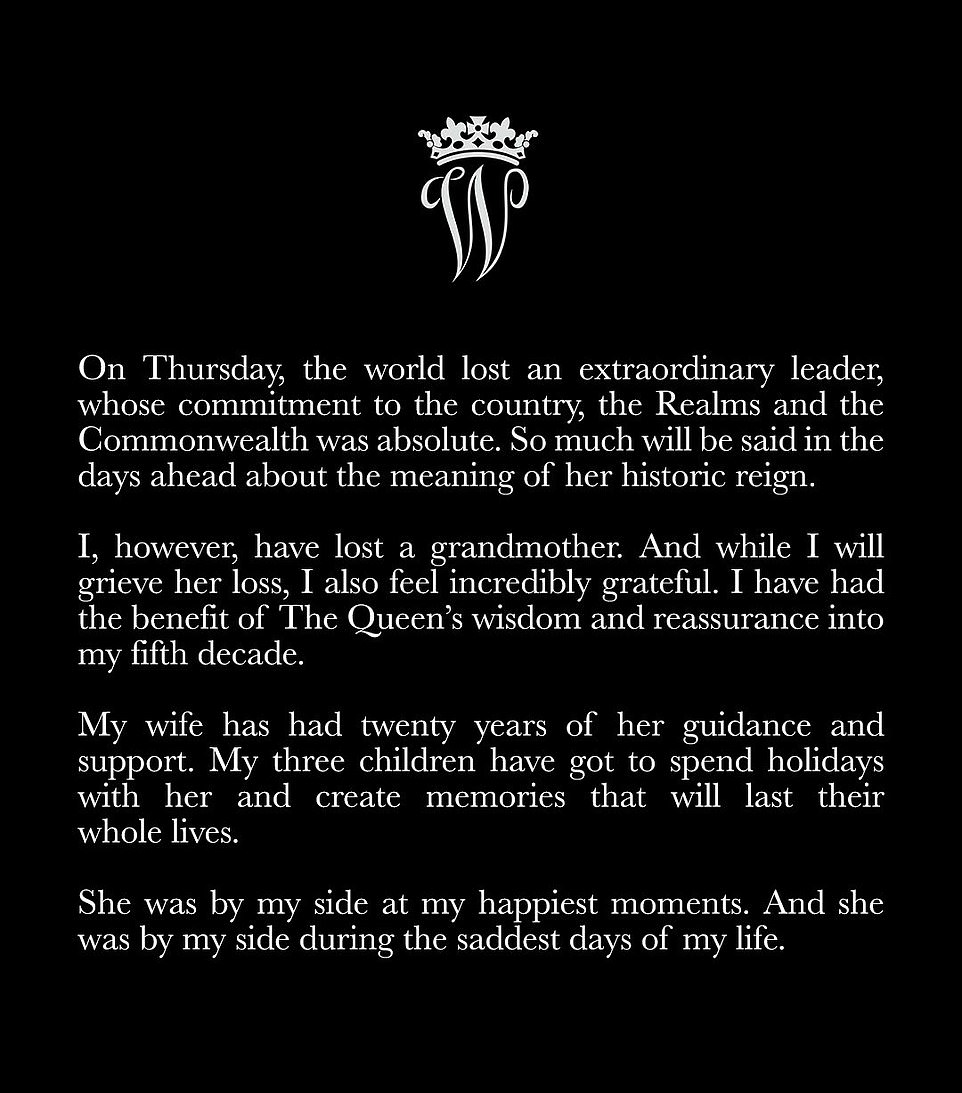 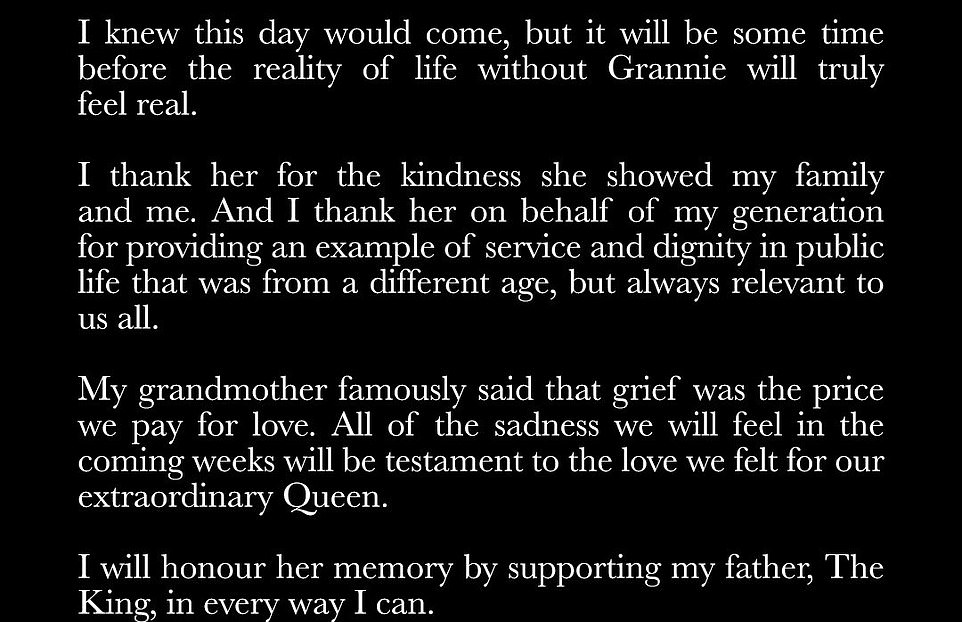 It was revealed yesterday that William and Kate will become Prince and Princess of Wales, with King Charles confirming the news in his first televised address to the nation since the death of the Queen.

He said: ‘Today, I am proud to create [William] Prince of Wales, Tywysog Cymru, the country whose title I have been so greatly privileged to bear during so much of my life and duty.

‘With Catherine beside him, our new Prince and Princess of Wales will, I know, continue to inspire and lead our national conversations, helping to bring the marginal to the centre ground where vital help can be given.’ 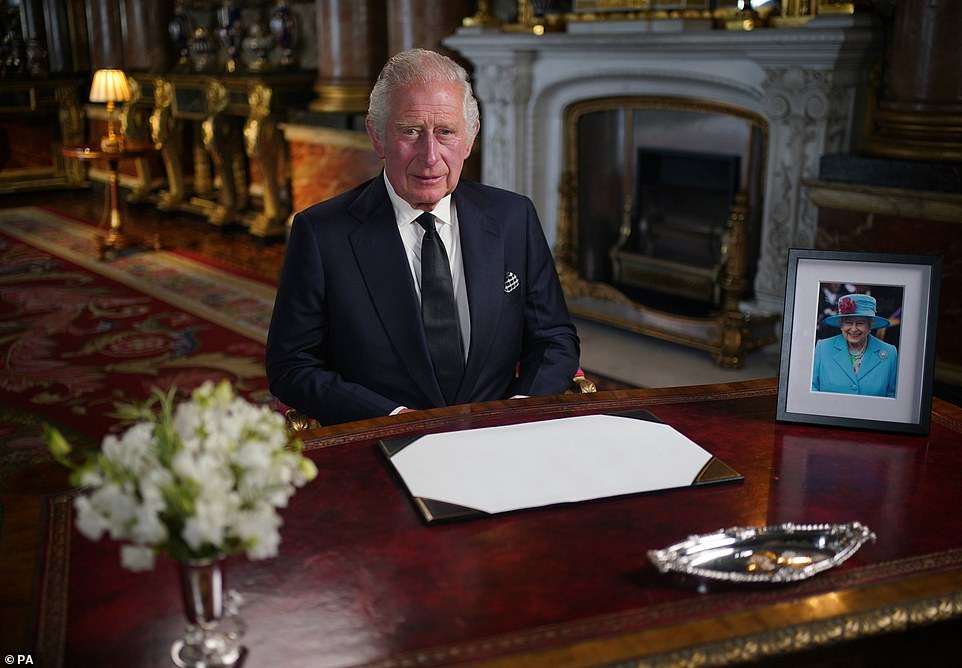 In his first televised address to the nation since the death of the Queen, King Charles III confirmed his son Prince William would inherit his title of the Prince of Wales and his wife Kate would become Princess 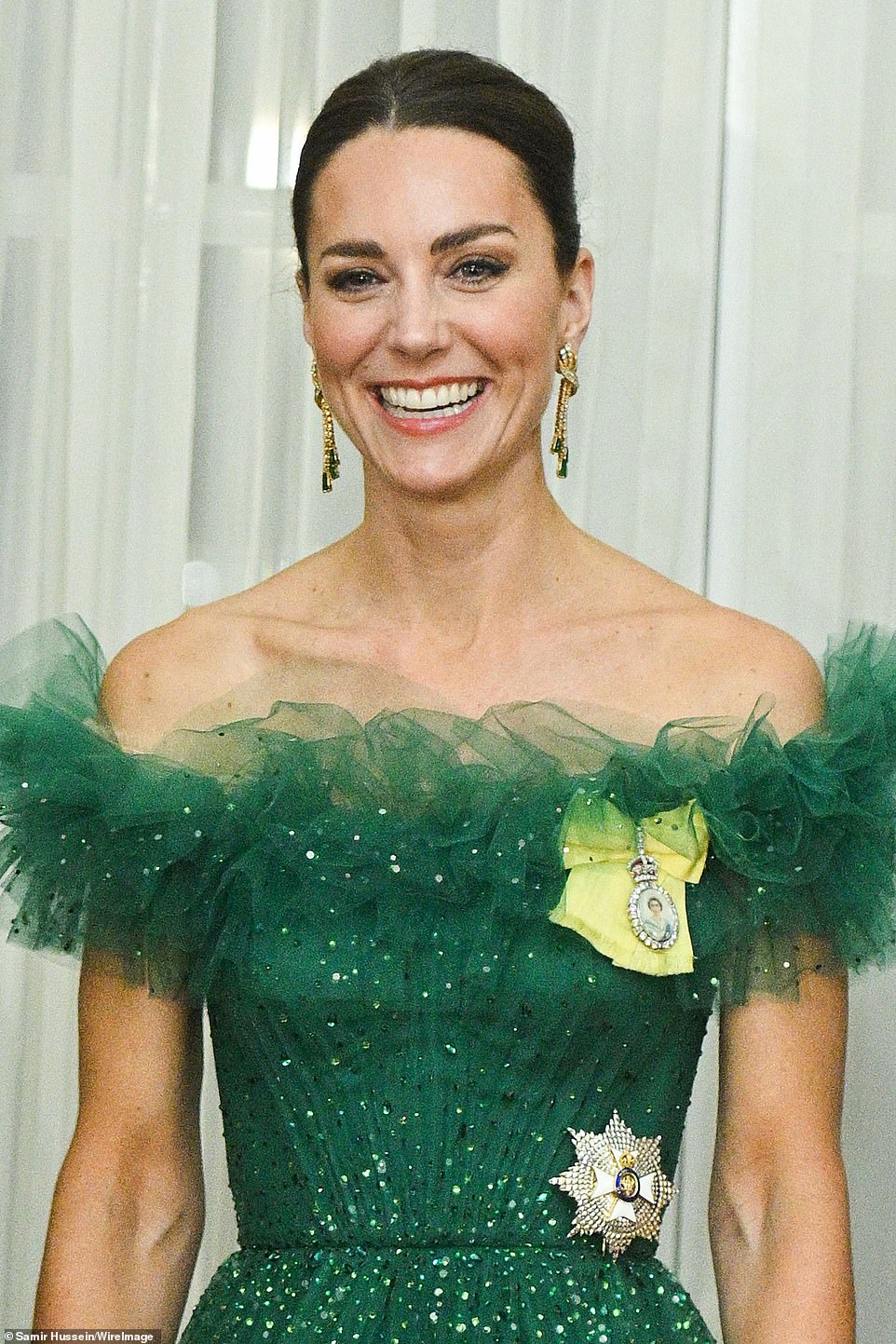 However a source said the new Princess of Wales ‘appreciates the history associated with this role but will understandably want to look to the future as she creates her own path’.

The royal source said: ‘The couple are focused on deepening the trust and respect of the people of Wales over time.

‘The Prince and Princess of Wales will approach their roles in the modest and humble way they’ve approached their work previously.’

Technically, Charles’s wife, Camilla Parker-Bowles, has been the Princess of Wales until now, but she has used the feminine equivalent of Charles’s Duke of Cornwall title, the Duchess of Cornwall.

The Duchess of Cornwall is thought to not use the Princess of Wales title out of respect for Charles’s ex-wife Princess Diana, who died in Paris in August 1997. 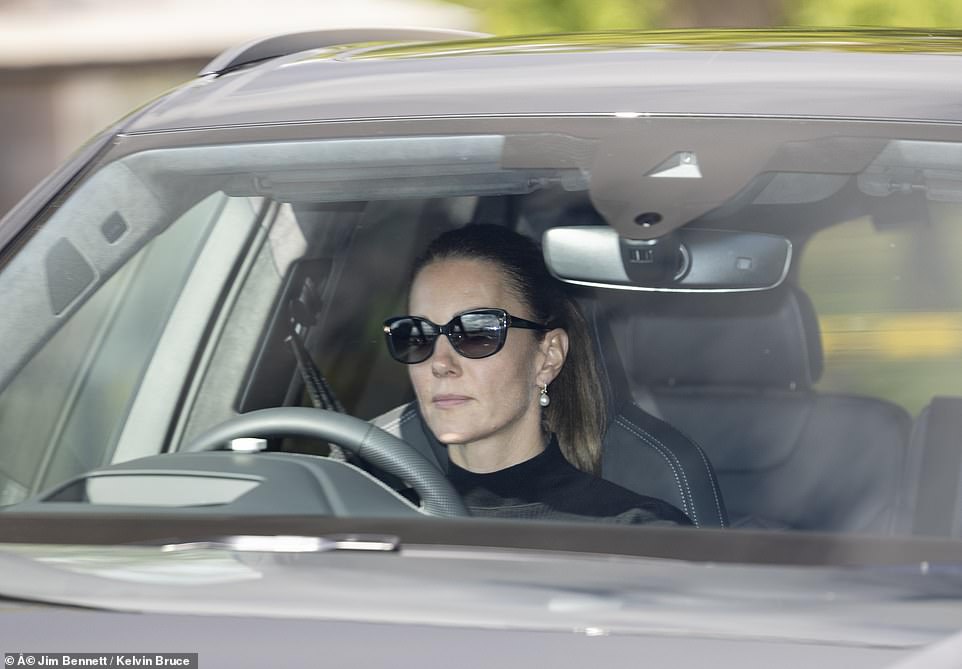 Kate, dressed in black and wearing sunglasses, will be heartbroken that Her Majesty has passed away 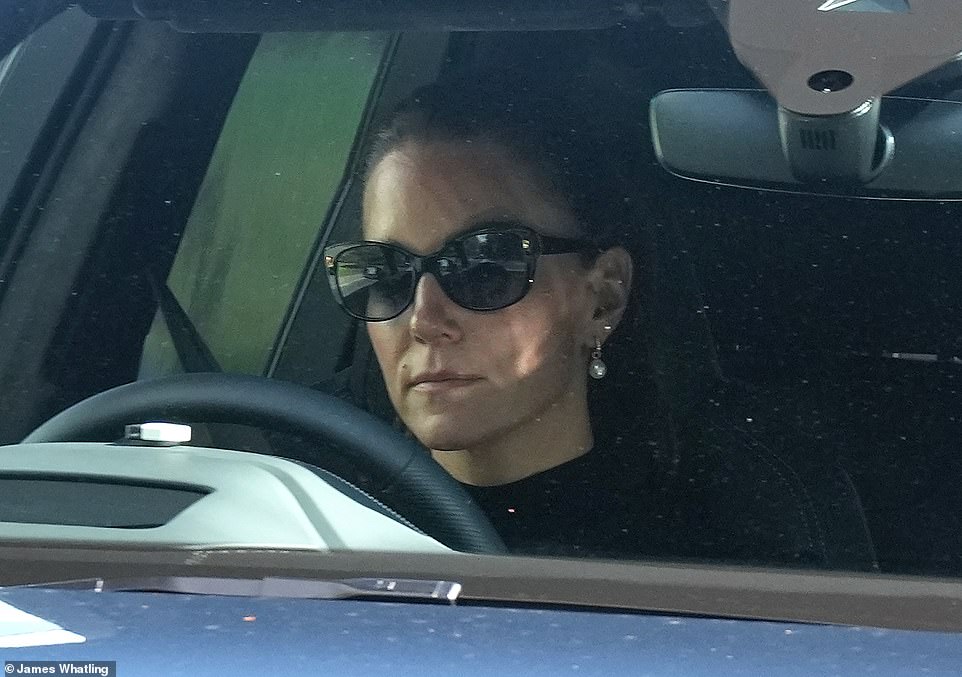 The Duchess of Cornwall and Cambridge, now the Princess of Wales, is seen in Windsor looking sombre after the death of Queen Elizabeth

Grieving Kate was spotted yesterday for the first time since the death of Her Majesty on Thursday.

Hiding her eyes behind dark glasses, and wearing black, Kate, was spotted driving to pick up her three children from school after their first week at Lambrook near Ascot yesterday afternoon.

The death of their great-grandmother the Queen will be a heavy blow to Prince George, nine, Princess Charlotte, seven, and four-year-old Prince Louis, as they and their parents begin a new life at Adelaide Cottage in the grounds of Windsor Castle – where Her Majesty spent most of the year.

On Tuesday ‘the gang’, as they call themselves, chased up the steps of their new prep, prompting beams of delight from William and Kate who held their hands when they arrived. Within 48 hours the country was in mourning – but the Duchess decided to stay in Windsor to support the children at school as William flew to Aberdeenshire on a RAF jet. 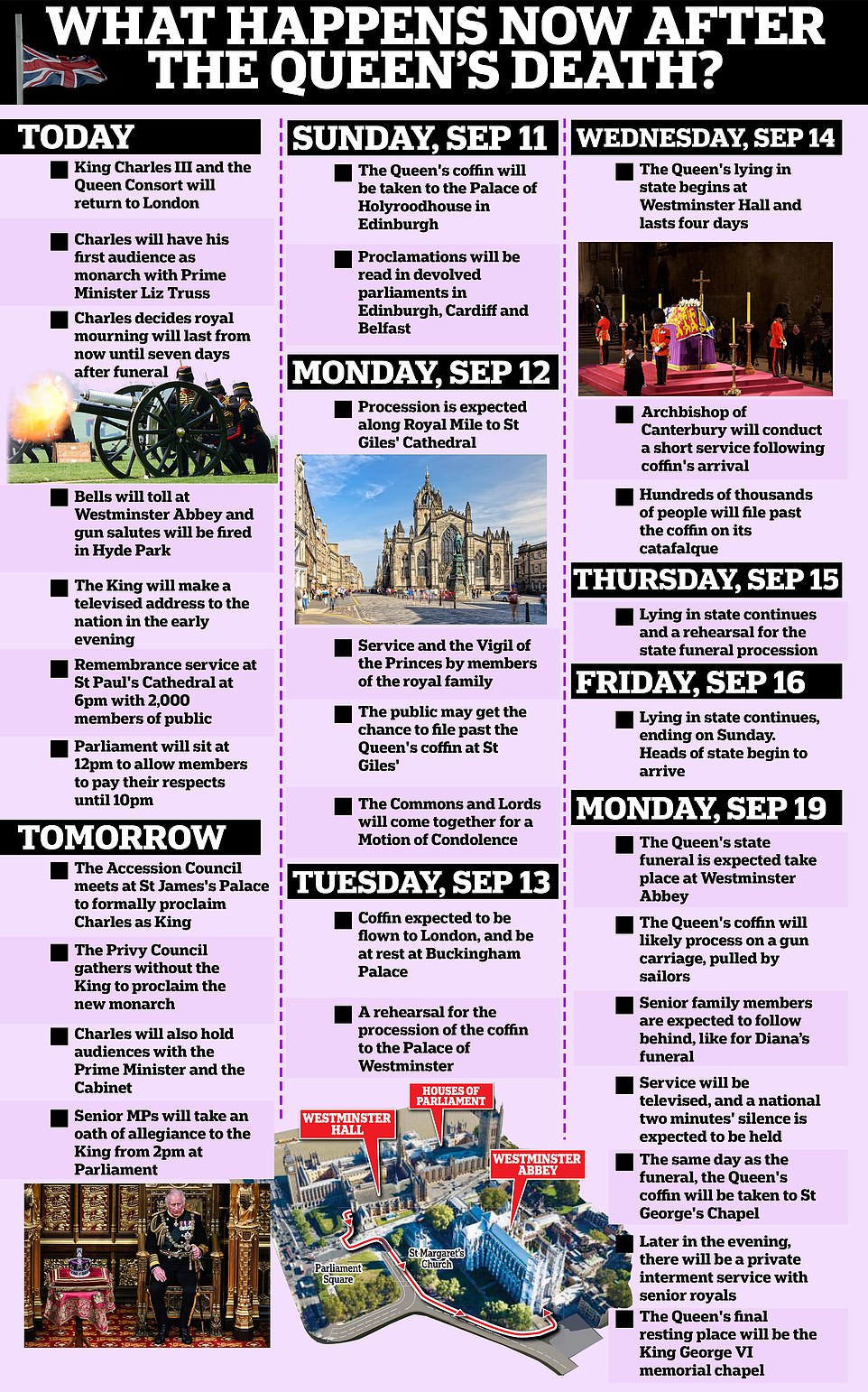