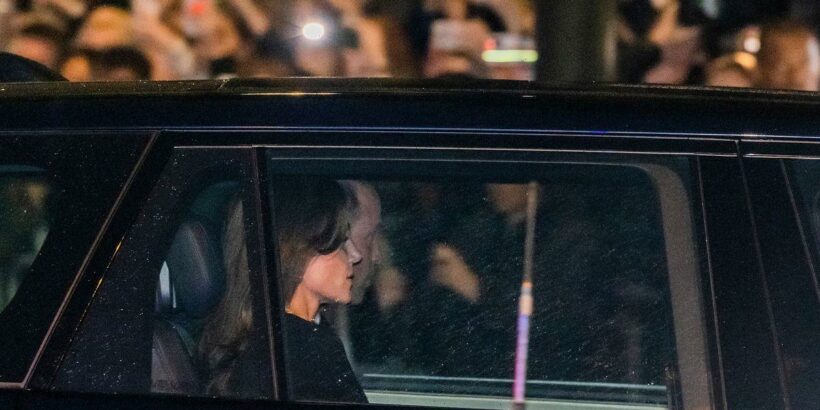 Kate Middleton has paid her own subtle tribute to the Queen by wearing a pearl necklace as she received the coffin at Buckingham Palace on Tuesday evening.

Dressed in a smart back ensemble, The Princess of Wales, accompanied her husband Prince William en route to the royal London home as the senior members of the Royal family gathered to receive the queen’s coffin for her final ever night in Buckingham Palace, before she would lie in state until next week’s funeral.

Alongside her chic outfit, Kate wore one notable accessory, a string of pearls, in what appeared to be a nod to the late monarch who was well known for her love of the freshwater beads.

Although the addition of the pearls could also be considered a sartorial statement in keeping with Kate’s usual polished sense of style, the classic jewellery item also holds a particular significance among the royal family too.

Since the reign of Queen Victoria, pearls have often been worn by royals when they are in mourning, with the Queen first adopting the practice after the loss of her husband Prince Albert.

So distraught was the historic Queen by the loss of her husband, that she only wore black clothing for the rest of her life alongside white pearls, as they were considered to denote purity and tears.

This 100 page tribute looks back at the life of our most beloved monarch, Queen Elizabeth II, marking key events during her remarkable 70-year reign, as well as her childhood as a young princess, her enduring love for Prince Philip and her family, and the lasting legacy she leaves our nation.

This edition is available to buy in stores now or it can be purchased online here.

Queen Elizabeth II also began to wear pearls frequently following the death of Prince Philip last year, with members of her own mourning family now continuing the same tradition in the days since her death last week.

Queen Consort Camilla sported a necklace comprised of four strands of pearls when she arrived at King Charles’ Accession Council Ceremony, where her husband was formally declared the new King.

Kate meanwhile was also spotted wearing them as she collected her children from school following the grave announcement of the Queen’s passing, with the Princess of Wales also wearing them again on Tuesday to receive the coffin.

It isn’t just Royals that have worn pearls as a show of respect either, as former Prime Minister Theresa May and Patricia Scotland, Baroness Scotland of Asthal, also both chose to wear pearl necklaces to Charles’ formal Accession ceremony.

Yet as well as being a classic item of jewellery with a rich history in mourning traditions of the family, they also held a fair more simple purpose too – as Queen Elizabeth was known to be a fan of them in general.

This makes the continued wearing of them, both a nod to royal tradition and a heartfelt tribute to the late monarch.