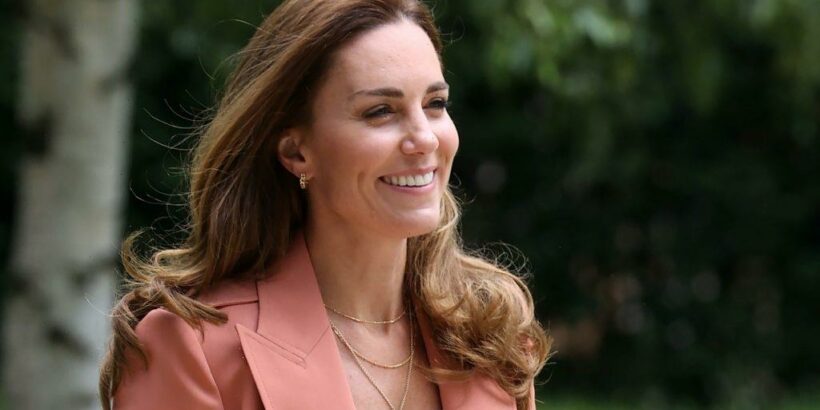 Before joining the royal family in 2011 and becoming Catherine, Duchess of Cambridge, Kate was considered a commoner, just like many of us today. That isn’t to say she didn’t lead a fascinating — and notably lavish lifestyle — just that she was not yet royal.

Kate did, however, grow up with successful and wealthy parents, attend a notable private boarding school, and meet a British prince at the University of St. Andrews — changing the course of her life as a commoner to being crowned as queen consort.

Born to Michael Middleton and Carole Middleton on January 9, 1982, in Reading, Berkshire, England, the future royal made her way into this world with the name Catherine Elizabeth Middleton. The eldest sister is one of three children, having a sister named Pippa (or Philippa) Middleton and brother James Middleton.

According to Town&Country, Kate’s parents have a combined net worth of over $67 million — a substantial amount of wealth that began well before their daughter found love with a prince. It goes without saying that the three children were well-off growing up.

In fact, Kate lived in a half-million-dollar house in Vernham Dean while growing up before making her way to a more than a million-dollar apartment in Chelsea, London, with her family.

Before going on to make the life-changing decision to attend the University of St. Andrews and meet her future husband, Kate was a commoner who attended some of the finest boarding schools in the area. This included St. Andrew’s Prep School, Downe House, and co-ed Marlborough College.

And just like us regular commoners, she fell victim to the silly antics of those last adolescent years in school — earning herself a unique nickname at the time.

According to The Sun, royal writer Claudia Joseph revealed that the soon-to-be Queen Consort was said to have “flashed her bottom at the boys out of the window” when she was 16 — to which, royal writer Christopher Andersen added that “she was so famous for this at the school she became known as Kate Middlebum.”

This shocking reveal only gets more shocking as we all learned from other friends of hers at the time that it became a regular occurrence for the young Kate, who was just coming out of her shell as a teenager. While you’ll certainly never see her behave as such again, it does shine a light on how human and relatable the royal addition is.

Kate’s time at the University of St. Andrews in Fife, Scotland, marks the last few years of her time as a commoner. It would be here that she met, fell in love with, and would eventually marry her prince — Prince William.

Despite coming from a family of wealth herself and being closer than ever to royal wealth, Kate had a broadly relatable, commoner job as a waitress during her time in college. According to what the royal wife said in a BBC special called A Berry Royal Christmas, serving non-alcoholic cocktails brought her back to her days at the University of St. Andrews.

The Duchess of Cambridge said the experience “reminded me of my university days when I did a bit of waitressing.” While this news is fascinating to hear about by all her admirers, the duchess admitted to Berry, “I was terrible.”

Nonetheless, there’s no denying it was very commoner of her to dabble in it in the first place when we all know she could afford not to even before her marriage to William.

Since joining the royal family in 2011, there has been no shortage of hard work, fashionable outfits, and most importantly — charitable work from the Duchess of Cambridge. For British royalty, the charities and causes you support are your legacy, especially following the footsteps of none of the “The People’s Princess” herself.

There’s no doubt that Kate’s royal life is building her legacy as it once did for Princess Diana. Whether she takes on her mother-in-law’s title is up for debate — but either way — she will likely go into history as “The Caring Duchess” who continued the princess’s work.

Kate is next to honor Princess Diana’s legacy

Years after Princess Diana’s death, her ex-husband Charles, Prince of Wales, married Camilla, Duchess of Cornwall. Out of respect for his highly loved ex-wife, who died in a car accident nearly eight years earlier, the new royal wife did not take on her title as Princess of Wales upon marriage.

This means the very next person to honor Diana’s legacy and take on her title of Princess of Wales is none other than the beloved Kate. The duchess is set to receive the title when Queen Elizabeth dies, Charles takes on the title of King, and William becomes the Prince of Wales.

We have no doubt this soon-to-be princess will uphold it with just as much grace, kindness, and passion as the princess before her. We may even be looking at the next to earn the title of “The People’s Princess” or something similarly special as Diana was certainly one of a kind.

Kate Middleton’s building her own legacy: the Centre for Early Childhood

On June 8, 2021, Kate launched a passion project that will likely contribute to her own lasting legacy in the British royal family: the Centre for Early Childhood. She compares the project to tackling “the social equivalent to climate change” and is looking forward to creating “a happier, more mentally healthy and more nurturing society.”

According to The Royal Family Channel, “The Royal Foundation Centre for Early Childhood will focus on three key areas: research; collaboration; and development.”  Alongside the big project, they will also launch “Big Change Starts Small, bringing research underlining the impact of the early years on individuals and society.”

“I’ve spoken to psychiatrists, neuroscientists, practitioners and academics, and parents alike. And what has become clear is that the best investment for our future health and happiness is in the first five years of life,” the Duchess of Cambridge added. “And that is why, today, I am launching the Royal Foundation Center for Early Childhood.”

By now, you likely remember Diana as everyone else does: “The People’s Princess,” who supported more than 100 charities and causes, most notably being her ban on landmines. The people genuinely felt Diana cared about them and had their best interests at heart as she made sure to do as much as she could to create a better world for all.

Stepping into such a prestigious title (if they decide to do so) won’t be easy, but the Duchess of Cambridge is well on her way to filling shoes that made a significant difference. In fact, she has supported 15 charities and 25 causes so far — and she’s not even the Princess of Wales yet.

It doesn’t stop there, either.

According to The Royal Family Channel, Kate has also become Patron to many charities and organizations since joining the royal family — 19 to be exact, which means her support and representation supersede general assistance and reflect the interests of the duchess (or royal party). For the Duchess of Cambridge, these interests are centered around family and children.

Kate and William have brought a lot of attention to the royal family in recent years, with a spotlight on their royal wedding, their little princes and princess, as well as the Duchess of Cambridge’s trending styles, charitable work, and incredible transition into royalty. There’s just something captivating about a young woman with no royal blood fitting into the royal family with seemingly no effort.

Although William isn’t set to take over the throne next, Kate is patiently waiting in line to take on the title of queen consort. In fact, people are already buzzing about her being on track to be a ‘dignified’ and ‘fantastic Queen’ as she prepares for the title and responsibilities that lie ahead for her.

What it will take for Kate Middleton to be queen consort?

Since Kate does not have royal blood, she will become queen consort rather than a queen. For this to happen, William will have to become king. As of right now, Charles is set to be king and Camilla is controversially set to be queen consort (or princess consort) after the death of Queen Elizabeth II.

Charles would have to die before the queen or choose to abdicate for William and the Duchess of Cambridge to take on the title next.

With that being said, Timeline says that “the future for the royal couple is a life very different from their university romance. William and Kate are set to change the face of the British monarchy. Its very survival may depend on them.”

Experts predict Kate will be a great queen consort

The modern-day royal couple is not only fiercely loved and admired by the United Kingdom and worldwide, but they are tackling modern-day problems that need to be addressed like mental health, cyberbullying, childhood development, and wildlife conservation. While this doesn’t tell us exactly what the future Queen Consort will be like, it does give us an idea of what they stand for.

“It’s impossible to tell what sort of Queen she’d be like. We can only observe what we see and read,” Ferdinand Mount, social historian and author, told Timeline. “She seems to be a rather modest, cautious sort of person who’s unlikely to endanger the monarchy, and I should’ve thought she would be a kind of reassuring presence, but who knows what the future will bring.”

“I think Kate will make a dignified Queen,” Catherine Mayer, journalist and author, said. “It’s very hard to imagine her sort of emerging in a sort of social activist role like her father-in-law or anything like that. I think, you know, in terms of what people expect of the Queen — as the current Queen has defined it — she’ll be quite close to that same model.”

“I think Kate’s gonna make a fantastic Queen,” Emily Nash, royal correspondent at Hello, added. “She is hugely interested in the causes she supports, and I can imagine her giving that same level of commitment to the role in the future. She’s got great diplomatic power.”

The documentary adds that the Duchess of Cambridge will enter into the title with decades of experience in both life outside and inside of being royal — and this is said to be the advantage she will bring to the table as Queen Consort.

Kate is already preparing for her future title

Of course, the Duchess of Cambridge isn’t just sitting around and waiting for the queen consort title without any proper preparations. The title is too important for her not to be preparing for as soon as it became clear she and Prince William would take this journey together.

We all already know about the great charities and causes close to Kate’s heart that she has worked so hard for, particularly her new launch of Centre for Early Childhood, but that isn’t all that is expected of her as she makes her way to Queen Consort.

According to Good to Know, Kate has been preparing for the title by taking on more patronages, offering messages of support during times of distress, getting involved with more royal engagements, and shaping the image of the royal family in a positive light it needs to survive.