This post contains spoilers for the March 12 episode of This Is Us. Years of sitcom viewing have taught me to expect characters giving birth during a riotous half hour of hospital shenanigans, but This Is Us has now tackled the more uncertain results of a risky pregnancy. While last week’s episode ended with Kate stabilized after going into premature labor, March 12’s "The Waiting Room" took a very different direction. Following a scary early delivery, Kate and Toby’s son arrived, albeit with some restrictions. He’s still in the NICU for now, but Kate’s baby’s name on This Is Us already has fans sobbing.

Ahead of the episode, creator Dan Fogelman explained to The Hollywood Reporter that the slow and intimate nature of "The Waiting Room" was the show’s attempt at producing a play for TV. This resulted in quiet conversations between the other Pearsons that occasionally blew up in the hospital waiting room. And you thought your family was embarrassing in public.

As the family was left in the dark about Kate’s (Chrissy Metz) condition, Randall (Sterling K. Brown) and Beth (Susan Kelechi Watson) jabbed at each other in their disagreement about Beth working. Zoe (Melanie Liburd) tried to encourage a weakening Kevin (Justin Hartley) to open up with her about his relapse, and Rebecca (Mandy Moore) was mentally reliving her last experience with Jack (Milo Ventimiglia) in the hospital. Meanwhile, an optimistic Miguel (Jon Huertas) was doing his best to distract the others from Kate’s health.

His efforts included asking the group if Kate and Toby had any names picked out, and Rebecca debunked Randall and Kevin’s assumption that their son would automatically be Jack. According to her, the couple wanted to meet the baby before selecting a name. She reminded them that it’s hard to name someone you haven’t met before, which she knows quite well after Randall spent the first few weeks of his life as Kyle. 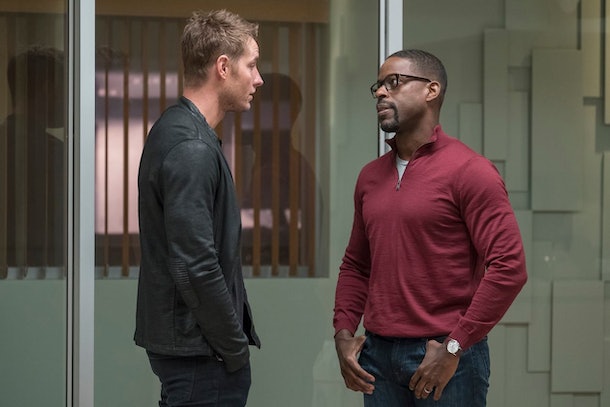 The waiting room tension, specifically Kevin and Randall’s clash about their roles in the family, cooled down when Toby (Chris Sullivan) finally emerged from the depths of the hospital. He revealed that their son had arrived via an emergency C-section, but because he was so premature, he was now hooked up to a breathing machine in the Neonatal Intensive Care Unit. At first glance, the situation was rough, but as Rebecca reminded the family earlier, the only thing that mattered was the safety of Kate and the baby, which they had for now.

When Kate and Toby visited their son in the NICU, Kate understandably gushed over him. While Toby couldn’t get past how small he was, Kate spilled that although she had been hesitant about it, she wanted to name the baby Jack. Toby agreed, prompting Kate to "speak" to her father Jack about doing her a favor and making sure his grandson would be OK. If Jack Pearson’s spirit has anything to do with this kid, it’s safe to say that he’s in good hands.

It’s hard to say that we didn’t see this name choice coming, but the fact that the decision wasn’t set in stone definitely makes little Jack’s arrival more emotional. Consider me prepared for any future, teary montages comparing Jack and baby Kate to Kate with her own Jack.