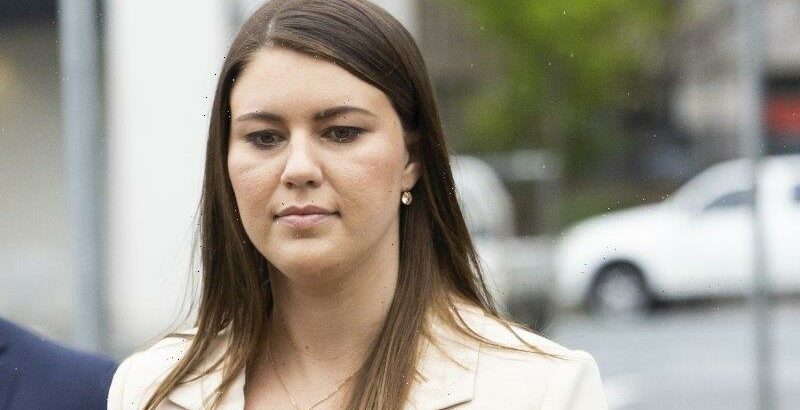 Brittany Higgins sat in court and watched herself.

The former staffer and rape complainant, now 28, looked on as CCTV footage of her 24-year-old self was played for the jury in the trial of her accused rapist Bruce Lehrmann.

He has pleaded not guilty to sexual intercourse without consent. 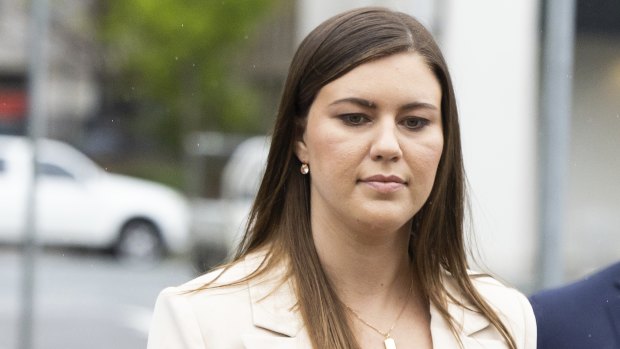 Brittany Higgins has described to a court the night of her alleged rape.Credit:Alex Ellinghausen

Higgins, wearing a white dress and heels, was filmed walking into the Dock Bar in Kingston, Canberra, with a straight back and a sure step.

On Wednesday, Higgins sat in court, a few feet from the jury, and watched as the video showed her erstwhile colleague arriving at the bar about an hour after her.

Her 24-year-old self greeted Lehrmann, seemingly happy and friendly.

The disputed events of that night would change both their lives forever.

About six hours and more than 10 drinks later, she alleges, Lehrmann went on to rape her in the Parliament House office of their boss, Minister Linda Reynolds.

But in the footage, there was no hint of anything except what it appeared – a cheery night out with a group of Parliament House colleagues in their 20s.

Lehrmann was wearing a blue button-up shirt, open at the collar.

The accused and the complainant chatted easily over the hours, often standing beside each other, with Lehrmann buying Higgins at least two drinks.

Higgins stayed mostly composed in courtroom SC3 of the ACT Supreme Court as she guided the Crown Prosecutor through the footage while it was played, helping with names of members of the group and tallying the drinks she consumed.

The video compressed a four-and-a-half hour drinking session into about an hour of footage.

Right at the end, where the timestamp read 11.49pm, Higgins was passed her final drink by one of the men in the group.

The party made to leave the bar, and she skolled the drink, before exiting with her colleagues, including Lehrmann.

There, the video ended – and the courtroom was silent.

“You appeared to skoll a drink,” Crown Prosecutor Shane Drumgold, SC, said, addressing Higgins as she sat in the witness box.

“Have you done that before?”

“Have you ever done that as an adult?” Drumgold asked.

“Have you consumed that amount of alcohol as an adult over that period?”

“No,” the complainant said, and she lost her composure.

She appeared to cry silently as the jury was dismissed for the day and filed out past her.

Earlier, the court had heard that the Monday after Higgins’ alleged rape in the early hours of Saturday morning, she was back at work.

They had cordial, professional interactions that day, according to evidence.

She did not go to a GP. She did not take the morning after pill (although a few weeks later she purchased a pregnancy test).

She said she hadn’t yet “processed” what had happened to her.

“I was really cognisant of all the party implications all the way through, because of pressure I was feeling,” she told two Australian Federal Police officers in May 2021, in a recorded interview played in court during the morning session.

“I made it hard for myself … I would have conversations in person, I spoke on Whatsapp … I was so scared coming forward.”

The police video showed that Higgins appeared to falter.

She began to cry.

“It was so stupid,” she said to the police.

Higgins told police that when she woke the morning after the alleged incident, in a state of undress, alone and disoriented in the minister’s office, she went to a small, windowless room in the ministerial suite.

She cried for an hour, ate a box of Roses chocolates and threw up, before attempting to compose herself and leave the building.

In the context of the minister’s office where she worked, Higgins was, she said, “very disposable”.

“The disparity between him and me was huge,” she said, in reference to Lehrmann.

He kept his head down and took notes in a Moleskine notebook held in his lap.