KFC have divided customers with its new campaign urging foodies to try their bacon burger before becoming vegan.

The fast food chain has published a series of adverts across social media and in newspapers, urging people to buy their I Love You Bacon burger.

The advertisement takes into consideration the rapid increase in the number of people turning to a vegan lifestyle and urges customers to try the burger before overhauling their diet.

Many Facebook users have criticised the campaign, slamming the timing and warning that mentioning vegans will cause KFC to loose sales.

One Faceboook user said about the post: ‘I believe this will be your demise KFC’. However others loved it, with one claiming: ‘KFC’s advertising is the best’. 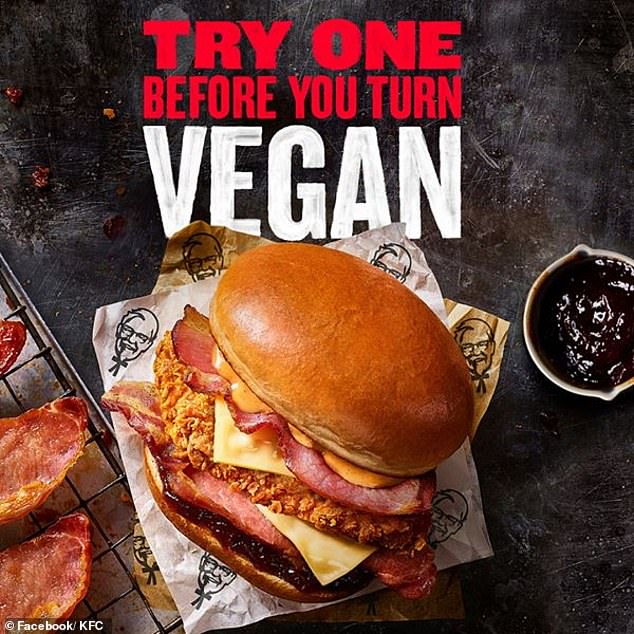 A stream of social media users blasted the fast food chain claiming that urging people to not live a vegan lifestyle would have disastrous consequences.

Many argued the fast food chain shouldn’t be ‘shunning’ vegans before launching their own vegan friendly meals.

Speaking on Facebook, one person wrote: ‘This is going to come back to bite y’all in five or so years when you’re desperately scrambling to appeal to the vegan market like every other fast food chain…’

Another said: ‘LOL but you’re currently working on a vegan option. Burning that bride for new customers, great marketing strategy!’

Other commenters on KFC’s Facebook posts praised the campaign and slammed those who found an issue with it.

A user writing under the name Ben Banks wrote: ‘A primarily meat focused fast food restaurant and yet vegans are getting triggered?

‘Move along to a non-meat Facebook group and restaurant no need to get all angry… Have a nice day and find an excuse to moan elsewhere’.

A second added: ‘While there’s chicken and KFC on this planet I am never going vegan’.

Speaking to Mail Online, a KFC spokesperson said: ‘Yep, let’s face it – we know it’s probably the worst possible point in history to launch our I love You Bacon Burger.

‘Unprecedented numbers of people are eschewing meat, but we hope our fans (and the bacon lovers that remain!) will appreciate the irony and love the burger as much as we do.

‘That said, we’ve made no secret of the fact that our finest minds are working away on a brand new, meat-free treat – so watch this space.’ 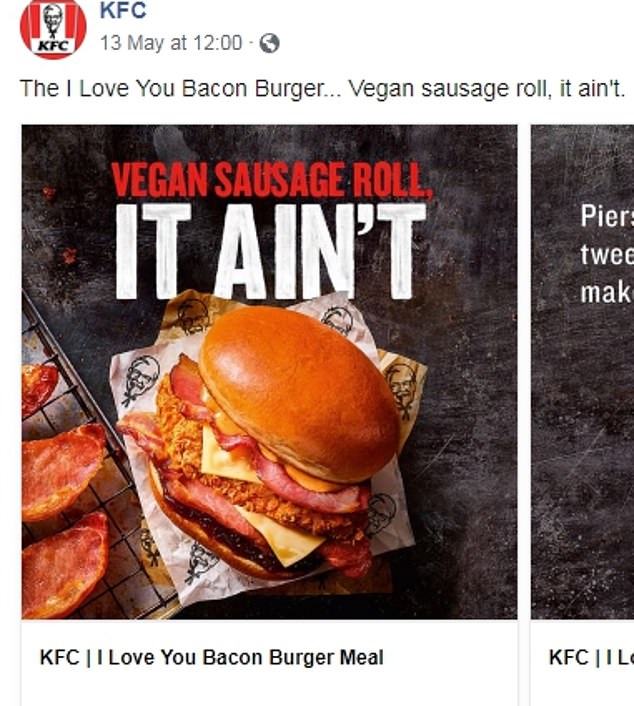 Despite the growth in veganism KFC have remained a popular fast food choice for many people.

The popular food chain recently made headlines after a story began circulating that a student had manage to dupe them into a year’s worth of free food.

KFC responded to the allegations which first surfaced in Africa by declaring that it isn’t true.