In April 2018, Khloé Kardashian welcomed her first child, True Thompson, with boyfriend and NBA star Tristan Thompson. The first glimpse fans had of their daughter was adorable, but Khloé Kardashian’s first selfie with True is honestly the photo to end all photos. Khloé has never looked more radiant, and True is the cutest, most precious newborn on the planet. Her cheeks alone are something else. If taking selfies were an Olympic sport, the entire Kardashian-Jenner crew would have enough gold medals to make literal Olympic medalist Caitlyn Jenner jealous. So it’s never too early to introduce the family’s newer members to photography life. The way they do it, it’s a legitimate art.

On May 26, Khloé shared a photo of herself with True on Instagram, captioning it with a simple: "Mommy’s Little Love." In the photo, True appears to be resting in her mom’s arm, with with her eyes closed. New mom Khloé purses her lips for the camera in a way that she and her sisters have truly mastered — if they didn’t invent it in the first place. There are definitely some filters at work here — possibly Snapchat and Instagram — and they’re doing their job. The picture glows! Also, for those of you who like continuity, it appears that the new mom used the same "flower behind the ear" filter that Khloé used to share her first-ever clip of True in play here as well. All together, now: Awww.

It seems hard to believe, but this is only the second permanent image of True (i.e., not in an Instagram Story or Snap Story) that Khloé has shared with the public. She’s just as adorable as she was on her one-month birthday, though. While Khloé has done her best to stay out of the spotlight in the last few weeks, it’s been unavoidable for True’s dad: Thompson plays for the Cleveland Cavaliers, and the NBA playoffs are still in full swing. The most recent Khloé-related image Thompson posted to Instagram was on his birthday in March. Still, he’s spoken about life with newborn True to the media, gushing over how wonderful his daughter is to People.

Longtime fans of Khloé know how much the entrepreneur went through before she had a child, which is why every new picture of True feels so heartwarming. Khloé has always been open with fans about her emotional journeys, relationships, and more, and that’s why her entire pregnancy felt personal. She quietly welcomed True in Cleveland back in April, amidst rumors of boyfriend Thompson allegedly stepping out on her throughout their (ongoing) relationship. Since then, there have been back-and-forth stories in the press about Khloé’s family and her boyfriend, but the new mom has declined to comment publicly. However, she and Thompson have been spotted together throughout the month of May. The couple went out to local restaurants, she sat court-side for one of his games, and they’re reportedly living together (again). It’s a reassuring sign for fans of Khloé, who want the fierce Kardashian sister to get the happily ever after she deserves. 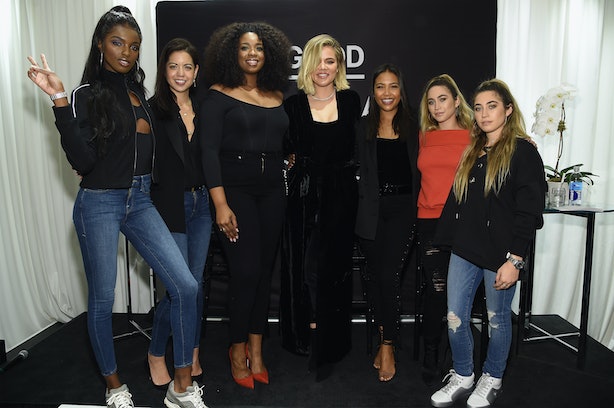 One of Khloé’s most well-known personality traits is how outspoken she is about everything. Fans never have to wonder how Khloé’s feeling, or what’s on her mind, or what she’s thinking about what you’re doing. She tells you all of those things, and does so bluntly. It’s uncommon for her to keep anything to herself, particularly about her family, but the supposed drama surrounding her boyfriend and herself has an air of secrecy to it. There are any number of reasons why Khloé would choose not to share everything with the public, and fans can’t be sure of why she’s choosing to lay low now. But until the designer decides to confirm (or deny) any of the alleged news the public is led to believe, there are at least really cute photos of her happy, healthy daughter to gaze at in the meantime.