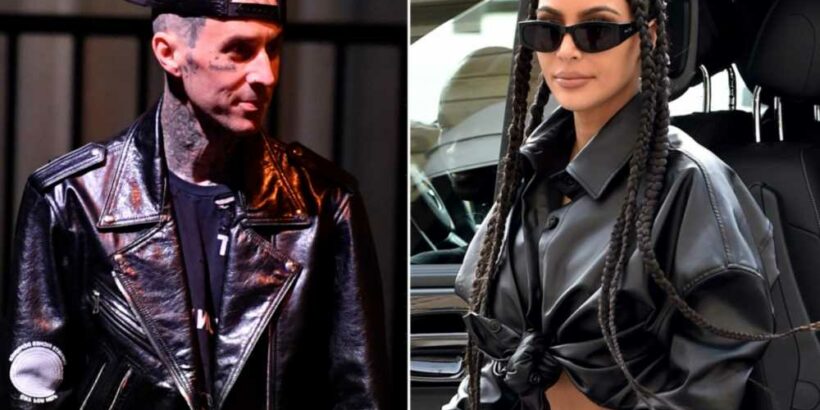 Kim Kardashian denied the rumors that she hooked up with Blink-182 drummer Travis Barker on Instagram Tuesday.

“Getting my nails done right now and I have time today,” the 40-year-old multi-hyphenate wrote via her Instagram Stories Wednesday evening, closing with “ask me anything…”

Naturally, a fan asked her whether she and Blink-182 drummer Travis Barker had ever hooked up, an assertion that Barker’s ex Shanna Moakler made and blamed for the dissolution of her and Barker’s marriage. Aubrey O’Day, of all people, added fuel to the fire with a recently-surfaced quote from her own Instagram from July 2020.

“NO!” Kardashian wrote in response. “False narrative! We’ve been friends for years and I’m so happy for him and Kourt.”

Barker is of course dating Kim’s older sister Kourtney, whom he has called the “love of his life.” 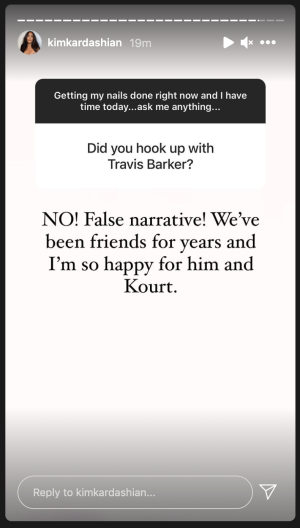 Not helping things is Barker’s record of admiring Kim in print and interviews. He denied having any romantic relationship with her in his 2015 book, “Can I Say: Living Large, Cheating Death, and Drums, Drums, Drums,” but admitted to “secretly checking” her out while he was spending time with her best pal Paris Hilton.

Then, in an interview with Us Weekly promoting the book, he added, “How could you not stare at Kim? Mind you, I enjoyed hanging out with Paris, but I love curvy girls. Kim was eye candy. I was in no way disrespectful to Paris, but I couldn’t keep my eyes off Kim.”

Moakler, 46, claimed recently that charges from her and Barker’s children — Landon, 17, and Alabama, 15 — that she’s been an absentee mother didn’t start until “my ex started dating a certain person.”

Asked if she had words for Kourtney and Kim, Moakler replied, “Thanks for destroying my family… twice.”

Meanwhile, O’Day’s Instagram post from last July asserted, “I was ‘bffs’ with Kim Kardashian during a fourth [of July]. She was hooking up with Travis Barker and we were at his house … he was really dope.”

Barker and Kourtney have had quite the whirlwind romance this year, going public on Valentine’s Day and subsequently taking blended-family trips to Disneyland and engaging in various forms of PDA.