WASHINGTON — At a ceremony celebrating the Hindu festival of lights Tuesday, President Trump had no comment on reports that he plans to remove Kirstjen Nielsen as secretary of homeland security.

Sources familiar with the matter tell CBS News Nielsen will be leaving, but say the timing is uncertain. Just last month, Mr. Trump praised her response to devastating hurricanes, and she has been a vocal advocate for the president’s policies, including immigration.

But sources say she could fall victim to the president’s frustration that his immigration agenda has stalled. 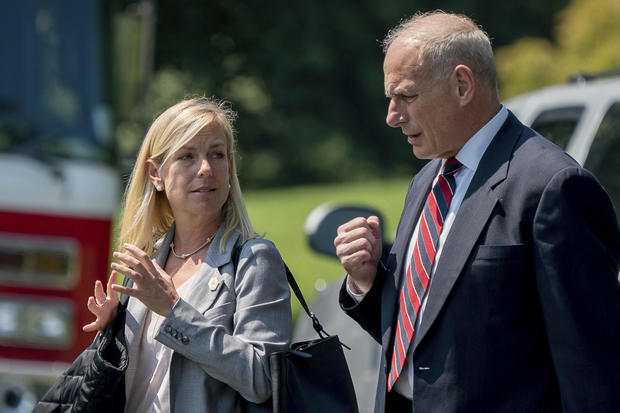 If Nielsen is forced out, it could lead to yet another clash between the president and chief of staff John Kelly, who is Nielsen’s strongest supporter in the White House. Sources say her firing could result in Kelly’s departure.

If Kelly were to leave, sources say the president has been advised to bring in someone with more political experience in preparation for the 2020 re-election campaign, like Nick Ayers, chief of staff to Vice President Mike Pence.

“Why do they remain anonymous? Could it be that it’s not completely verified and true?” she said.

First lady Melania Trump made her own personnel recommendation, saying she was unhappy with the deputy national security advisor, Mira Ricardel, who traveled with her to Africa last month.

Mr. Trump said Ricardel — seen Tuesday afternoon standing behind the president — was involved in disagreements over seating on the plane and other logistics.

In a rare public rebuke, the first lady’s office said Ricardel “no longer deserves the honor of serving in this White House.”  Mrs. Trump shared these views directly with her husband, but Ricardel is still in her job.