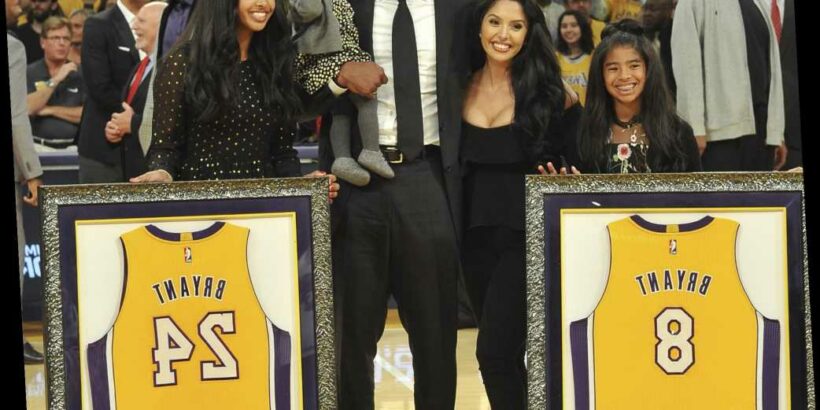 Kobe Bryant’s wife Vanessa and daughters Gianna, Natalia and Bianka joined him for his jersey retirement ceremony at a Los Angeles Lakers game on Dec. 18, 2017. That spring, Vanessa and their older daughters, Natalia and Gianna, joined Dad on the red carpet of the Tribeca Film Festival in N.Y.C. Bryant gave Gianna a lift as they watched a match between the U.S. and China women’s soccer teams in San Diego. Dad had an arm around each of his older daughters at a 2017 Los Angeles Sparks WNBA game. Dad held on tight to Bianka during a family vacation in 2018. Bryant pulled the ultimate cool dad card in 2018 when he brought his wife and daughters to meet Oprah. He held on to Gianna in 2018 during the Phillips 66 National Swimming Championships at the Woollett Aquatics Center in Irvine, California. Bryant, Vanessa, Natalia and Gianna got all dressed up in 2018 for the premiere of Disney’s A Wrinkle in Time. Following his retirement, he brought Gianna, also a budding athlete, to a game between the Lakers and Atlanta Hawks in L.A. The family had lots to celebrate in the spring of 2019 ahead of the arrival of their fourth child, daughter Capri, who arrived in June. Capri even joined in the family’s epic group Wizard of Oz costume on Halloween 2019. In one of their last public photos together before they both tragically died in a helicopter crash on Jan. 26, 2020, Bryant gave Gianna a squeeze as they sat courtside at a December 2019 Lakers game.