#GoodbyeHaters? Kyle Richards clarified her intent behind the #GoodbyeKyle challenge amid backlash from Real Housewives of Beverly Hills fans — and Lisa Vanderpump supporters.

“As most of you know, last week’s episode of RHOBH was a difficult one,” Kyle, 50, began in a series of messages shared on her Instagram Story on Sunday, April 7. “When I went to Lisa’s House to talk to her, I knew it would not be easy but felt I had to be honest after the conversation that had taken place between the other women and me earlier. I didn’t expect to be having a conversation with both Lisa and Ken.”

Kyle and Lisa went head to head during the Tuesday, April 2, episode of the Bravo series after the former American Woman producer asked the SUR owner if she sold the story about Dorit Kemsley’s dog ending up a kill shelter to the tabloids. As the conversation got heated, Lisa’s husband, Ken Todd, stepped in and kicked Kyle out of their home. 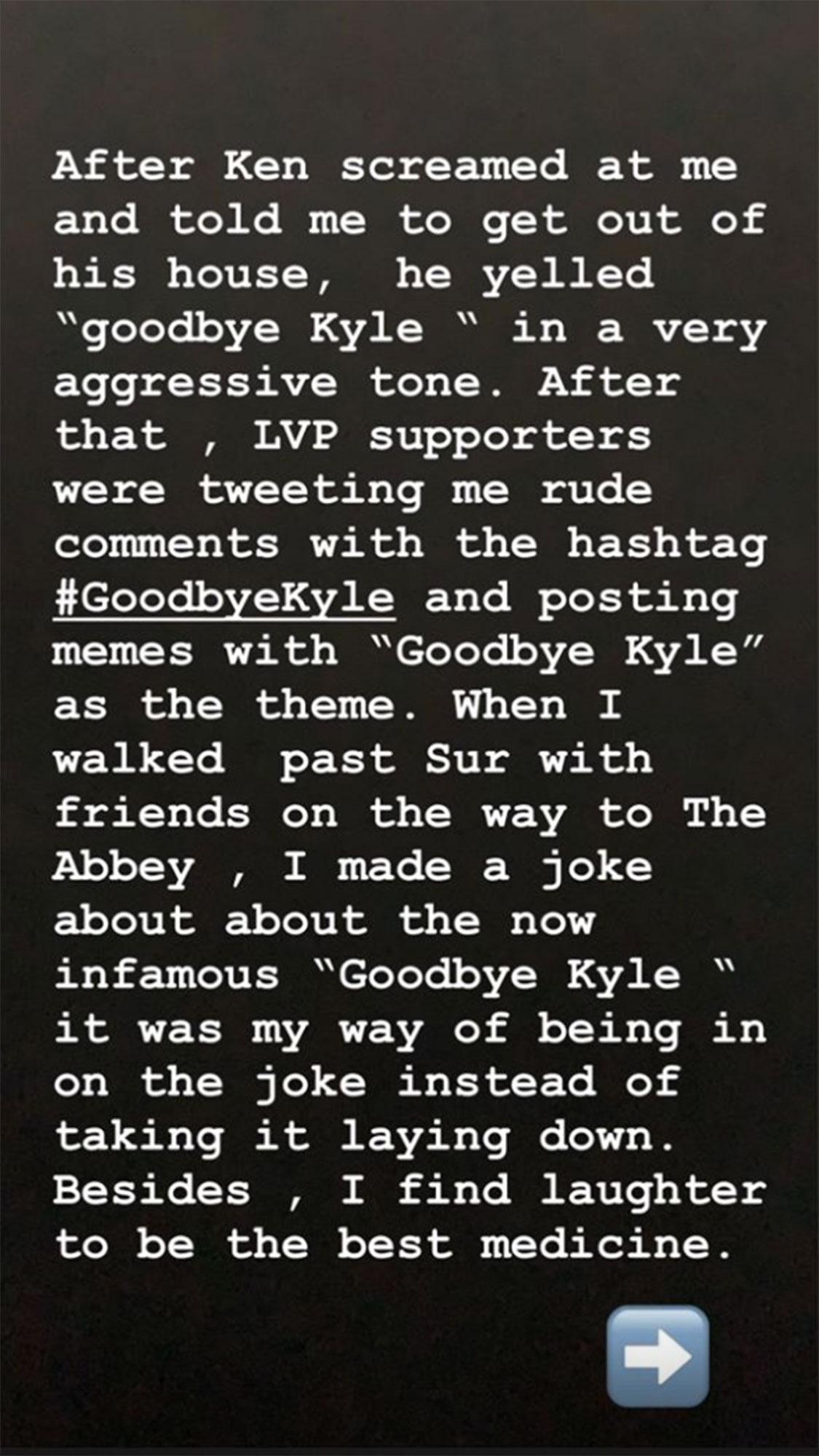 “After Ken screamed at me and told me to get out of his house, he yelled ‘goodbye Kyle’ in a very aggressive tone,” Kyle wrote on Sunday. “After that, LVP supporters were tweeting me rude comments with the hashtag #GoodbyeKyle and posting memes with ‘Goodbye Kyle’ as the theme. When I walked past SUR with friends on the way to The Abbey, I made a joke about the now infamous ‘Goodbye Kyle.’”

Kyle made headlines on Friday, April 5, after she yelled, “Goodbye Kyle,” outside of Lisa’s West Hollywood hotspot. The new catchphrase made waves over the weekend as fellow RHOBH stars Erika Jayne, Teddi Mellencamp and Lisa Rinna posted their own videos screaming the now-infamous quote. On Sunday, the former child star called the challenge her “way of being in on the joke instead of taking it laying down.”

“I have now read comments saying I was doing that to be mean because I want Lisa off the show. That is not true at all,” Kyle wrote. “Lisa and I have had arguments in the past and never at any point did I want to do the show without Lisa. This argument took place 7 months ago. Personally, I would think they would prefer me making a joke about it rather than making a big deal about a man getting up in my face.”

She concluded: “I have not taken that route intentionally as regardless of what happened between Lisa, Ken and me, I do care about them.”

Lisa, for her part, tweeted after the episode aired that she was “not proud” of losing her temper during the fight.

“I was probably still overly emotional,was the day before my birthday and life was challenging,” she posted on April 3. “Not proud of yelling .. But thank @kentoddbh.”

The Real Housewives of Beverly Hills airs on Bravo Tuesdays at 9 p.m. ET.