Kylie Jenner and Travis Scott had a date night at the 2018 Met Gala.

The Keeping Up With the Kardashians star and her rapper beau hit the red carpet together at fashion’s biggest event of the year on Monday in New York City. The couple left baby Stormi Webster at home for the evening while they attended their first major event since becoming parents.

“Parents’ night out,” Kylie told Vogue on the red carpet, adding that it’s their “first real party” since welcoming baby Stormi back in February.

For the fashion event, the couple was dressed in designs by Alexander Wang. 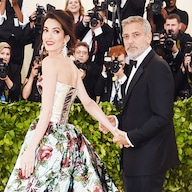 “We wanted to go with something more simple, edgy, young, so that’s exactly what we did,” Kylie dished about her mermaid-inspired dress.

The E! star also shared that she hoped to recreate her epic 2017 Met Gala bathroom selfie at Monday’s event, and said she just wanted to “have fun” alongside her squad. Kylie’s mom, Kris Jenner, as well as sisters Kendall Jenner and Kim Kardashian were also in attendance at the annual Metropolitan Museum of Art event.

While the parents were without their baby girl on Monday night, they were recently away on vacation with Stormi. To celebrate Travis’ birthday last week, the trio went on a beach getaway together.

While on the vacation with her parents, Stormi celebrated a major milestone.

“My pretty girl is 3 months old today,” Kylie captioned an adorable snap of her baby girl on May 1.

Watch the video above to see Kylie and Travis talk more about their parents’ night out!