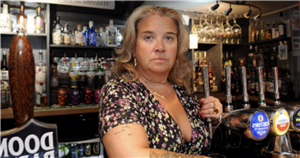 A landlady has been left with no option other than to close down her pub as her energy bills have doubled to an unbelievable £112,000 a year.

Miranda Richardson, 48, has run the Live and Let Live pub in Harpole, Northamptonshire, for four years but the cost of living crisis has led her to throwing in the towel.

She will soon be pulling pints for the last time as her bills have more than doubled, and she simply can't keep up with the rising costs.

The situation has left Miranda finding the pub virtually impossible to run and, even though it managed to fight through the coronavirus pandemic, it's simply not getting enough trade to justify keeping up the fight.

The landlady calculated that she'd need to sell around 1,400 pints a week to simply break even, and the chances of her pulling this off are slim as the boozer currently pulls between 400 and 500 pints during a good week.

She told LadBible: "If I’m honest at the moment I’m just about functioning. I love doing what I do but I can’t sustain it.

"I have worked as hard as I can possibly can. I will keep going until I shut the door. I do get upset about it and I do get sad but I didn't do it, this is not on me and that's the only way I can cope."

Miranda runs the Live and Let Live, and also has six bar staff as well as a full-time chef but at the moment it's costing her £5,000 a week "just to open the doors."

She also said she's noticed the costs have been creeping up each month this year.

Miranda explained that to keep the doors open each week in January alone it set her back around £2,700, and this figure jumped up to £3,800 by March.

What's an already troubling situation will only be made more problematic in October when energy bills are set to rise again, which will put extra stress on people's wallets.

The landlady said she can totally relate to why the village can't afford to come together to keep the boozer's doors open, as everyone is being hit by the rising cost of living.

Miranda continued: "Everybody's home bills have gone up so when you're making that choice about going out, of course you don't."

She did query why more hasn't been down to prevent energy companies "making major profits left, right and centre."

The landlady also expressed sympathy to other business-owners who could end up being "bankrupt by the end of the year" and said it's "really sad" to see so many businesses having to think about shutting up shop because of the situation.

The Live and Let Live pub, which is owned by the Stonegate Group, will shut its doors on July 21.