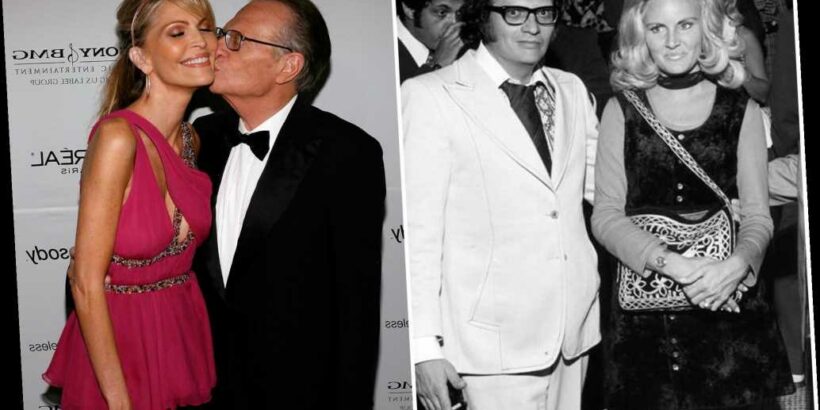 ‘They’re gonna have to carry me out’: Nothing could keep Larry King away from TV

Larry King, who died Saturday at the age of 87, was known almost as much for his multiple marriages and divorces as he was for being an icon of broadcasting. He was married eight times to seven different women. He was only 18 the first time. One was a math teacher, another a Playboy bunny. He once said he never cheated on any of them, though some of his exes disagreed — and at least one stepped out on him several times herself.

King’s longest marriage was also his last — and the only one that lasted. Though King filed for divorce from Southwick, 61, in 2019, they were reportedly still married at the time of King’s death. They have two sons, Chance, 21, and Cannon, 20.

The two married in a hospital room in 1997 just before he underwent surgery to clear a blocked blood vessel. Southwick, a show biz vet with a background in acting and singing on TV shows in the 1970s and ’80s, was the daughter of a longtime music manager.

Though the marriage was rocky, due in part to their 26-year age difference and Southwick’s rumored infidelity (including a reported dalliance with her son’s baseball coach), Southwick appeared devastated when she learned King had filed for divorce. “I was crushed, I had no idea that this was coming, it hurt yeah. I was totally blindsided.”

King met businesswoman Julie Alexander and fell head over heels. He married her later that year in Washington, D.C. But it was over almost as fast as it began. They separated in 1990 and divorced two years later. Alexander told “Inside Edition” in 2010 that she suspected King had cheated on her.

Lepore, a former math teacher and TV production assistant, was among King’s lowest-profile wives. It was King’s second-longest marriage but also the most private. They were both mum on why they divorced.

The two reportedly met while working at a radio station in Miami and had a daughter, Kelly, who apparently was adopted by Sutphin’s second husband.

A former Playboy Bunny, Akins married King twice — with his marriage to Mickey Sutphin in between. They had a daughter, Chaia, and King adopted her son, Andy. Akins died in 2017, and King called her a “grand lady” in a tweet. Both Chaia, then 51, and Andy, then 65, died in 2020. Chaia died from lung cancer and Andy from a heart attack.

Their marriage lasted just one year but produced a son, Larry Jr., now 59. Larry King Jr. was in his 30s when he met his father. Kaye told King about their shared child in 1994 when she was dying of lung cancer.

King married his high school sweetheart Freda Miller when he was only 18. The marriage was annulled, apparently at her parents’ request because they did not approve of the union.