Victorians are being encouraged to demand compensation from the state government over the cost of sweeping restrictions on the community, in a move to force officials to decide the claims.

Concerned at a state bid to extend emergency powers, Victorian Liberal senator Sarah Henderson is calling on people to use state law to seek financial redress if they have lost work from the curbs imposed to counter the coronavirus. 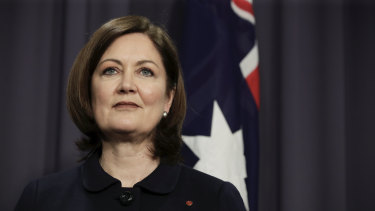 Liberal senator Sarah Henderson based her call on a provision of the Public Health and Wellbeing Act that allows people to seek redress for decisions by Victoria’s Chief Health Officer, Brett Sutton.Credit:Alex Ellinghausen

The move is aimed at forcing Premier Daniel Andrews to scale back the restrictions as quickly as possible without endangering public health, as the Liberals blame his controls for driving 400,000 people out of work.

Senator Henderson based her call on a provision of the Public Health and Wellbeing Act that allows people to seek redress for decisions by Chief Health Officer Brett Sutton.

"This provides, potentially, thousands of Victorians with the right to seek compensation including those who have lost their jobs or been forced to close businesses," she said.

"Victorians have a voice. Restrictions should only be imposed insofar as they are absolutely necessary."

Section 204 of the state law says a person who suffers loss as a result of a decision by the chief health officer can seek redress to the secretary of the Department of Health and Human Services.

The secretary, Kym Peake, can award compensation if she considers there were insufficient grounds for Dr Sutton's authorisation, an unlikely scenario given the statewide controls.

But people can appeal against the secretary's decision at the Victorian Civil and Administrative Tribunal, raising the prospect of a flood of claims.

Mr Andrews urged Victorians to accept the need for controls to prevent the spread of COVID-19 and save lives, saying he wanted to remove the restrictions as fast as he safely could.

The founder of Jim's Mowing, Jim Penman, backed the idea of using the law after he encouraged his franchisees to keep operating earlier this month despite the Victorian shutdowns.

"The damage the Premier's done with this arbitrary shutting down is just appalling and there's no benefit to the public," he told the Nine Network.

Mr Penman said there were 4000 gardening contractors across the state and he encouraged them to lodge claims with the DHHS, although he would not make a claim himself.

"I hope we'll have thousands – we'll do everything we can to get every independent contractor in the state in a relevant industry. "We're talking about tens of thousands of people, potentially."

Mr Penman said he did not doubt the need for restrictions and supported the curbs on major sporting events and other controls but he objected to rules that stopped small contractors doing their work.

Mr Penman came under fire earlier this month for telling franchisees he would pay their fines if they flouted the rules, prompting Victoria Police chief commissioner Shane Patton to say it was "disappointing" to hear someone encourage that behaviour.