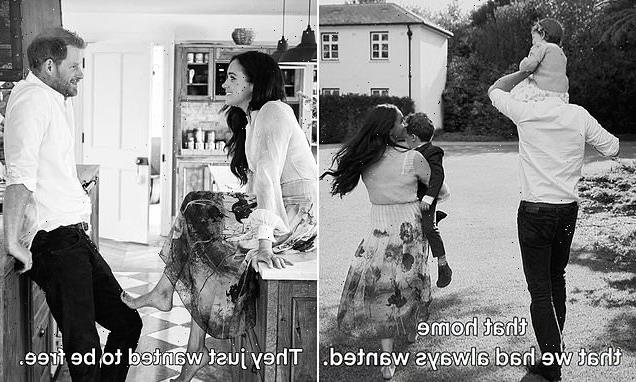 Prince Harry and Meghan Markle posed for photographs in their garden of their Frogmore Cottage home with their children as they spent time in Britain for the Queen’s Jubilee, it has been revealed today.

The Duke and Duchess of Sussex, 41, who are currently living in their $14 million mansion in California, shared two new photographs at their English base in the latest trailer for the second part of their Netflix series this morning.

The images appear to have been taken during Lilibet’s one and only visit to the UK, when the family spent a brief weekend in London for the Queen’s Jubilee in May.

At the time, the couple left the Platinum Jubilee celebrations early – missing the Pageant and the Queen on the balcony – but apparently found time for the family photoshoot, which they revealed today. 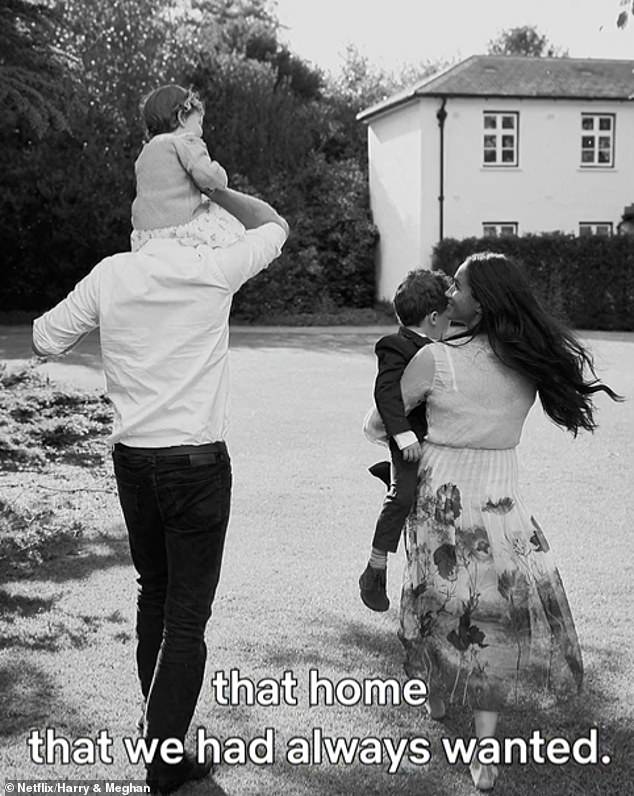 Prince Harry and Meghan Markle posed for photographs in their garden of their Frogmore Cottage home with their children as they spent time in Britain for the Queen’s Jubilee, it has been revealed today

In one of the photographs, Meghan and Harry can be seen walking through their garden at Frogmore.

The Duke can be seen carrying his daughter Lilibet on his shoulders while the Duchess carries their son Archie in her arms.

Both children appear to be dressed formally for the occasion – with Lilibet wearing a dress, cardigan and a bow hairband.

Meanwhile Archie is dressed in a white shirt and jacket. 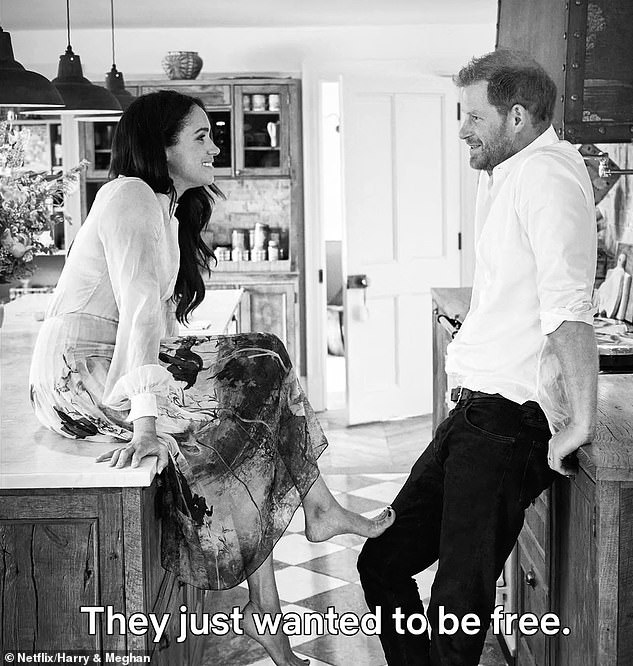 The images appear to have been taken during Lilibet’s one and only visit to the UK, when the family spent a brief weekend in London for the Queen’s Jubilee in May

While the photographs shared today were not dated, the only time that Lilibet has been in the UK was during the Queen’s Jubilee earlier this summer.

At the time, the couple didn’t attend all the royal celebrations.

The Sussexes land in Britain on a private jet. The Queen sent three of her own protection officers, her royal Land Rover and a bullet-proof VW people carrier to meet the family at Farnborough Airport, taking them to Frogmore Cottage.

A Range Rover with a modest escort swept them in to Central London and onto Whitehall, where they took up position in the Major General’s Office overlooking the parade ground ready for the other royals to arrive.

Among the first to greet them were Princess Beatrice and her husband, Edo, as well as the queen’s grandson Peter Phillips.

Meghan, wearing a large wide-brimmed navy and white hat, put her finger mysteriously to her lips as the girls mimicked her, laughing.

Her husband, Prince Harry, 37, who looked tanned in a lounge suit rather than military uniform, was also seen later entering into the spirit of things, apparently urging Lena to ‘shush’.

The couple were later seen chatting to the Queen’s cousin, the Duke of Kent, 86, before he left the family gathering to join the monarch at Buckingham Palace, where they took the returning military salute together.

The couple went to St Paul’s Cathedral for the morning’s service celebrating the Queen.

The couple arrived after the Earl and Countess of Wessex, and their two children, and Princesses Beatrice and Eugenie along with their husbands.

Harry and Meghan held hands and were smiling broadly as they walked up the steps of the cathedral, while cheers and some boos could be heard from the crowd.

The Duke of Cambridge and his wife Kate sat on the front row alongside Prince Charles and Camilla, who were representing the absent Queen at the Service of Thanksgiving for her 70-year reign.

But Harry and Meghan were placed on the opposite side of the aisle, half-way down a second row of seats, along with other lower-ranking, non-working royals.

There was no chance for the once-close siblings to talk as William, 39, and Kate, 40, were part of the main party.

They arrived after Harry, 37, and Meghan, 40, were seated and left before them in order to attend a post-service reception at the nearby Guildhall.

Notably, the California-based Sussexes were the only members of the extensive royal party who were absent from the second event.

Instead of attending the concert at Buckingham Palace, Harry and Meghan celebrated their daughter Lilibet’s first birthday in Windsor on Saturday with a ‘relaxed’ birthday party —with royal second cousins invited to the festivities.

The little girl’s birthday party was open to Zara and Mike Tindall’s three children, Mia, eight, Lena, three, and Lucas, one, as well as Savannah, 11, and Isla, 10, daughters of Peter Phillips and Autumn Kelly.

The Queen was also rumoured to have been invited – but it is claimed that she met her great-granddaughter for the first time on Thursday or Friday.

The Duke and Duchess and their children reportedly flew out of Farnborough Airport at 1.30pm, an hour before the Jubilee Pageant began.

The California-based couple are believed to have been driven from Frogmore Cottage in Windsor, where they were staying, at lunchtime.

They landed in the US at around 5pm, LA time.

Meghan is dressed in a flowing dress, which features a stunning floral print across the hemline, and walking barefoot in the image.

In the second photograph, the couple can be seen relaxing in their kitchen together.

During their visit to mark Her Majesty’s 70 year reign, the Duke and Duchess of Sussex were seen rarely – once was at the Trooping of the Colour and another time at St Paul’s Thanksgiving Service – and had no official role during the festivities.

However it was understood at the time that Harry and Meghan hosted a ‘relaxed’ garden party on Saturday for little Lilibet, one, in the Windsor estate with birthday cake, balloons, party games and picnic snacks.

At the time, the couple shared a number of images from the weekend with royal fans, revealing Lilibet’s face for the first time.

While it is not known who took the photos of the family, the original Lilibet picture was taken by photographer and friend of the couple Misan Harriman.

He attended the small picnic with his wife, children and reportedly members of the Royal family.

Those who are said to have also been at Frogmore Cottage include Zara and Mike Tindall’s three children, Mia, eight, Lena, three, and Lucas, one, as well as Savannah, 11, and Isla, 10, daughters of Peter Phillips and Autumn Kelly.

Three-year-old Archie’s godfather, Charlie Van Straubenzee, and his brother Tom, godfather to Princess Charlotte, were also invited, it is understood.

Photographer Mr Harriman wrote on her Twitter: ‘It was such a privilege to celebrate the first birthday of Lilibet with my family and hers! Joy and face painting all around.’

Twitter royal commentator and friend of the Sussexes Omid Scobie said the couple invited close friends and family for an ‘intimate backyard picnic’ as he posted the picture.

Mr Scobie added that Harry and Meghan’s wedding baker Claire Ptak made a special order for the party.

And was told by a spokesperson for the couple that they ‘remain incredibly touched by the countless birthday wishes for their daughter’ and have also been ‘amazed’ to learn that $100K (£79,000) was donated in Lilibet’s honour.

The funds went to World Central Kitchen, a not-for-profit organisation partnered with the couple’s Archewell foundation, according to a spokesperson for the Sussexes.

The organisation has provided support in Uvalde, Texas and Ukraine, the spokesperson said.

A spokesperson for the couple did not name specific family members who attended the event.

A source spoke to The Sun, about the party, saying: ‘It was a lovely do and had everything you’d expect from a child’s birthday party.

‘The idea was for it to be very relaxed and casual, with people free to pop in and out as they wished.’

They said that it was a ‘nice opportunity’ for some of the royal children to meet little Lilibet, with this trip being her first time in the UK.

They added that ‘lots of discussion’ had been had about the best gifts for the ‘milestone’ birthday, with a ‘£75 pink Volkswagen Beetle ride-on toy’ proving a popular idea.

It’s unclear whether the Duke and Duchess of Cambridge, or Prince Charles were able to attend Lilbet’s birthday in Windsor but were reportedly not there.

However, the Queen, Prince Charles and Camilla, Kate Middleton and Prince William shared their greetings on social media at the exact same time.

The words posted on the Prince of Wales and Duchess of Cornwall’s social media read: ‘Wishing Lilibet a very happy 1st birthday today’ along with a cake emoji.

It is also very likely that Prince Charles met his grandchildren. It is understood that he and Camilla met Harry and Meghan privately.

At the time, a royal expert said Harry had showed ‘incredible cheek’ if he asked his grandmother to pose for an official photo with Lilibet in the midst of her four-day Platinum Jubilee and continuing problems with her health.

The Sussexes reportedly wanted their own photographer to capture the Monarch meeting her great-granddaughter Lilibet at Windsor for the first time, but a source claimed they were told ‘no chance’ because it was a private moment.

Angela Levin’s biographer, told MailOnline: ‘It is an incredible cheek. It is too incredible for words to have put pressure on his grandmother when she’s struggling to move during four days of celebrations where huge demands are being put on her. It’s even more of a strain when you are 96-years-old. The Jubilee is her last efforts as monarch, and yet Harry asks for time with her when she can’t say no’.

Meghan, Duchess of Sussex and Prince Harry, Duke of Sussex attend the National Service of Thanksgiving at St Paul’s Cathedral on Friday, 3 June

Ms Levin said: ‘They should have stayed for a few days afterwards, spent time with the Queen after her duties had finished, tried to make things right with William. They would have had the time – but they chose to rush in and rush out’. She also suggested that Harry appeared to have ‘lost all respect for anybody now’, adding: ‘All his impatience and self destruction is visible. He can’t hide it’.

Elsewhere in the trailer today, Prince Harry astonishingly accused the Palace of ‘lying to protect my brother’ and claimed he and Meghan were the victims of ‘institutional gaslighting’ in his most incendiary attacks yet on the Royal Family.

Appearing on a new trailer for their Netflix series, Harry & Meghan, the Duchess of Sussex, 41, added: ‘I wasn’t being thrown to the wolves, I was being fed to the wolves’.

‘I wonder what would have happened to us if we hadn’t got out when we did,’ Harry says, before Meghan adds: ‘Our security was being pulled, everyone in the world knew where we were.’

‘I said, ”We need to get out of here”,’ Harry says, before the action cuts to a selfie video of the duke describing how he was on ‘the freedom flight’.

‘They were happy to lie to protect my brother, they were never willing to tell the truth to protect us,’ he adds.

The first three episodes of the Duke and Duchess of Sussexes’ Netflix documentary saw them discussing the ‘challenging’ first years of their marriage, including being hounded by the press and fleeing the UK after orchestrating Megxit.

A 40-second trailer, released yesterday, shows the Duke and Duchess of Sussex celebrating their wedding day in May 2018 – and discussing how much fun they had, although no members of the royal family appear in the clip.