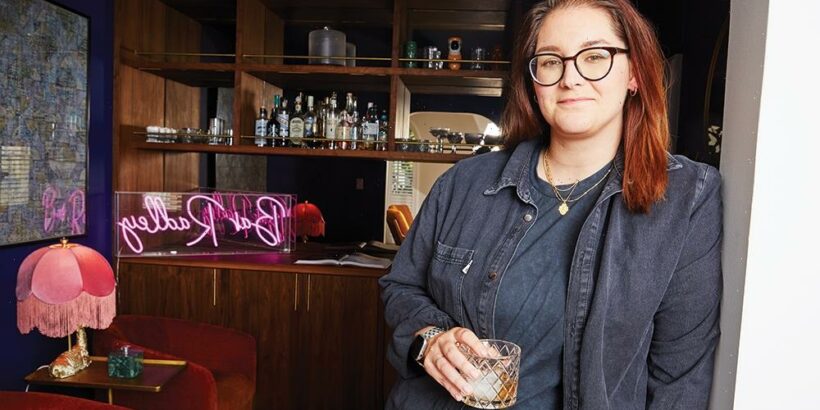 Over the past few years, Liz Hannah has worked very hard — so much so that her two series are Emmy contenders this year. She co-created Hulu’s “The Girl From Plainville” and served as executive producer on “The Dropout.”

“We moved here in January 2021, after being in a house where my husband [Brian Millikin] and I shared an office during the first year of the pandemic while I was running the room for ‘Plainville’ and he was developing two shows,” she says. “The small space was not really copacetic so now we each have our own office. There’s a door!”

While she writes, Hannah gets distracted if music or a television is playing.

“It leads to daydreaming, which leads to more procrastination. So, I tend to write in quiet but when I’m developing or thinking about what I’m going to do, I do a lot of pacing and my husband, also being a writer and producer, we ended up having sort of many writers’ rooms for the two of us.”

If she does need a change, there’s another room in the house that was used as an office by the previous owners.

“I got very into custom cocktails when the pandemic hit,” she says. “We built this bar that feels like an old smoking room. There’s a fireplace, it’s dark and homey, and our dog, who passed away, was named Boo Radley. So, we named the bar Bar Radley. We have an enormous bright pink neon sign in there that signifies that, and sometimes if I needed a change of scenery, or I just need to make a cocktail or think about things, I go in there and work instead of the office. It’s very dark and sometimes helps with the very dark things I’m writing — both the atmosphere and the liquor.”

In addition to the items below, Hannah also surrounds herself with books, including many about Nora Ephron, 1966’s “Hitchcock/Truffaut” and “Self-Evident Truths: 10,000 Portraits of Queer America,” by her friend iO Tillett Wright.

“I think it’s such an amazing representation of just how everyone is different, how we all are all unique and also similar. It’s just an exceptional book,” she says.

“This was my mom’s camera in the ’70s that she gave to me when I was in high school, and I still use it. I always bring a camera with me on set, and I tend to have a camera with me during the day. I document what it looks like from a different perspective. I used to put them into little books and give them to the cast and crew afterwards. I was pregnant and then had a baby during ‘Plainville,’ so I did not do that. But at some point, I’ll put it together — probably about the same time I send thank you cards for everybody who gave me gifts when my son was born.”

“Rebecca Jarvis, one of the executive producers of ‘The Dropout,’ who is one of the journalists who did the podcast, gave these to myself, [creator] Liz Meriwether and [producer] Liz Heldens during Christmas break when we were in the room. These just appeared in our office with our faces on Elizabeth Holmes’ body. Mine was, I think, we all found shockingly accurate and realistic! So that used to be in my husband’s office because I found it very strange to look at, but now I don’t see it as often because it’s behind my computer monitor. It’s right on my couch. It would be very strange if I was looking at it every day, but it was an amazing gift.”

“I went to AFI. I graduated in 2009, and the AFI Awards meant so much to me and mean so much to me. So being able to be recognized by that group and being able to participate in it was really a special moment for me. There’s an E.T. doll next to it that actually is a gift from my sister. There’s a lot of Amblin paraphernalia in my house. I always feel weird having worked with Steven [Spielberg] that my dog is named Jones and I have ‘Indiana Jones’ trading cards. So, the E.T. is like a nice little moment.”

“I’ve got a Golden Girl and Alex Trebek, two important pieces of my life. My husband and I watch ‘Jeopardy’ every night and we just recently went to New York and our DVR stopped working. We missed a week of ‘Jeopardy,’ and it was quite traumatic to our psyches. I’m originally from New York, and next to [the dolls], there’s a pigeon feather in a bottle that my mom gave me when I moved from New York to L.A. that has where the pigeon feather fell and [it’s] from Brooklyn, from where I lived, which is always a nice little reminder. Behind them is the Declaration of Independence and Constitution. It is a little book that Tom Hanks gave me after I met him the first time. He hands it out in his office. I was like, this is an epic giveaway.”

“This was a gift from my agent Kia, and it’s called a hokema. It’s a music piece of some sort. I’m a very nervous writer, like a hand-twitcher person. You can touch the metal tabs and there’s a very soothing sound that comes out. I actually find it better than a fidget spinner. It calms me a little bit; I also appreciate that my agent knows me well enough that they knew I needed something like this on my desk to calm myself during the day. It’s also a beautiful piece to have there.”