Should smoking be BANNED outdoors? Loose Women’s Denise Welch says she wants to see an end to the ‘horrible habit’ and clashes with Colleen Nolan after telling her to quit

Loose Women’s Denise Welch has clashed with Coleen Nolan over smoking, after demanding she quits smoking and admitting she wants the ‘horrible’ habit to be banned outdoors.

Amid a debate about whether the habit should be allowed outdoors, Denise, 62, from Tynemouth said that after quitting smoking seven-years ago, she can’t walk past a group of smokers without ‘feeling sick’.

She went on to tell host Coleen, 55, from Cheshire, that after ‘saying it for years’ now is the perfect opportunity to quit her vice, insisting that she ‘has to get her head around it and stop’.

Coleen replied that she ‘wasn’t ready’ to give the habit up, saying it feels unfair for smoking outdoors to be banned when there’s no such restriction on drinkers. 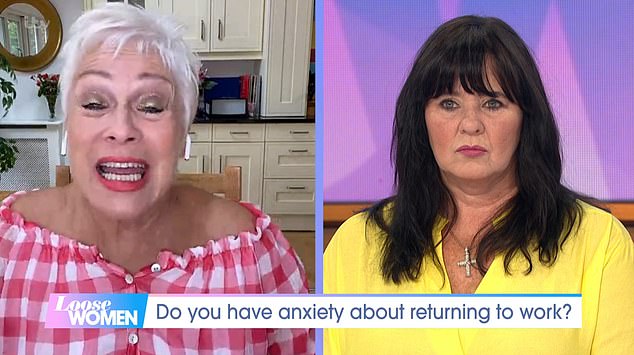 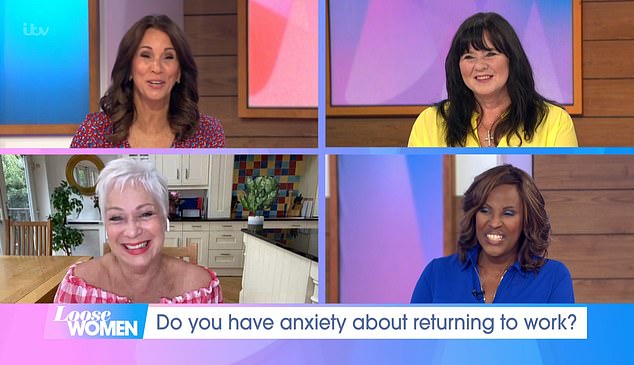 The comments came amid debate about whether the habit should be allowed outdoors, with fellow hosts Kéllé Bryan (bottom right) and Andrea McLean (top left)

When asked whether she felt the ban was a good idea, Coleen said: ‘To have taken that away from me [especially] yesterday, as a smoker, that would just finish me off.

‘If you don’t like it move away. And the amount of people when I say “I’m going for a fag” and they say “I’ll come too”…’

However Denise disagreed, insisting: ‘I smoked for years and gave up seven years ago, and now if I just walk past a group of people smoking the smell makes me feel sick. 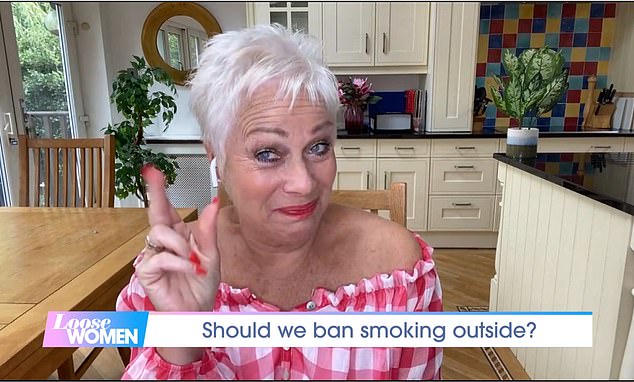 Denise, 62, from Tynemouth told that after quitting smoking seven-years ago, she can’t walk past a group of smokers without ‘feeling sick’ 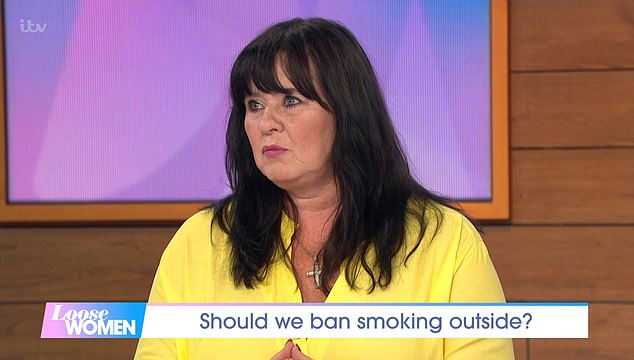 Coleen told that she ‘wasn’t ready’ to give the habit up, and felt the same way about those who drink heavily and feels it’s unfair for smoking outdoors to be banned

‘I think it’s horrible and Coleen this is your opportunity now, to stop. You have been saying it for years and you have to get your head around it and you have to stop.’

When quizzed by host Kéllé Bryan on whether walking past smokers makes her fear she’ll fall back into the habit, Denise went on: No, I just feel so much healthier and it’s mainly the smell of it.

‘I understand with the rules more people will be outside and if you have more people outside, it is annoying.’

Coleen went on to say that while she ‘admires’ Denise for giving up, she herself isnt ready to quit smoking. 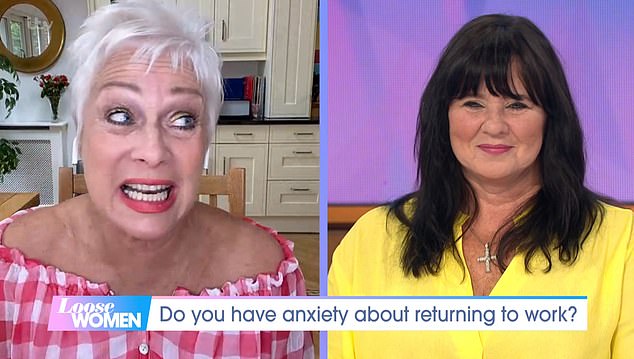 Denise told Coleen, 55, Cheshire, that after ‘saying it for years’ now was the perfect opportunity to quit her vice, insisting that she ‘has to get her head around it and stop’

She said: ‘It is annoying, I admire you, you’ve given it all up and you’ve been amazing and you look fabulous.

‘But here’s my thing, I’m not ready to give up yet to be honest. I don’t drink, it is kind of my only vice and I hate drinkers and when people say “ban smokers”, I want to ban drinks then. I hate being around drunks, that’s why I don’t go sit outside in a pub.’

Viewers clashed over the issue, with some feeling annoyance towards smokers is no different to disliking heavy drinking while others branded smokers ‘utterly disgusting’ and ‘selfish’.

Viewers clashed over the issue, with some feeling annoyance towards smokers is no different to disliking heavy drinking

‘If they’re going to ban smoking outside, then ban drink outside. Drunk people can’t social distance’, wrote one.

Another added: ‘ Get lost with second-hand smoke! Leave smokers alone. Drinkers are worse.’

Meanwhile, others lashed out: ‘TOTALLY ban smoking! Don’t project your bad habits on other people and get a healthy life, it KILLS YOU. It is UTTERLY DISGUSTING. Don’t be so selfish.’

Another said: ‘Coleen it’s all very well and good saying just don’t come out to the smoking area, but people congregate outside the entrance of the pubs/restaurants smoking so you can’t avoid it.’