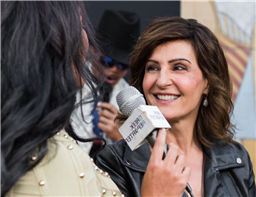 Moving in parallel with the recent upsurge of film production in Greece, the Los Angeles Greek Film Festival (LAGFF), an annual showcase for new works from Greek filmmakers worldwide, plans to expand its activities on an international scale.

The fest, now in its 17th year, is launching the Global Greek Film Initiative (GGFI), an umbrella program to advance cultural exchange between Greece, the U.S. and the Greek diaspora, provide opportunities for employment and economic growth within Greece, and serve as the North American hub for Greek film programs and initiatives.

Lia Bozonelis, a Greek-American writer-producer and LAGFF Board Member who conceived the idea of the year-round multifaceted program, said that “Greece is experiencing a hard-won opportunity with the amount of international production pouring in.”

One of the program’s goals is to promote Greece as an international production location. “Combining insights and evaluation from working within the studio system along with our organization’s mission and resources, we can help ensure that Greece remains a center for film production and a global base for fostering new talent,” Bozonelis added.

Bozonelis, LAGFF co-founder Ersi Danou, and festival director Aris Katapodis are cofounders of GGFI and serve as board members. They’ll be supported by a Council of Trustees and group of Dignitaries, comprised of organization donors and Hollywood professionals. These include Jim Gianopulos, who has served as studio head at 20th Century Fox as well as Paramount; writer-actress Nia Vardalos (“My Big Fat Greek Wedding”), who is pictured above; TV director-producer Greg Yaitanes (“House of the Dragon”); and European Parliament member and actor-writer Alexis Georgoulis (“The Durrells”).

“For long-term success, you need to adapt, change and be relevant every day,” Katopodis said. “Change is good. Casting a wider framework, GGFI represents the growing influence of the Hellenic Diaspora in Greece, especially at a time when Greece is becoming a major film production hub in Southern Europe.”

Added Panos Kouanis, president and CEO of Greece’s National Centre of Audiovisual Media and Communication, “in less than five years, Greece has become one of the top destinations for filming not only in Europe but also worldwide… In 2021, more than 10 high-budget productions were filmed in Greece – for Amazon, Netflix, Paramount, Apple TV+, Millennium Films – as a result of the very competitive investment incentive and tax incentive that is offered.”

“The sudden influx of American and international film production in Greece has caused the urgent need for a sustainable industry infrastructure and well-trained crews,” said Danou. “GGFI is here to help by coordinating efforts and offering workshops, training classes and scholarships. It will also strengthen our festival and expand to more programmatic avenues.”

Programs under the GGFI umbrella will include a crew training program for Greek professionals in entertainment, administered by American pros and technicians; strategies to facilitate Hollywood film production in Greece; and scholarships for Greek film students to attend LAGFF.

Also under the aegis of GGFI, LAGFF’s already established International Project Discovery Forum, an international screenplay development lab and pitching session, will expand to provide workshops in Greece administered by Americans in the industry. Additional offerings will include a series of online and in-person screenings and events focusing on such areas as faith and tradition, diversity, women’s empowerment and LGBTQAI+ causes.

Vardalos, a GGFI Dignitary and longtime supporter of LAGFF, shared her enthusiasm: “Having just wrapped an incredibly wonderful experience directing “My Big Fat Greek Wedding 3,” filmed entirely in Greece, I can unequivocally say, on your next film, go Greek!”

“As a citizen of Greece I have dreamed of shooting a series [there],” said Yaitanes. “Rich in texture and bathed in the most stunning light, the islands and the mainland offer endless backdrops to enrich our storytelling.”

The GGFI team is set to begin its new programs in early 2023.