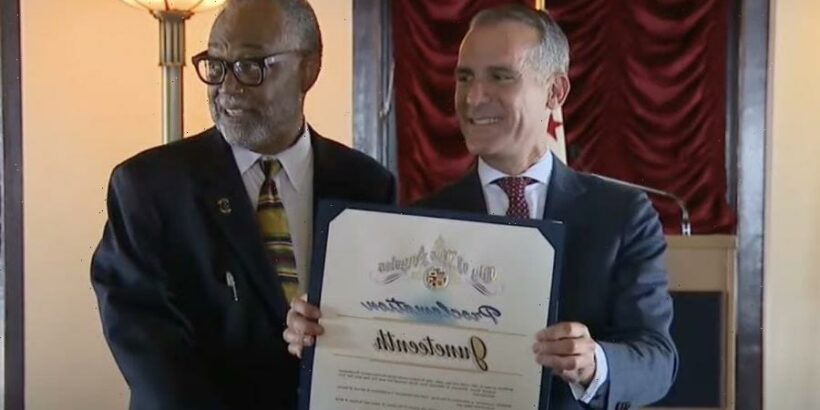 At the signing ceremony, which took place at City Hall, Mayor Garcetti said, “We need every Angeleno to learn the full story of our past, no matter the ugliness of some of its chapters, and that means recognizing the lasting legacy of slavery in our country.”

“We want every child to know what Juneteenth commemorates. The day—June 19, 1865—in which a Union general arrived in Galveston, Texas, to inform the last African Americans still held in bondage in this nation that they were free and the Civil War was over,” Mayor Garcetti continued.

African American Councilmember Curren Price, who introduced the legislation, said that proclaiming Juneteenth as a holiday “offers a sense of vindication…Juneteenth for the Black community serves as a brighter chapter. Our Freedom Day. Our true day of emancipation. This will now be a day of remembrance for our city.”

“Juneteenth addresses the end of nation’s darkest days by acknowledging the historical significance, and it offers a glimpse, a small glimpse, of vindication…This will now be a day of remembrance for our city,” said Councilmember Price. “At this time in our culture, we need to do everything in our power to educate one another about the things left out of the history books, and we have to demonstrate inclusion and celebrate our progress, keeping in mind that we still have a long way to go.”

While Juneteenth officially became a federal holiday last year after President Biden signed the bill into law, Black Americans have been celebrating this day since the late 19th century. “[I]n recent years, and particularly following nationwide protests over police brutality and the deaths of George Floyd, Breonna Taylor, Ahmaud Arbery and other Black Americans, there [has been] a renewed interest in the day that celebrates freedom,” the New York Times reports.

Duke University African-American studies scholar, Mark Anthony Neal has likened the racial awakening that our country has experienced to the post-Civil War era, saying “The stakes are a little different…I think Juneteenth feels a little different now…It’s an opportunity for folks to kind of catch their breath about what has been this incredible pace of change and shifting that we’ve seen.”

Since June 19 falls on a Sunday this year, the public holiday for Juneteenth will be the following day, on Monday, June 20, 2022.