Lothar Baumgarten, a conceptual artist who used photography, film, prints, storytelling, soundscapes and more to explore a wide range of subjects, most notably the collision of cultures threatening people like the Yanomami in the South American rain forest, died on Dec. 3 in Berlin. He was 74.

The Marian Goodman Gallery in New York, which represented him, announced his death without specifying a cause.

“The breadth of his work was really enormous,” Ms. Goodman said in a telephone interview.

In the late 1970s, Mr. Baumgarten spent months at a time on repeated occasions living with the Yanomami in a remote region on the border of Venezuela and Brazil, immersing himself in their way of life. His experiences formed the basis of numerous exhibitions for decades afterward, including, in 1993, “America: Invention,” in which he transformed the famed spiral at the Guggenheim Museum into a study of threatened and lost cultures. 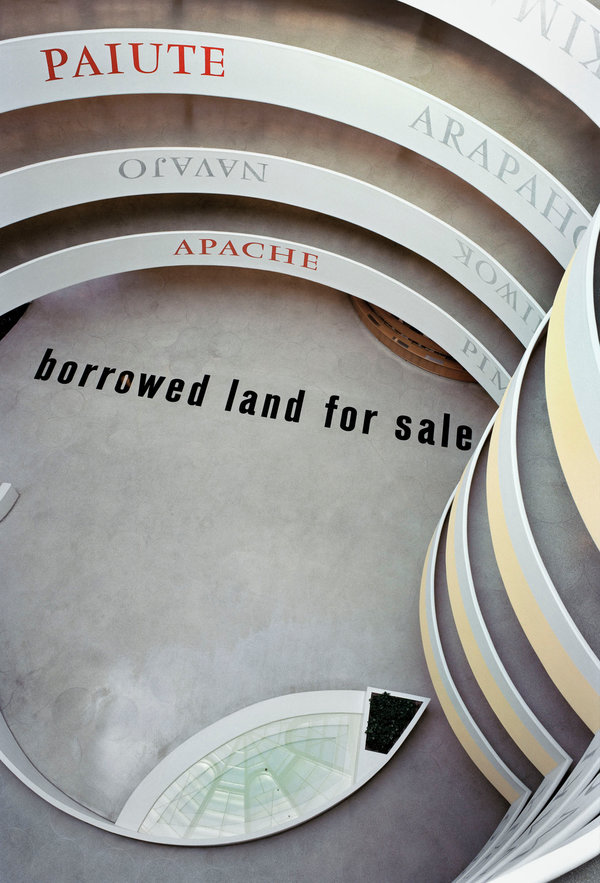 On the floor he emblazoned the words “Borrowed Land for Sale,” and up the spiral he displayed the names of North and South American tribes, some familiar, others a fading memory. The piece also incorporated adjectives associated with ethnographic displays of such peoples, like “lost” and “subtitled.”

The work, Roberta Smith wrote in a review in The New York Times, created “a kind of linguistic monument” to those tribes, with Mr. Baumgarten “transforming the spiral’s space into something akin to a giant word-map or an inside-out globe.”

But though he used the tools of ethnography, he did not view himself as merely documenting. As an artist, his journey did not really begin until he got home.

“That’s when I really saw,” he told The Times in 1988, when another installation based on his time with the Yanomami, “Terra Incognita,” was on display at the Goodman gallery, which showed his work for decades.

“You cannot reflect your own society unless you know a society that is remote from it,” he added. “To know that society, you don’t want to walk into it, get a Ph.D. and turn the page. You have to jump into the bushes, almost naked, as I did.”

Lothar Baumgarten was born on Oct. 5, 1944, in Rheinsberg, Germany. His father Kurt, was an anthropologist, and his mother, Johanna, was an executive secretary at a bank.

“When I was 5,” he told Mousse Magazine in 2016, “I found that I couldn’t express myself clearly enough verbally to my father. I said to him, ‘I’d like to give you a picture from what I see.’ ” So his father gave him an Agfa box camera.

He graduated from the State Academy of Fine Arts Karlsruhe in 1968, and from 1969 to 1971 he studied at the Academy of Arts in Düsseldorf, where his teachers included Joseph Beuys.

Mr. Baumgarten began making photographic studies of displays at ethnography museums throughout Europe. Then came his stay in the Amazon, which he drew upon for several exhibitions in the 1980s, including one for the 1984 Venice Biennale, in which he embedded the topography of the Amazon River system into the floor of the German Pavilion.

In the late 1960s or early ′70s, he had a serendipitous encounter that ultimately helped bring him to attention in the United States as well. Ms. Goodman and a colleague were participating in an art fair in Düsseldorf when the colleague became ill, leaving Ms. Goodman, who was then early in her career as a gallerist, with 40 pictures to hang. The colleague called a local gallery and asked the owner if someone was available to help.

“She sent over a young man, and he did a great job of hanging the work,” Ms. Goodman said. Only when he mentioned that he had a film showing nearby did she realize that he was an artist, not just a gallery assistant. It was, of course, Mr. Baumgarten, and she was soon presenting him in the United States.

His many exhibitions at the gallery included an installation in 1987 that focused on a hunting trip he had gone on while living with the Yanomami.

“What interests him is the space between him and them, between culture and nature, and between our civilization and theirs,” Michael Brenson wrote of that show in The Times. “By making an installation that can function as that space, he hopes to encourage a new tolerance and awareness of the “other.’ ”

Mr. Baumgarten was known for immersing himself in whatever subject he might tackle.

“He was very demanding of himself, that he did his best and understood the subject,” Ms. Goodman said. “He was always in for every project, all the way.”

For “Carbon,” an installation that examined American railroads and their role in opening up the West and disrupting Native American cultures, he rode the rails for four and a half months in 1989. His commitment of time and attention extended to individual elements of that work as well, like a photograph of cows in a field.

“It took me 20 minutes to establish communication with the cow in the middle,” Mr. Baumgarten told The Dallas Morning News in 2004 when “Carbon” was at the Dallas Museum of Art.

In 1999 he married Nobuko Sugai, who survives him, as does a son, Moritz.

One of Mr. Baumgarten’s more unusual works, presented at Marian Goodman in 2008, was “Matteawan/Fishkill Creek,” an 80-minute sound recording made one night at Denning’s Point on the Hudson River near Beacon, N.Y. That spit of land was once home to Indians and later the site of a brick works before the State of New York acquired it in 1988; hikers now encounter ruins from its industrial stage. Mr. Baumgarten sought to capture not just the sounds of the night, but the ghosts of the area’s past and the possibility of an ominous future.

“It is a variation on this warning — that we ignore the natural and our place within its order at the risk of great peril to ourselves and others,” Chris Wiley wrote in reviewing the work for Daylight Magazine in 2008. That warning, he added, “acts as subterranean thread connecting Baumgarten’s work, whether he is in the jungles of South America, the manicured parks of Europe, or the tangled woodlands of upstate New York.”

“If we listen closely to the sounds of Denning’s Point,” Mr. Wiley wrote, “we can hear echoes of the wild noises that will haunt our future ruins, unless we are careful.”