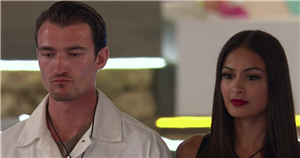 Love Island star Brett Staniland has revealed he asked show bosses to cut a conversation he was “adamant” he didn’t want shared with millions of viewers.

The 27-year-old had a relatively short stay in the villa when he coupled up with 23-year-old Priya Gopaldas who soon dumped him after he gave her the “ick”.

Despite being on the hit ITV2 show for less than a week, the PhD student and model took to his IGTV to have a candid discussion with his friend Chelsea McGehee about the realities of being subjected to the reality show’s spotlight.

During the conversation, Brett opened up about his mental health and admitted that being filmed and scrutinised 24/7 was something that took its toll on him.

He said: “I was going to speak to the psychiatrist and welfare team as regularly as I could. Even on good days and bad days just to like check in.”

After opening up about his mental health in the villa, Chelsea asked him: “Do you think they take into account what you say to the psychiatrist when it comes to editing?”

Though the model acknowledged that contestants were told to keep talk about production to a minimum, and that all conversation with the psychiatrist were confidential, he did contact the production team following something he had mentioned in the villa.

He said: “There was one thing that I was conscious of that I shared, and I literally went to see the psychiatrist and went to see production and I was like ‘I’m really adamant on this not being shown, please’.”

As a result, ITV ensured him that they would not air the scene or conversation in question, something which Brett praises the team for.

After production was scrutinised in 2018, Love Islanders are now cared for by mental health experts during and after their series, with support being on hand up to 14 months after leaving the show. “They did what they could. They were like ‘yeah, we’ve got the conversation, it’s not going to be aired, you’ve got nothing to worry about’ […] It gave me peace of mind,” Brett said.

During the conversation, Brett also revealed that being put in that situation in the first place has allowed him to understand himself better when it came to recognising his own boundaries.

He said: “I felt like I’d overshared and was really conscious of what I was saying to people – it was really personal about my life, and I just needed to speak to someone. They were great with me and helped me realise how I am with sharing stuff like that. So, it was good, they’re on hand all the time.”

Find out more of the latest Love Island gossip with the OK! newsletter in your inbox every day.