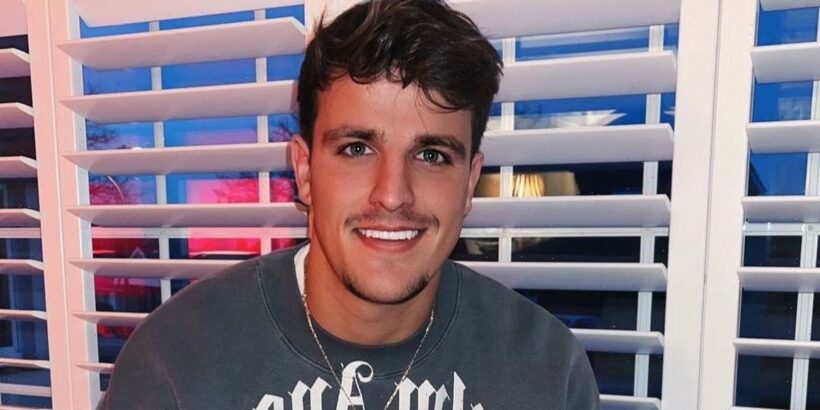 Hearts, souls and something else beginning with 'f' that we probably can't start an article with were fluttering at the sight of Love Island newbie Luca Bish.

The 23 year old Brighton boy was one of 11 fresh-faced singletons entering the villa during the Love Island launch on Monday, 6 June.

Thanks to a public vote, he found himself coupled up with Paige Thorne, a 24 year old paramedic from Swansea.

But that's not what got tongues wagging online after Luca made his grand, shirtless entrance.

Fans hopped straight to it with questions surrounding the fishmongers' many random tattoos; in particular, a 1995 above his navel… despite he himself being born in 1998.

Many Love Island viewers think the tats are similar to those of popstar Harry Styles, with one saying: "luca having half of harry styles’ tattoos is absolutely SENDING ME".

A second commented: "what in the harry styles is going on with luca’s tattoos".

Then again, Luca is taking it as a positive and says it's the "best thing I'll ever be compared to."

The management team behind Luca's Instagram account put one of the questions to bed as they confirmed: "Keep getting these messages so let's clear this up!

"He does in fact know when he was born – it's for his sister's year of birth".

Luca has previously explained the meaning behind his "random" tattoos in an interview with RadioTimes.com and other press.

He said: "My ex was a tattoo artist so I was a bit like her colouring-in book. I was going, 'Go on then.'

"They're just very random. I wouldn't say there's a lot of meaning for a lot of them but they're there now."

When asked whether there were any he didn't like, he said: "I don't like [my left] arm. This has got a lion on so people are comparing me to Harry Styles – I think nine times out of 10 people with tattoos have got a bloody lion on."

He continued: "[My right] arm I like a bit more. It's got Einstein, Amy Winehouse, Muhammad Ali, Winston Churchill.

"There's a bit more meaning there but all the others I'm a bit of a colouring-in book."

Luca says he decided to go on the hit dating show after seeing how many "genuine couples" the show has produced over the years.

He opened up about his reasons for going on for the show, saying: "When you actually look back at Love Island, you can see how many couples it’s genuinely made.

"I don’t know how many kids Love Island has made but there are a few aren’t there?"

He also revealed that he enjoyed being in a relationship, and said: "I came out of a four-year relationship about a year ago.

"I was enjoying being in a relationship, there were just things I didn’t like and we drifted apart." The young heartthrob was on the receiving end of some harsh words by the daughter of footballing legend Michael Owen in last night's opening show.

And fans were quick to jump to his defence online after Gemma Owen mocked his last name in a "rude" comment.

"I feel like that's a bit of an unfortunate last name… Bish?" the brunette remarked as others looked at her in shock. "Nah," she added after re-thinking whether she liked the surname. "Not feeling it".

For the latest Love Island gossip and spoilers, make sure to sign up to OK!'s daily celebrity newsletter and Factor 50 – your one stop for all the latest villa news.