Spoilers for Avengers: Infinity War ahead, obviously. With one snap of his giant purple fingers, Thanos obliterated half of the universe from existence… unless you’re watching Agents Of S.H.I.E.L.D. or Cloak & Dagger, of course. Those shows have remained untouched by the "Snapture," raising the question of whether Luke Cage Season 2 will be affected by Infinity War or not. The aforementioned ABC and Freeform shows have entirely skirted the events of the third Avengers film; but the Harlem hero’s sophomore outing will be the first of Netflix’s Marvel series to premiere in the wake of April’s record-breaking blockbuster. With a little more time having passed since then, will Luke Cage be the first Marvel Cinematic Universe TV show to properly address Infinity War?

If you’re hoping to see Thanos’ apocalypse play out in the streets of Harlem… well, then the Season 2 trailer might be a bit mystifying. There’s not one mention of the mad Titan, not one reference to the epic battles in New York and Wakanda, not one sight of a person dissolving into ash. In fact, the world seems to be running pretty much the same as it was before Infinity War, untouched by catastrophe (other than bulletproof mobsters, natch). So what gives? Will the season kick off with the snap, and the trailers are just cleverly hiding it? Will the snap occur halfway through as a major turning point in the season? Will it end in the snap, giving fans a grim cliffhanger?

The answer, frustratingly, is none of the above. But how exactly will Luke Cage manage to ignore Infinity War, you ask? Does it take place in a different branch of the multiverse, perhaps? Nothing so creative; in fact, the solution is so simple it feels like cheating. In a Reddit AMA earlier this month, Marvel TV head Jeph Loeb revealed how the MCU’s small screen offshoots would handle the events of Infinity War: "For the most part our stories will take place BEFORE Thanos clicked his fingers," he wrote. "A lot of that has to do with production and when we are telling our stories vs. when the movies come out."

This is the same strategy being utilized by the upcoming sequel Ant-Man And The Wasp, which will hit theaters more than two months after Infinity War, but will take place before the events of that film.

This decision, while probably disappointing for some fans, does make sense with some scrutiny. Although it seems like the Luke Cage team has had more time to reckon with the events of Infinity War than the writers of S.H.I.E.L.D. or Cloak & Dagger, the reality of the situation is exactly the opposite. S.H.I.E.L.D. Season 5 was still in production on its final episodes through mid-April, wrapping its shoot less than two weeks before the Infinity War premiere, as star Chloe Bennett revealed via Twitter — plenty of time for a memo from the higher-ups about the tragic way that movie would end, you would think. But Luke Cage Season 2 has actually been in the can much longer. 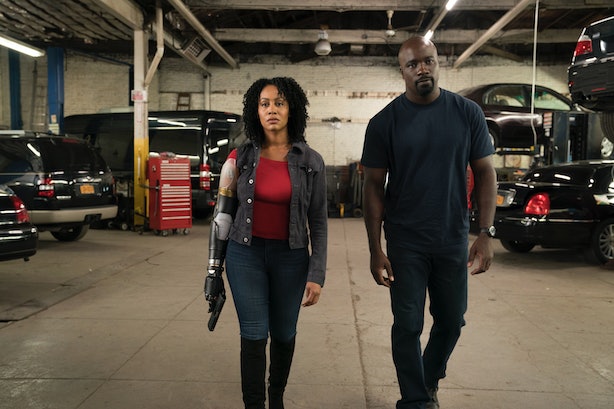 Filming for a season that’s released all at once has to be completed much farther in advance than a season that airs its episodes one week at a time; as such, production on the upcoming 13 episodes of Luke Cage actually wrapped seven months ago, way back in November of 2017, according to Comic Book Resources.. That was likely well before anyone not directly involved in Infinity War — even Luke Cage showrunner Cheo Hodari Coker — knew any details about that film’s cliffhanger. (Similarly, Iron Fist Season 2 started its production in December of 2017, as reported by Screen Geek, so don’t expect any Infinity War references in those episodes, either.)

In fact, given how far in advance these seasons are filmed, by the time any of Netflix’s Marvel shows could get around to addressing the events of Infinity War, it’s likely that the snap will have been undone by the events of Avengers 4 next summer — which means Marvel’s TV shows might get away with never having to tackle that apocalyptic plot point at all.