David Robertson’s six-year tenure as SSO Chief Conductor and Artistic Director, has been one renewal, growth and outstanding quality. To demonstrate the fine partnership he and the SSO have built, he left us with towering twentieth century works from either side of the Atlantic – Messiaen’s Turangalila-Symphonie (1948) and John Adams Harmonielehre (1985).

The Turangalila-Symphonie mixes modernism, intelligence, inventiveness and extravagant popular appeal in a way that recalls the hallmarks of Robertson’s own tenure. With brilliant young Malaysian pianist Tengku Irfan dispatching cascades of sparkling chords and smoothly collected keyboardist Jacob Abela (dressed as though auditioning for the next Doctor Who) playing Messiaen’s beloved ondes Martenot, it was a moment for joyous celebration of sound, imagination, artistic excess. 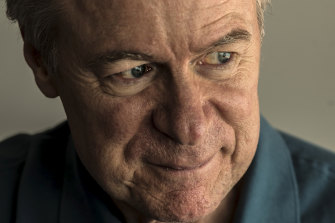 Conductor David Robertson has brought to an end his tenure as chief conductor.Credit:Steven Siewert

The first movement had austere grandeur, the fifth danced with ecstatic energy, the sixth conjured delicate shades of orchestral colour, and the tenth closed with rich complexity of gesture, texture and mood. Pierre Boulez, Messiaen’s student and Robertson’s friend and colleague derided the work’s “totally useless chords”, but for those who gave it a standing ovation they were useful enough.

Robertson spent a good deal of the second program, American Harmonies, beating out of time with the music, though this was due to high professionalism from conductor and orchestra rather than lack of it. The program of twentieth and twenty-first century American music highlighted challenging irregular rhythms and phased metres that blur the conventional bounds of musical time.

The Suite from Aaron Copland’s landmark ballet Appalachian Spring (1931) creates tension between Stravinskyan rhythmic invention and homely puritan simplicity. The beauty of this performance was the spiky buoyancy of the quicker movements, and radiant transparency of the slow opening and closing passages, like dawn and dusk.

The program’s most recent work, the Bassoon Concerto (2017) by Christopher Rouse, was the most conservative in style, adopting genial though not striking ideas, a balanced three-movement structure and skilful orchestration. Bassoonist Todd Gibson-Cornish played with precisely focused tonal edge and suave dexterity.

To finish the program and Robertson’s tenure, John Adams’ Harmonielehre put the phase-shifting hypnotic techniques of American minimalism to epic effect. The first movement alternates ominous and shimmering mesmeric moments, the second dwells on peaceful shifts of colour with delicate raindrop textures, while the third creates hypnotic tidal ebb and flow, as though pointing to patterns beyond the human.

Robertson has invigorated Sydney’s musical life with expert performances of new works, fresh perspectives on old ones and engaging musical enthusiasm. It has been hugely positive period for our orchestra and has laid propitious foundations for future growth.