A man who shed more than 300lbs (21st 6lbs) after becoming morbidly obese has had 13lbs of loose skin removed in a life-changing procedure.

At one point, John Allaire, 27, from San Diego was so morbidly obese he wore 8XL shirts and had to be weighed on a commercial scale at a fish market, as standard scales would not hold his weight.

John, who underwent skin removal surgery in March said: ‘It is a blessing to be able to move freely. There are just so many constant little things throughout the day that I think most people take for granted.’

After dropping the huge amount of weight by following a fitness programme in California, John started a GoFundMe to help pay for his excess skin surgery. 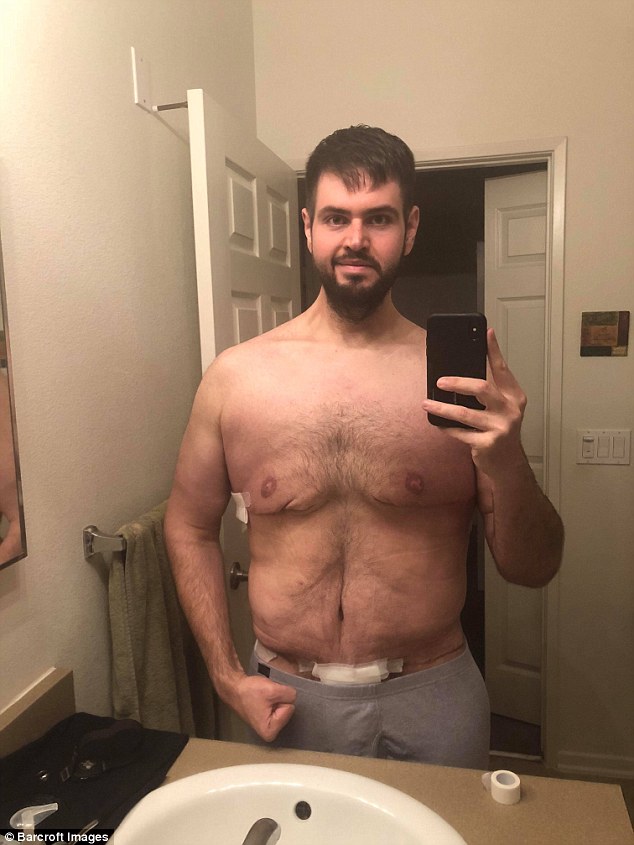 John Allaire, 27, from San Diego stands shirtless in front of his mirror following his surgery to remove excess skin. He says it’s a blessing to be able to move around freely and do normal things others take for granted, such as tying his shoelaces with ease 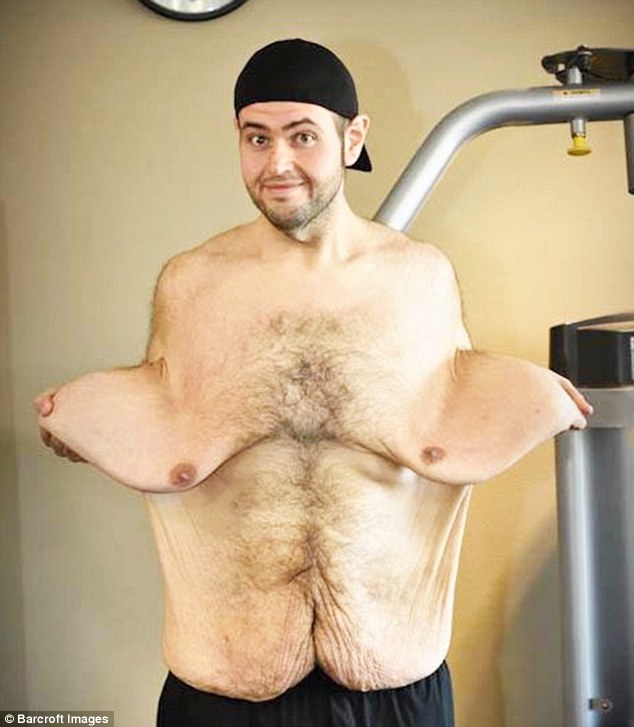 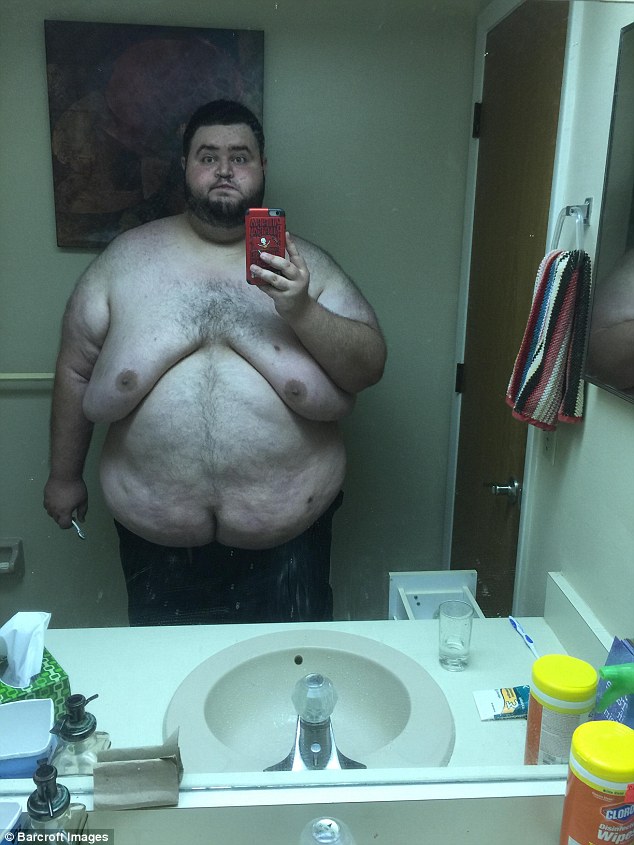 At his heaviest, John weighed more than 540lbs and was so heavy that the only place he was able to go to find out his weight was a fish market where they had commercial scales

Recently returning to the gym for the first time post-surgery, John has now spoken out about his long journey and his battle to overcome a dangerous relationship with food.

‘It’s one thing to be obese and it’s another thing when you reach morbid obesity,’ he said.

‘When I was about 20 years old I tried to go to the doctor and they couldn’t weigh me. So they found a fish market where I lived in Florida and I had to get weighed on a commercial scale in the back of a fish market.

‘There were people there and we had to explain why we were there, but I have no recollection of any of those interactions – I think I just completely blocked it out.’ 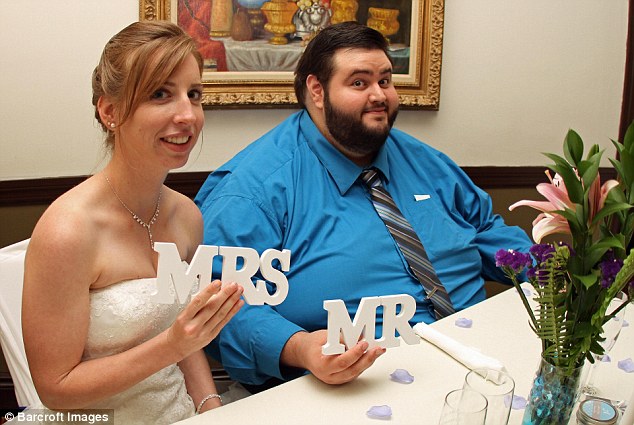 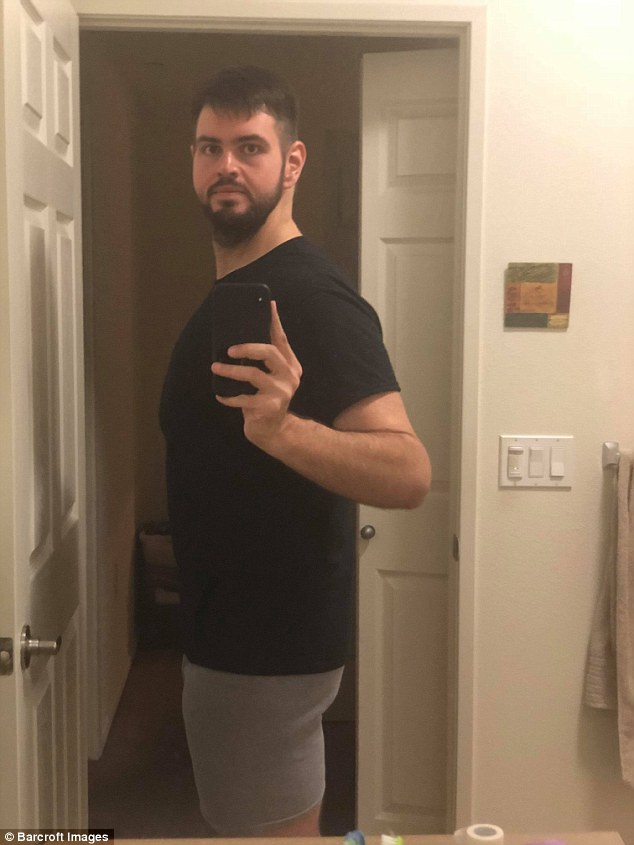 John Allaire poses in front of his mirror following skin removal surgery, which took place in March. He will have further surgery at a later date to remove more skin from his lower body

It took a long time for the Florida-native, who now lives in Japan with his enlisted Navy wife, to break his dangerous food habits – something he fully committed to only after becoming engaged to his high-school sweetheart, Caila.

He said: ‘Looking back at my eating habits, whenever there was a bad situation stemming from my parents’ divorce we would get upset and my mum’s answer was, “OK, let’s go to a super market and pick up an extra cake for dessert tonight”.’

These habits continued into his teen years, when John says he used food as a coping mechanism to deal with his dad passing away from cancer when John was just 18.

Within a year of his father becoming sick, John shot from 380 lbs to a staggering 500lbs – putting him in the category of morbidly obese. 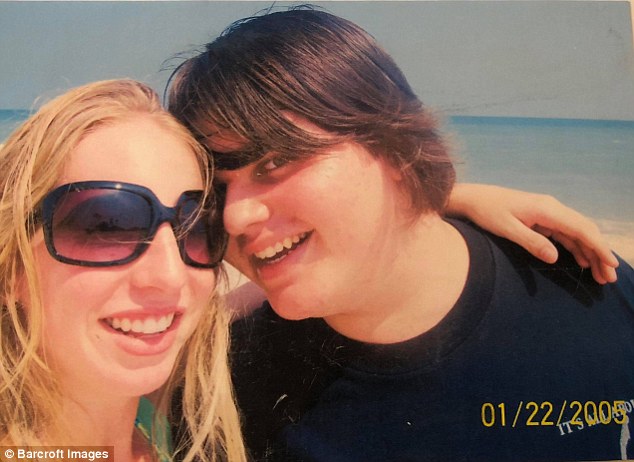 High school sweethearts John and Calia pictured together when he was 14. John had struggled with his weight since childhood, turning to food for comfort after his parents divorced 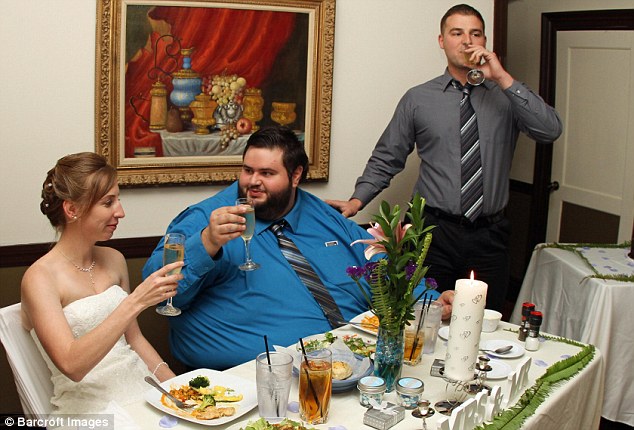 John Allaire and his wife Caila at their wedding. John was delighted that Calia loved him the way he was, but wanted to make a positive change so that he wasn’t setting her up for a lifetime of dealing with his health issues

‘I started skipping all of my college classes,’ he explained. ‘Every day when I was supposed to be going to college I would go to a fast food place, put on sports radio and just drive around aimlessly eating three to four meals-worth of fast food.’

Gaining this massive amount of weight took a toll on John’s every day life, causing him to break several couches and chairs, and even two toilets just by sitting down.

‘I didn’t fly for a period of 15 years because it just would not have been possible,’ he said.

At his heaviest, John says he was over and above 540 lbs – though, he doesn’t know an exact number because after the fish market episode, he stopped weighing himself. 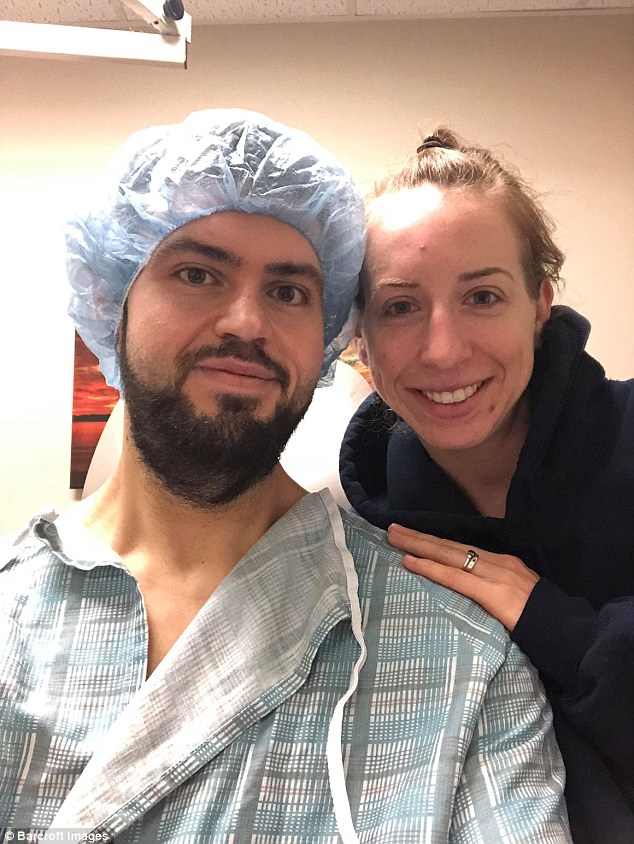 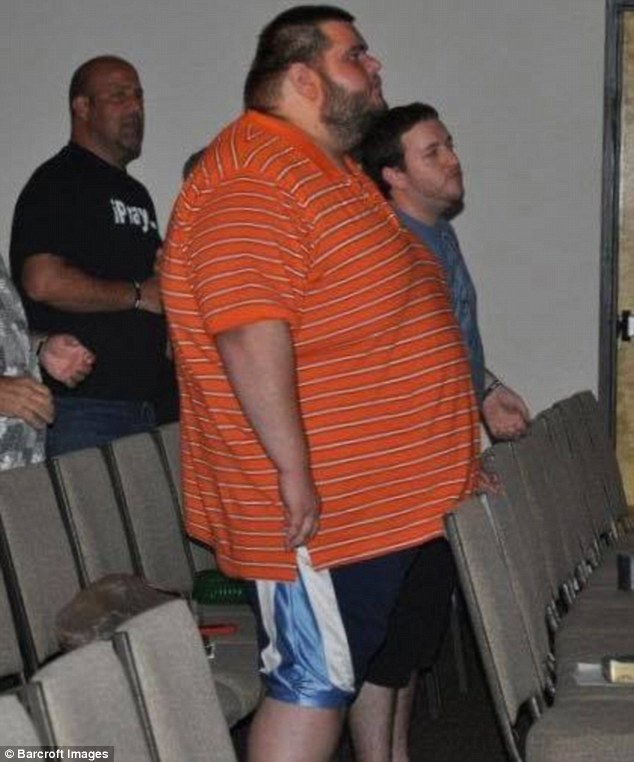 A younger John Allaire, before he lost hundreds of pounds on a special gym programme at The Camp Transformation Center in San Diego

It wasn’t until he became engaged to Caila, who he had known since age 12, that he started taking weight-loss seriously.

He said: ‘Even though Caila loved me as I was, and she was ready to commit to marrying me at 540 pounds, I was like, “There is no way that I can, in good conscience, drag this woman through the difficulties that I am going to go through the rest of my life if I don’t lose weight.”

After seeing an advert on Facebook for The Camp Transformation Center in San Diego – where he lived at the time – John threw out all his junk food and went along to the first session. 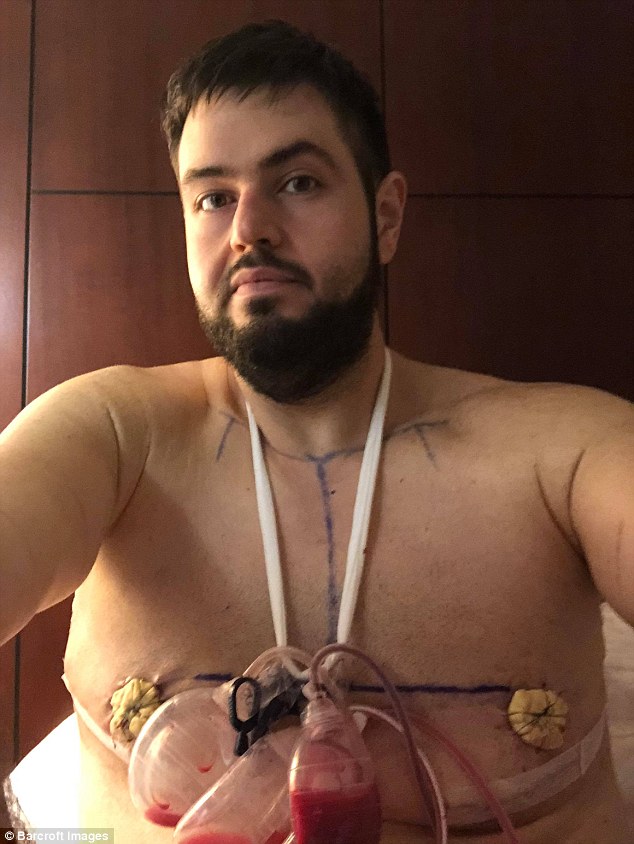 John Allaire, who lost hundreds of pounds and was left with severe loose skin, after undergoing surgery in March 2018 to have it removed

The programme promised attendees they would lose 20 lbs in six weeks, but John soon excelled, losing the initial 20 lbs after just week three.

He said: ‘Then it was like, “OK well I will see what else I can lose,” and I ended up losing like 30 pounds in that first six weeks.’

After 15 months, John had dropped an unprecedented 297 lbs – a record for The Camp and something that John credits to its community-focused approach and support system.

Gym Manager at The Camp, Tanya Sites, said: ‘A lot of people will lose half that weight and just be like, “I am okay! I am fine. I feel great. I lost a lot of weight. I am good”. 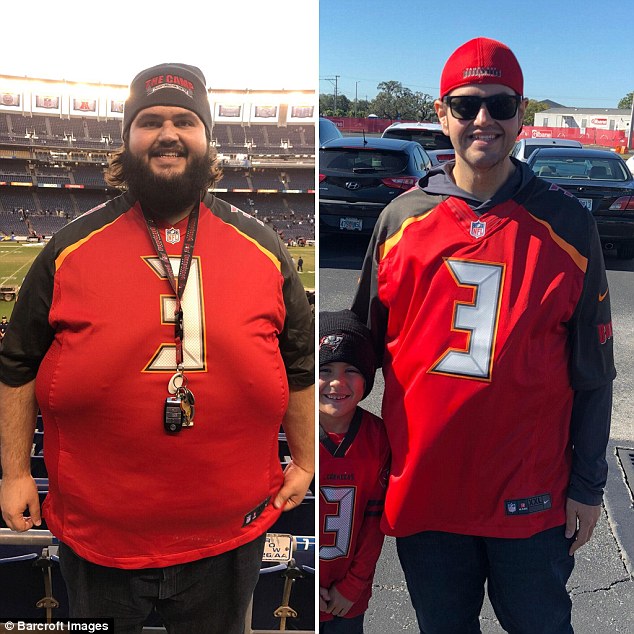 A side-by-side comparison shows John Allaire midway through losing hundreds of pounds, and the final result of his intense workout regimen

‘But he pushed himself until the very end, which is incredible. He is definitely the most successful participant.’

After his success at the gym, John was left with a new problem: almost 20 lbs of excess skin – a lot more than he’d initially anticipated.

Prior to John’s recent surgery, his wife Caila said: ‘I think his loose skin affects him in a lot of different ways. The surgery is just going to improve his overall quality of life. He’s finally going to feel completely free – there’s not going to be any baggage from his obesity.’

The 10-hour procedure was completed in March and saw the bulk of the loose skin on John’s torso and arms removed – though he will still require further surgery in the future to remove the skin on his lower body.

Returning to the gym in May this year, for the first time post-surgery, John was able to complete his intense workout regime without the loose skin and compression shirts weighing him down. 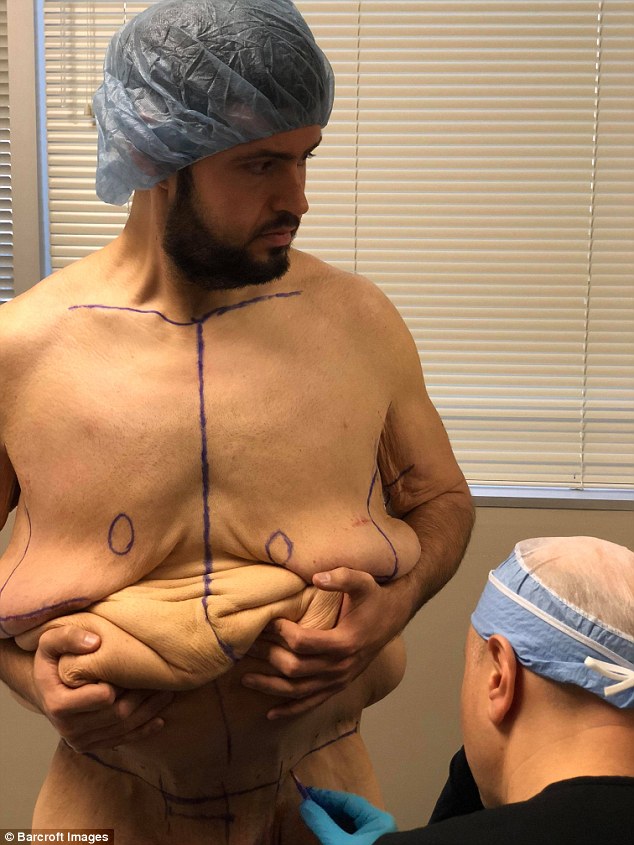 A doctor makes marks on John Allaire’s body ahead of a procedure to remove his excess skin in March 2018. John raised the money he needed for the surgery through a GoFundMe page

Following the session, John said: ‘The last six weeks I really missed not just being in the gym but being around people like Aaron and Andrew the trainer, and all the people.

‘So the exercise was one thing but I really miss the people and it was just great to see them again, even if I was not fully back I’m glad that I didn’t wait any longer to get back around with my friends.’

John still has some recovery to go through, and has to wear compression garments to help the post-surgery swelling go down over the coming year – as well as getting used to his new physique. 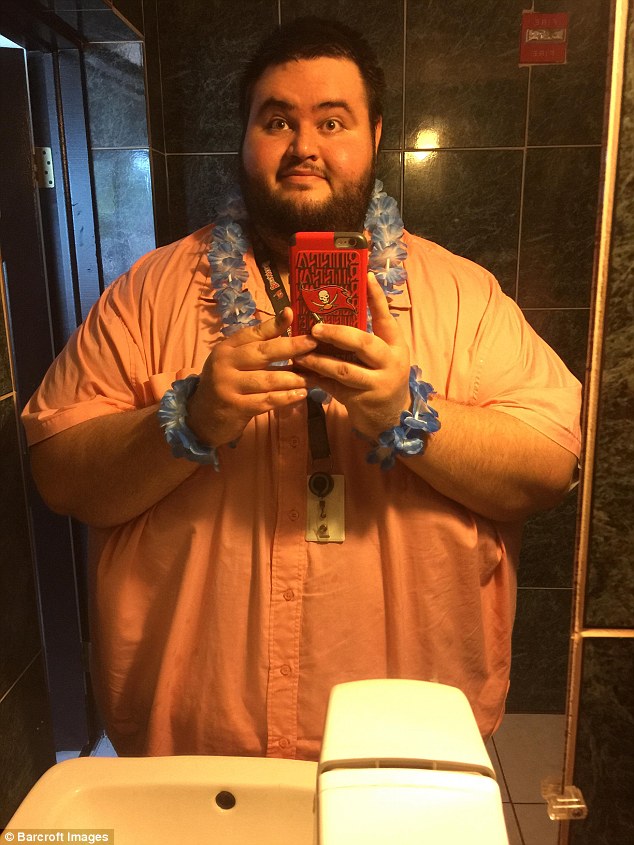 John Allaire, prior to his massive weight loss, posing for a photo. He admits his weight issues stemmed from using food as a comfort whenever he experienced problems in life

‘Having the skin gone has been a weird experience.’ he explained. ‘Now it’s becoming a great experience, but for a while it was kind of weird.’

‘I remember the first week my arm skin was gone but I could still feel it. Like, when I move my arm, my brain was feeling the skin was still there. I have to check it or like my wife said she still catches me adjusting myself and there is nothing there to adjust.

‘I was remarking to my wife just the other day, that it’s not lost on me how l can bend down to tie my shoe laces without thinking about it – without having to find a place to sit down and finagle my feet high enough to tie them.’ 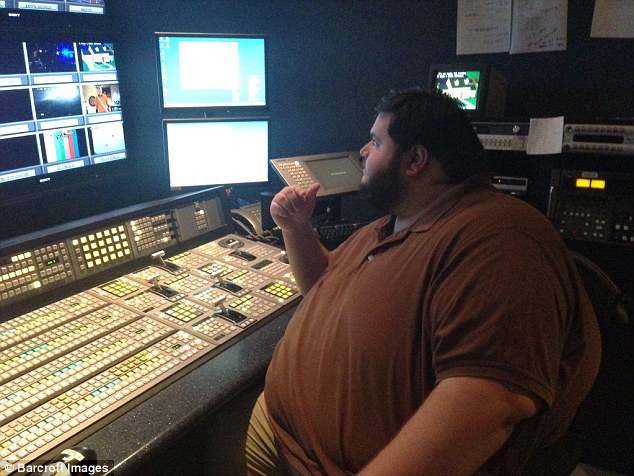 John Allaire, who would eventually lose hundreds of pounds, at his largest when he was deemed ‘modbidly obese

And after enduring an incredibly challenging, and often gruelling journey, he manages to remain both humble and grateful, and hopes his story will inspire others struggling with their weight.

He continued: ‘If you told me two years ago that I would be the size I am now and I could fit into a medium shirt, I would tell you you’re crazy.

‘The coolest thing is that it doesn’t really matter what your circumstances are, you can get out of it. I can 100 percent can say If I can do it, anybody can do it .’